The Sciacca name stands for Quality!

Two completely disparate things collided to make me come up with this post; a commercial heard on the radio on my car ride in to work (Dana took my iPod FM modulator thingy, subjecting me to two weeks of terrestrial radio, nearly unbearable) and then a song served up from Rhapsody on the Meridian system.

Coming into work on Tuesday, I heard that it was National Hiring Day at McDonald’s. Now, I’m not looking for a career change to the Golden Arches, but I thought that it was noteworthy that they were looking to hire 50,000 new employees across the country. Then this morning “Ode to My Family” by The Cranberries came on. This lyric: “Unhappiness where's when I was young, And we didn't give a damn. 'Cause we were raised, To see life as fun and take it if we can” is what specifically brought these two items smashing together. I was walking out the door humming the song and, POW! Blog topic!

So, why does McDonald’s founder Ray Crock look like Sinatra and how are these things connected? 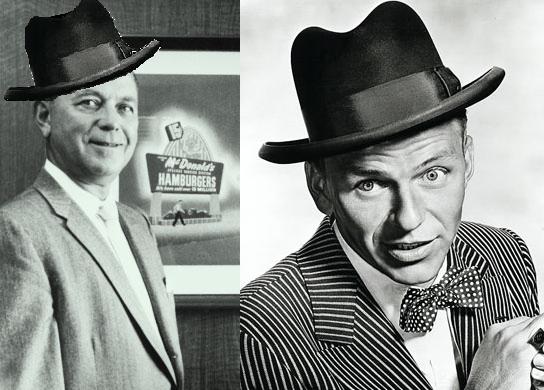 Well, I can’t answer the first question, I can address the second. But first we’ll start with The Cranberries lyric. Now, I wouldn’t so much say that my being young was total “unhappiness,” but I can say that my dad has softened considerably over the years. Probably worn down by the gentle, insistent rubbing of my younger brother. Like the way the Colorado River cut a little path through the Grand Canyon. And growing up in the Sciacca house we most definitely DID give a damn and we were NOT raised to see life as fun and take it if we could. Quite the contrary, we were more raised to see life as a series of jobs and chores that were to be performed as thoroughly and rigorously and perfectly as possible. When working, time was never of the essence; the job was the essence. And it would tell you when it was done. And then my dad would double-check. My dad was fond of saying things like, “The Sciacca name stands for Quality!” and “The Sciacca name stands for Hard Work!” and other quality is job 1 or Arbeit macht frei type slogans.

These little workers-of-the-family-unite! motivational speeches were often delivered immediately after I had sub-satisfactorily completed some job around the home. These jobs could include – but were by no means limited to – things like: sweeping out the gutters, sweeping off the driveway, bi-weekly lawn mowing, weeding, window washing, vacuuming, car washing, white-washin’ the fence for Aunt Polly, etc. My dad was a STICKLER for perfection in the home workplace. And he did not accept flimsy excuses like, “Dad! I can’t sweep the driveway! We’re in the middle of a windstorm!” or “Seriously? Mow the lawn? Again? It’s grown like a quarter of an inch!” And these chores were followed by “Inspection” where he would come out and oversee the job that I’d done and then offer numerous suggestions for improvement. (I remember my first job in the golf business; Bud – he of the great Bud-isms – asked me to clean out the cart barn. After several hours I came back up and he said, “John-boy! Where in the hell have you been?” “You told me to clean the cart barn out, Bud. So I swept it, then hosed it, then worked on the oil stains…” “Damn, John-boy! Son, I want to park golf carts down there, not have a party!” “Well, you want to come and inspect?” “In what?” Yeah. That’s when I discovered that not every employer was looking for the full brand of Sciacca Quality on every task.)

The lawn weed was frequently the bane of my dad’s existence, meaning that it immediately became the bane of MY existence. Weeds were not to be tolerated in the Sciacca lawn. Much like Augusta National, the lawn was to be a great source of pride and a statement of the Sciacca name quality or something. Seriously, as much as my dad obsessed about lawn care, I’m not entirely certain that our last name isn’t more like Sanchez or Santos. And far be it from my dad to use some kind of broadcast weeding or chemical treatment or anything. Why pay when you have readily available free labor at hand? Far better to have me pick the weeds. By hand. And then assemble them for easy inspection; presenting them in bundles. Of 20. For a total of 100. Per day. (True story...I used to invite kid's over to play. We would then play dodge ball in the back yard. Whoever got hit by the ball had to pick 5 weeds. Spoiler: I got to be quite good at throwing things!)

So, while I’m not sure how much I’m able to uphold the banner of the Sciacca name and its proud hard work and quality heritage, this might give you a wee insight into my work ethic, which I think is pretty strong. Which is what gets me to the McDonald’s part of the story...

When I was in high-school, a lot of kids got jobs at fast food places. In fact, teenagers and fast food were almost synonymous and seemed like the perfect Tetris-fit. These places always seemed to be hiring, you could work there at 16, they needed afternoon and evening workers, they didn’t care if you had any experience, you could learn a variety of skills, etc. Granted the pay wasn’t great, but the alternatives for an underage, inexperienced worker were pretty thin.

Today, however, it seems like a lot of kids have a giant chip on their shoulders about working in fast food. I suggested to one early 20s guy that he get a job at McDonald’s. He looked at me like I had openly insulted him or asked him if he’d like to come over and bundle weeds in stacks of 20s. He was too good for McDonald’s. (Apparently too good for a lot of things because he’s still unemployed.)

I worked at a fast food restaurant. Not McDonald’s, but Jack-in-the-Box. Was it a great job? No. Not at all. It was hot and sweaty and greasy and I hated the stupid white pinstripe down the side of the impossible-to-look-good-in jeans and the gay-ass visor. And everything that entered the restaurant left infused with a sickly sweet aroma of used oil and BO.

But I got a lot of great takeaway from it. In fact, it helped me buy my first car. And it taught me a lot about responsibility and being part of a team and showing up on time and being ready to do hard work. (I realize I’m kind of making it sound like being in the Marines or something, and, well, I certainly don’t mean to elevate it to that. I don't believe there were any Semper Fry tats or discussions of honor code or any of that. And I most definitely did not do more before 9 in the morning than you’d do all day -- well, maybe some of you -- unless you put an especially high value on brewing massive amounts of coffee and placing eggs on a croissants. And the firearms training at Jack-in-the-Box was remedial at best.)

But even today, in my job as a custom installer and journalist, uh, sorry, Jeremy, I meant *writer*, there are lessons from Jack that I still draw on. You learned how to handle a lot of stress in an ever changing environment. Like rushes of people that come in all at once, demanding different things, with interactions that change every second. The stresses today are different, but stress is stress and still needs to be handled. Like a wire that wasn't pulled to a location, or a cabinet measurement that got effed-up or juggling multiple jobs at once.

Jack was where I got my first giant taste of following directions from a customer and then delivering an experience. Today the encounters are much higher-end and the instructions given are a lot more significant than “I don’t want onions on that!” but the root is the same. People want to be heard and given what they want; whether that’s a burger with fries or a home theater system.You deliver a bad experience, they won't come back.

Fast food teaches you to work in an environment that is often times hostile; using your bare hands to remove food from 400-degree fryer grease, or having oil explode in your face because some prankster decided to secretly chuck in an ice cube or running the grill when it is summer and 135-degrees behind the fryer. Yeah. Tough. Similar to working in an attic in the summer. Or crawling under a house when it has been raining for a couple of days. Or pushing on past the 12th hour of a long work day to finish a project before the homeowners arrive. Hard work doesn’t have to be out breaking rocks or pounding in railroad ties, and fast food IS hard work.

With running a register comes experience with handling a lot of cash, which is certainly also a bridge to finding another job. For me, my time at Jack opened up the opportunity for me to get a job at a bank.

Of all of the jobs I’ve had, my time in fast food is definitely some of the hardest physical work that I’ve done. (Granted, my experience with laying asphalt, running a jackhammer or cleaning up the slop floor at the rendering plant are woefully limited.) And I think it should practically be a requisite for high school kids. Is it a career path? Maybe for some. I'm sure there's more than one person out there that started running the fryer and then advanced to manager and now owns a restaurant. But even if it is just for a summer, the lessons learned are lessons learned for life. I’ve already told Lauryn that she’s gonna be working at Chick-Fil-A one day. I think she thinks I’m kidding. She hasn't learned to fully embrace the Sciacca name yet. Perhaps she needs to go visit my dad...

Loading...
Reply Dani Escobar-Sinn
6:48 PM on April 22, 2011
Not only do people want to be heard and given what they want, people want to know that you care. If you work in an industry that provides a service to customers you need to remember that each customer is importnant. That is how businesses grow. We've all heard the statement "It takes a lifetime to build a reputation, and a moment to ruin it" well, this is so true when it comes to customer service. Trust me, if you treat every customer like they are your only customer, even though (hopefully for your business) they are not, you will go miles with them, and believe it or not, they will appreciate you for it