I’ll admit that it’s pretty easy to get jaded about cool toys as a technology journalist. I mean, we routinely see and experience systems that would make grown men openly weep like babies and make women utter contemptuous phrases such as, “Are you serious? There is NO WAY I will ever let you have that in this house. Ever.” I’ve sat through multiple home theater demos where the systems cost more than a million bucks, and where single components easily exceed the cost of my home. Look and sound amazing? Absolutely. But for that kind of money, you have expectations preset SO high that even just meeting them barely registers an impression any more.

Now, don’t get me wrong; I still absolutely LOVE tech and swoon over amazing audio and video, but a $200,000 projector – even when it is as bright as the sun -- or $30,000 a pair loudspeakers – even when they look cool as all get out -- aren’t really “game changers.” Impressive? Sure. Love to own them myself? Absolutely. But enough to impact the market in any considerable way and get me all hot and bothered inside? Probably not.

Game changing products have to do something so radically new and different that they are going to impact the market or change the way things work in a major way; things that will change and create business or the way that you perceive and view what is possible going forward. Kaleidescape’s hard disk movie server was a game changer. Apple iPhone/Touch/Pad was a game changer. TiVo was a game changer. The TV industry wanted to FORCE 3D to be a game changer, but, well, I’m not so sure they pulled it off.

Generally it is prudent to wait until the END of the show to declare something THE Game Changing product, and that is what I’ve done. But, from the moment I laid my eyes on it, I was pretty sure that THIS was *the* product. (And equal parts kudos and shame-on-you to Melissa Andresko for being able to hold this secret so close! Even when plied with liquor she didn’t drop so much as a hint!) Now that the show is over, I’m certain of it.

My most impressive introduction of CEDIA 2011 was Lutron’s new automated cellular shading system. 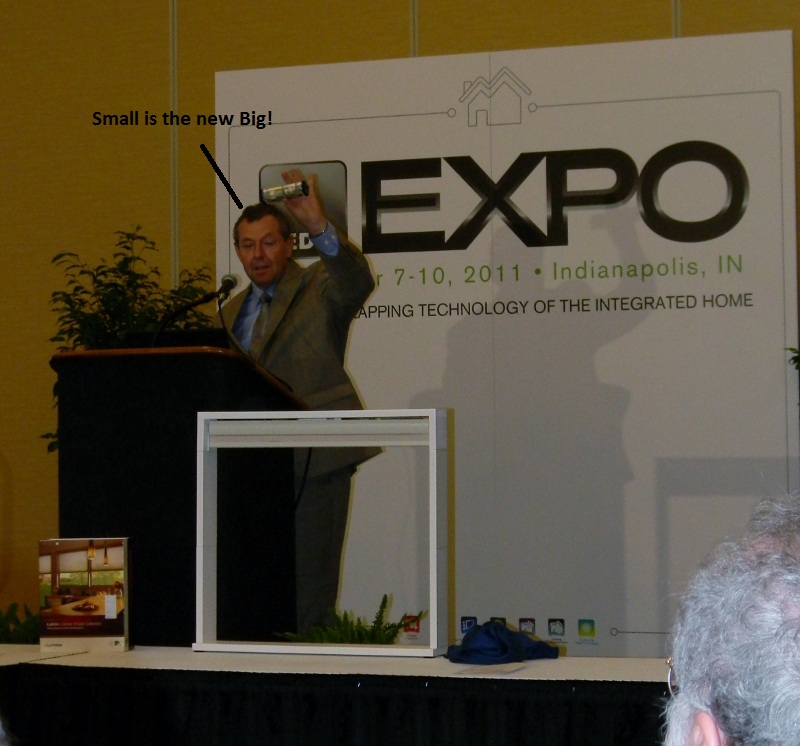 This will be a market game changer for the custom installation industry, allowing them to sell more shades on more jobs in more places in a way shorter amount of time. Quick, get in, get out, make magic and get paid “Wow!” that is going to gain them more customers and dollars in pocket. 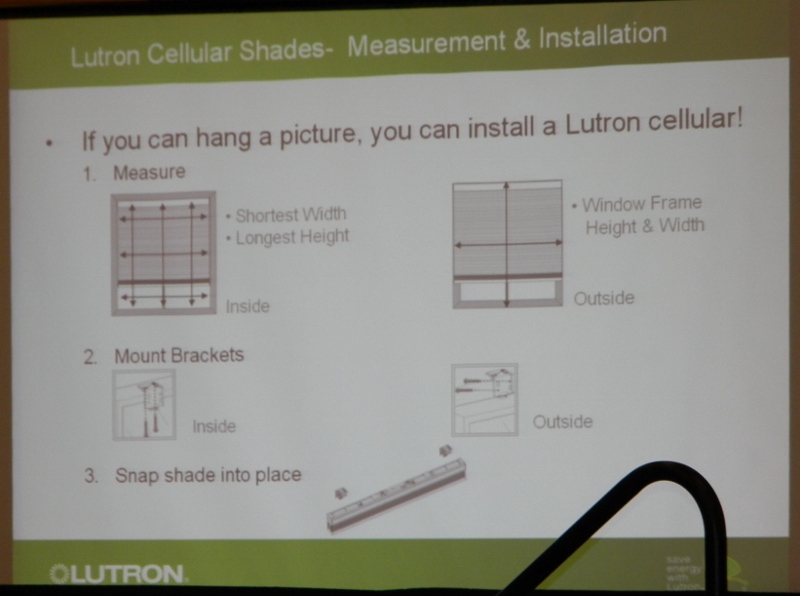 Granted, automated shading is nothing new; Lutron has had shading available for a while – as have others – and it has always been cool. But it has always been price prohibitive. By the time you factor in the shade, the mount, the drive (it's verboten to call it something as pedestrian as “motor” in Lutron-speak), the wiring, the power supply, and the controller, you are most likely going to be somewhere around $1800-2000 per window. Not including installation. And the thing with shading is, you don’t just do one window, you do like 10 or more. So what sounded like a great idea – “Wow! Automated shading! That sounds like a great idea! Let’s totally plan for that!” – during prewire, often becomes a, “Holy mother of God! Did you just say $20,000 for shades?!? Wha…wha…what are you talking about? No. That’s just too much. We’ll just have to forget the whole thing. I’ll just cover the windows with newspaper or something,” on the back-end. 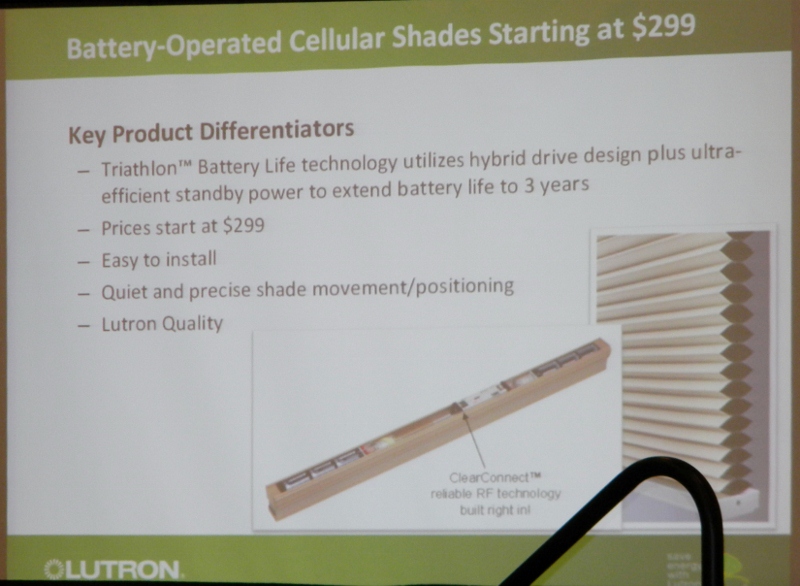 Under $300 for an automated, motorized shading solution. THAT is a market game changer. Think installers might be able to increase their business by selling 7 for the old price of 1? And because it runs on a battery, the install is basically screw-screw, snap-snap “Here’s your awesome new shade; can I get paid now?” and leave. THAT is a game changer. Think people might tell their friends about it after they are installed and see how amazingly quiet and cool they are, and then send more shade (and possibly light and other automation) business to the dealer? Game changer.

Even the power is cool. First, Lutron marketing named the power technology Triathlon, so you know it’s gonna be cool. 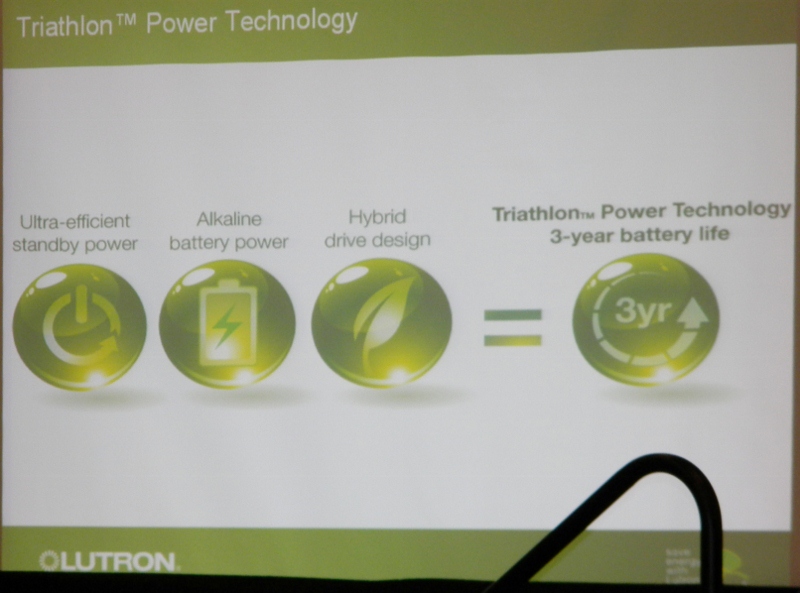 And, the thing runs on a single D-battery; a single…D…battery! (Or maybe it is SIX D-batteries according to comment below. I'm not sure. But, still, powered by some number of D-batteries.) That powers it for up to THREE YEARS! And in standby it uses 1/1000th of a watt! I’m not sure how that translates to much of anything but I’m pretty sure that just typing 1/1000th of a watt consumed more energy than 1/1000th of a watt. 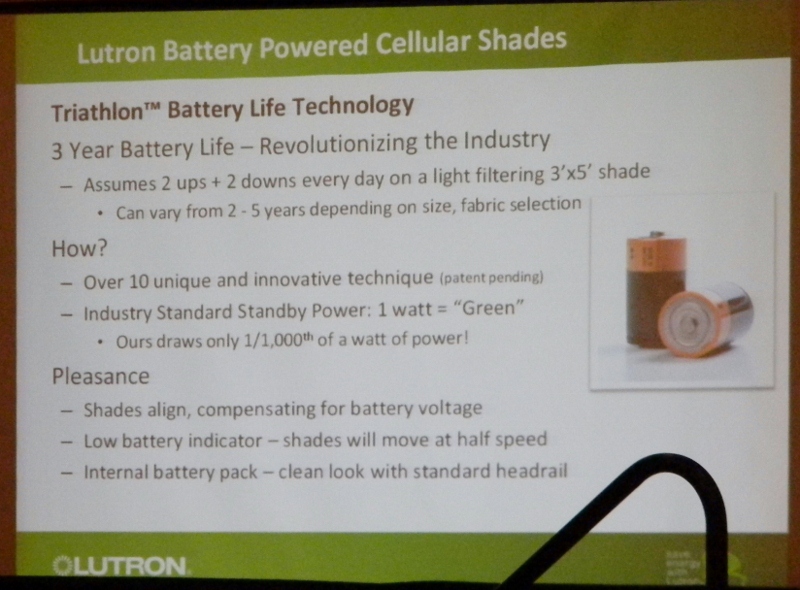 I’m not sure that the other members of the press corps fully and truly appreciated how amazing this is. The only other person that I know who TRULY got it was Darryl Wilkinson. (Well, apparently Brent Butterworth thought it was pretty cool too. He called it the Coolest home theater product of the show.) Darryl and I each have Lutron RA2 systems and have been flirting around with getting some shading for awhile, but even at major accommodation (I salute you, Major Accommodation, sir!) they were still just more than we could do. Because, again, shades aren’t a one window deal. When they announced the price, Darryl looked back at me, mouthed “Wow!” And then he gave me an obscene gesture.

This reminds me of the quote I heard from my dinner with Russound. Lutron has given the industry a game changer. Now, what are we going to do with it?


Is it? Well that would actually make more sense for the longevity thing. I must have missed that part. Thanks for the catch; I'll amend my text!
John

Reply Kirk
10:09 AM on September 19, 2011
Actually read about it on the S&V review blog. You ought to read those sometime, looks like a good magazine!