“Why, gramps? What was wrong with it?”

“What product was it for?”

And, I’ve gotta hand it to gramps, that’s a pretty good filter for judging ads still. Remembering that the ad had a hot chick in it or something-something rock star, doesn’t do the company any good. And when you’re talking about shelling out $3.5 million dollars for 30-seconds of eyeball time, then you’d better have that message on-track and on-point! (Sidenote: When I worked at the Country Club in my previous life, I would talk to some of the ad/marketing people about Super Bowl ads, and they would say how those ads are like the Holy Grail of advertising. That if you sold a Super Bowl ad, it was basically your baby for the entire year. You’d work on it, and perfect it, and follow-it and then babysit it and sweat it right up until the second it aired and GOD HELP YOU if it didn’t come across *absolutely* perfect.)

So, I thought I’d share my best and worst ads from this Super Bowl, because, well, that’s what I feel like doing today.

It wasn’t just that the Acura ad brought back their sexiest car EVER! No. It was that they brought it back with some awesome star power that felt like a mini-episode of Seinfeld. Besides Jerry running shtick (“You’re #1 in line? How about being….number $20?") you had the Soup Nazi and a variety of crazy hi-jinks. (Love the unzipping the alien body bag, then immediately zipping it back up, “Yeah, bad idea.") Then the Jay Leno fly-in at the end? Great. Super funny. And you knew it was about Acura the whole time and the awesomeness of the new car. A+ Here’s an extended cut of the ad which just lengthens the awesome:

Ferris. Bueller. I’d been totally waiting to see what they were going to do with this ad after the 10 second teaser I saw. I had no idea who it was even going to be for, but I was ready and excited. I *love* Ferris Bueller. (One of my Top 10 films. It’s an 80s thing.) And this ad *totally* nailed the key scenes from Ferris. I do wish they would have had a cameo of Cameron or Sloan or even Ben Stein, but the ad was still awesome. More awesome? This extended cut of it. While it doesn’t make me want a Honda CRV any more, I still give the ad an A+ for creative awesome.

The Super Bowl is often a great time to unleash the latest film trailers and gather some big, buzzy momentum. Last year saw Battle: Los Angeles, Super 8 and Cowboys and Aliens. (Of course, only one of them went on to deliver on the awesome. Well, I take that back. I liked Battle OK.) This year’s slate of “Hmm, that looks interesting” films were:

Battleship: My initial thought was, “Wow! That looks cool!” Immediately followed by, “Oh, God. A movie about the board game, Battleship? You just know they’re totally gonna screw that up.” I’m remaining cautiously optimistic and open-minded and hoping it will be good.

GI Joe: I loved GI Joe growing up. I would actually come home from high school and watch GI Joe, the animated series. And there are no Joes that I love more than Storm Shadow and Snake Eyes. And seeing these two guys receiving prominent ninja-on-ninja action in this movie makes me feel VERY hopeful that this will be a cool film. I’m not even letting the fact that the Rock is quipping out Jay-Z lyric’s temper my hope for this movie.

Act of Valor: The tagline should basically be “A movie for SEALs, by SEALs, about SEALs.” And when I hear the words "Navy" "SEAL" and "movie" I'm usually pretty much all in. This movie looks awesome, and received unprecedented support from NavSpecWarGru so I’m (fingers crossed) hoping this isn’t a SNAFU. But, seriously, how could it be? I’m not really going to see this for Shakespearian dialog. There will be guns. They will blow stuff up. They will be SEALs. And the Academy Award goes to…

The Avengers: It’s like all of these “stay until the end of the credits run…” things in the Marvel Comics movies are *finally* coming together and it looks like it’s gonna be pretty awesome! Even more amazing is that they managed to cram all of those egos into one soundstage. Either way, this will be a summer popcorn blockbuster. Already can’t wait for the Blu-ray.

Most “I don’t know what he’s pitching, but I’m still really interested”

Clint Eastwood’s ad for…Detroit? GM? Chrysler? The Halftime Show? Obama? Seriously, about a minute into the ad I said, “Oh my gosh! I think Clint is running for President!” It had all the, “Times are tough; we need to pull together and form a vigilante posse and bring back those outlaws and hang ‘em up and get this economy fixed once and for all. And I know just the man to do it. It’s me. I’m Clint Eastwood and I not only approved this damn message, I wrote it.” Notice that he never ONCE mentioned any car company directly, but rather just the generic Motor City, so from that standpoint, my grandfather would not have approved. Also, at 2 minutes long, this thing cost like $13 Million. So, nice to see all that bailout money hard at work.

VW’s ad for the (new? revised? resomethinged?) Bug or Beetle or whatever was kinda funny or whatever with the dog working out so it could slim down and chase the car. At first I thought it was an ad for a diet plan or, “Get off your bit, fat, lazy asses America! Join Gold’s Gym today!” But then when the ad “ended” and it cut to the Cantina? Brilliant. Any time you can work in Vader Force Choking someone, the commercial is a hit. (Though funnier would have been if they could have worked in that guy saying, “I don’t like you either...")

You may recall that last year’s Bowl saw Best Buy rolling out an ad for its “Buy Back” program. And while the ad featured Ozzy and had Bieber calling himself a girl, the program itself was a nightmare for customers. (See my blog on why the Buy Back is NOT a best buy.) This year’s ad was much more generic, touting mobile phones. And if there is anything that CES taught me this year – besides the fact that virtually EVERY company has a new line of headphones – it’s that mobile phones are hot, hot, hot! Also LOVED the Words With Friends plane homage to Alec Baldwin. Nice.

These guys used to spend millions battling it out at the Super Bowl and this year they each put up a couple of spots. While I prefer Coke in my glass, Pepsi put out the WAY better ads this year. Coke, that polar bear is played, yo! Move on to something new! I probably would’ve appreciated the first Pepsi ad more if I had any idea who the girl was (X-Factor? Idol? The Voice? Something?) but I loved the Flava-Flav cameo at the end. The second ad with the Coke driver winning Pepsi for life and Regis (“I’m BACK!") was cool. Though, to give my gramps props, if you watch that ad again and have the sound down, you pretty much mainly see Coke’s logo for the majority of the spot. So, probably a fail there.

Bud Light Platinum. Really. It’s another Bud Light. Big deal. Not gonna buy it. And a bright blue bottle that can announce to the whole world that I’m sippin’ a Lady Beer? Yeah. Not helping. (I did like the “Weego” ad OK. But still not trying Bud Light.)

Not gonna buy it, but still, respect.

KIA’s ad for the Optima was pretty good. Featuring Motley Crue, Victoria's Secret model Adriana Lima, cage fighter Chuck Liddell and a midget, the ad was definitely entertaining. However, I doubt that anyone having the ULTIMATE dream is actually gonna picture themselves in a KIA…

Forget about Go Daddy. I’m over their “Eww, we’re so provocative! Our ads are just too hot for TV! Go to our Website and see what we weren’t allowed to show!” spiel. This year three ads had the most blatant sex appeal, Teleflora, Fiat and H&M. I thought the Teleflora spot – with Adriana Lima, the “celebrity” winner this year – was the best. Give flowers, get, you know. The girl in the Fiat ad was hot, but I think the ad would have been better suited showing that cool Fiat doing something, or maybe some subtitles of her talking tech specs or something. And, well, I guess the ladies probably liked the H&M ad with Beckham, but I’m guessing that the biggest purveyors of men’s underwear are men, and I am certainly not motivated to buy underwear because I saw Beckham wearing them. In fact, I would probably specifically NOT buy underwear because I saw them in a sexy-guy ad.

Most, “Oh, I thought that was for something else”

The Chevy Sonic ad that shows the car doing all manner of tomfoolery – bungee jumping, kick flipping, enduro racing – ended and said it was for Chevy. But throughout the whole commercial all they said was “Sonic, sonic, sonic.” So, when it ends, Dana says, “Oh, I thought that was an ad for Sonic Drive-in.” So, nice free plug for you Sonic!

Anyone that saw the movie Total Recall with remember Kuato. Kuato was that weird head-thing that would come out of that guy’s stomach and make prophesies or whatever. Kuato was weird and creepy but it was sci-fi so you rolled with it. The Cars.com “Confidence” ad made me think of Kuato, and not in a good way. Some weird random head growing out of a guy’s back singing in falsetto? No. Not at all. 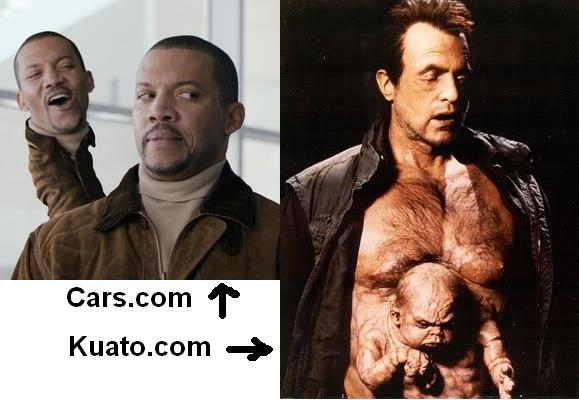 Weigh in. What were your pics and pans? And if you haven’t read my Super Bowl Beer round-up, now’s your chance!