Several years ago, a new company burst onto the scene with a completely new take on the solution to making smart remote controls more smart and a lot less complicated. That company was Harmony. (I can recall being at Harmony’s first press conference. It was basically just company founder and CEO, Bryan McLeod, and I in this small room at CEDIA. I had done one of the first reviews on Harmony’s remote at that point and he asked me for any tips about giving press conferences. When I saw Bryan at CES few years later, he had sold Harmony to Logitech, was working on a new start-up and was wearing the biggest, most gold and jewel encrusted Rolex I’ve ever seen. So, I guess you could say that things worked out pretty-OK for Bryan...)

Anyhow, Harmony did a few things that were really game changing for the remote control space.  There were lots of remote controls around at the time but most had difficult programming and questionable end-user experiences. Harmony came up with the concept of Activity-based control, which makes total sense to a non-techie user.

“OK. But now say I change my mind and want to watch a movie. I probably have to turn everything off and….”

“No. Just press the button that says, “Watch a Movie.”

The next big thing that Harmony did was to simplify the programming and initial set up by a totally unique “interview” process that asked easy to answer questions.

“When you watch a DVD, what input does your TV and receiver need to be on?”

Yes, yes, these are simple things for even semi-skilled programmers to do, but for the average, never used a macro -- “May-crow? What’s a may-crow?” “It’s pronounced mah-crow. Macro.” “Oh. Well what’s that?” – before user, it was a God-send as it would take all that information and automatically set up the string of commands needed to activate a modern A/V system.

But the REAL thing that Harmony added that was such a boon to users was something stupid-simple: A help button.

Harmony figured out that no matter how well they designed a remote, at some point, something – *cough* the incompetent user *cough* the stupid cable box *cough* -- was going to mess it up. (Of course, there ARE ways to more insure things don’t get out of whack. Radio frequency, and power sensors, and RS-232 and whatnot; you can read more about those things in my rebuttal of NY Times writer, Farhad Manjoo, and his ridiculous piece on the sorry state of remote controls.)

So, knowing that something was going to get out of sync, Harmony came up with a simple way to help users get their systems back on track. Press the help button. And the help button doesn’t really do anything magic. It just spits out the input commands for that activity. If that doesn’t work, then it starts an on-screen interview. “Is this on?” “Is that on?” “Is this on this input?” Answering no to a question makes the remote spit out the appropriate command to address that issue. The customer simultaneously gets his system “fixed,” feels like the smartest guy in the room AND doesn’t call you, the installer. It’s a three-peat of Win.

But despite the fact that users seem to love it and it actually TOTALLY helps to prevent some of those, “That system you sold me is broken!” phone calls, the concept of a Help button hasn’t really caught on with any other manufacturers. (URC included it briefly on the MX-810, but, alas, the button vanished with the remote.) And most higher-end systems eschew Harmony for other brands, like say the URC (Universal Remote Control) MX-series. But, good news! Most any modern remote control has so much memory – capable of hundreds of pages worth of commands – that it can easily support a custom made Help function. And with just a wee-bit of programming creativity, you can add this feature to your remotes!

Even better….I’m going to show you how! (Huzzah!) I'm using the URC MX-980 as an example because A) it is the remote I personally use and B) I happen to love this wand-style remote and C) it offers a great deal of programming flexibility. However these steps will work for any remote that allows multiple page programming and programmable button and page flips. (ie: pretty much any decent remote you would buy)

Step one: Add a help button to each page. Pick a simple icon like a “?” or that exclamation point in a triangle symbol or just a giant word “HELP.” 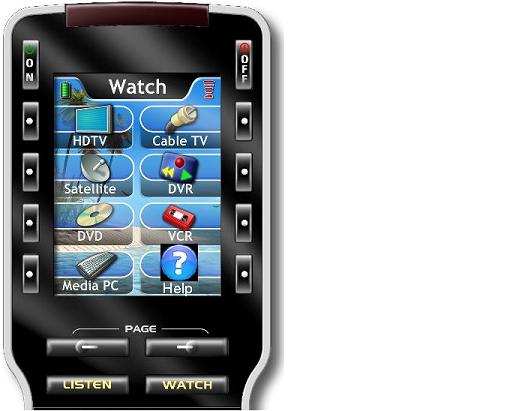 Step two: Be consistent! Keep this button in the same location of every page of every device. This makes it easy for user’s to know where to look when they actually need/want to use it. A help button that isn’t easy to find isn’t very helpful. 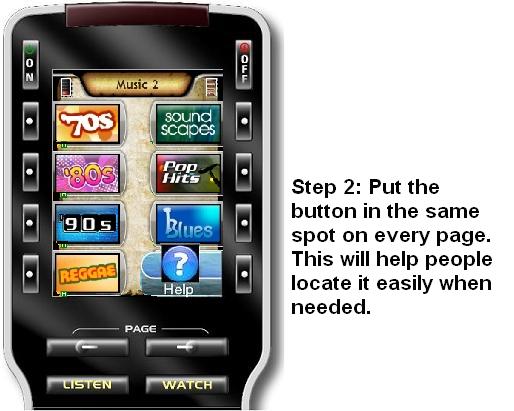 Step three: Program the Help button to reissue the activity macro command. Generally when something gets out of sync, it is when an activity is just starting. This is because the remote is issuing the most commands at this point – TV power on, TV input, Receiver power on, Receiver input, Cable box on, etc. – and if the remote isn’t pointing towards the electronics for the duration of this, a command can easily be dropped. Also, some components have lengthy wake-up delays and can “miss” a command in this state. Having a button that just automatically reissues all of these commands will likely resolve most issues. Also, toss in a page flip to the second level of help…

Step four: The thing that most often gets out of whack is something – I’m looking at YOU, Cable Box! Would it kill Motorola or Samsung or Scientific Atlanta to add a discreet power command to their box? – not powering on. This is the obvious first choice to start troubleshooting. Give a list of components that SHOULD be on during the activity, like the TV, Receiver and Cable Box for the Watch TV activity. Touch the device that isn’t on, will probably solve the problem. If it does, great, a “Problem Solved” button can flip them back to the activity they were in. But if it doesn’t, the “More Help” button takes them to the next page. 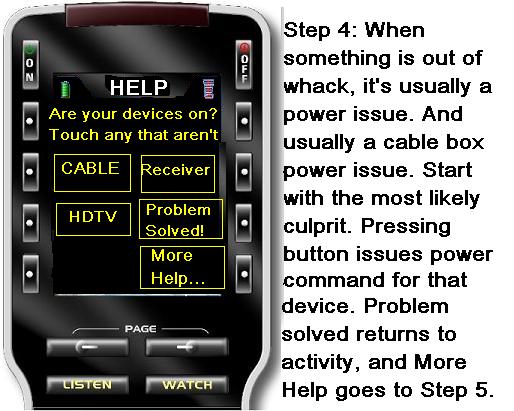 Pro tip: Add the input flip macros back into the “More Help” button. If something was off, there is a HUGE chance that when it came on, it was on the wrong input.

Step five: By this point the devices SHOULD be on and SHOULD be on the correct input and everything SHOULD be working. If not, well, this might not be an easy fix. Giving them buttons to issue the input flip commands – again – will allow them to go up and LOOK to see that, “Yup, that says TV/Sat.” Again, “Problem Solved” takes them back to the activity, and “More Help” on to next page. 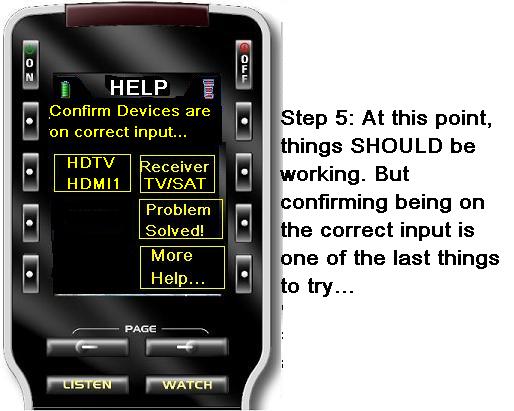 Step six: OK. If it isn’t working now, they are probably in for a bigger problem. But, there are still some last ditch things. Like, say, rebooting the cable box. Beyond that, include a number for the customer to call to reach you for additional help. 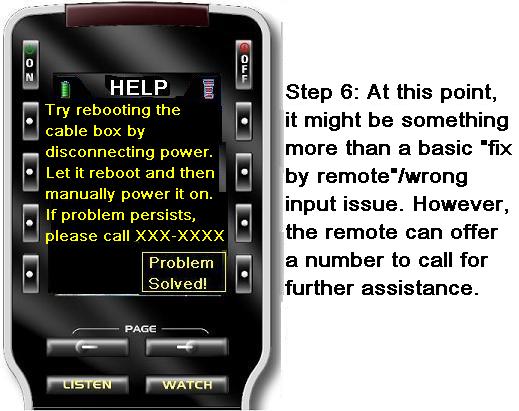 The length of time it will take to add this extra step to a project is probably around 10 minutes. If that makes the system easier for a customer to use – and saves even a single phone call – then it will have been WELL worth it!

Reply Darryl Cherry
12:02 PM on March 4, 2012
I am still amazed at the amount of end-users that DONT have a Harmony or better universal remote. The amount of headaches that retailers/installers save by just putting one in a person's hands ... its the simplest thing on the planet! And the Harmony One is what, sub $200? Obv, the higher-end consumer should be into URC territory, but still....such a no-brainer! Your programming tips are great, thanks for the insight!