How full is your glass?

As a custom installer, there are A LOT of market conditions that make it easy to be pessimistic about right now.

Many companies have gone out of business.

Those that remain have sales figures that often look like a giant, upside-down V, peaking somewhere right about 2007.

More and more people are choosing to shop on the Web and buying at prices that are often not only unmatchable but occasionally under wholesale cost.

Video is essentially a throw-away, lost-leader, profitless item that many have actually just completely given up on selling. (When I first heard about dealers discontinuing TV sales altogether and just telling customers to go and pick something up at Best Buy, I thought it was a horrible business mistake. Now, when I see Best Buy or Costco routinely pricing things below my wholesale cost, it is an easier proposition to understand.)

The iPhone and iTouch put touchpanel sales on life support just long enough for the iPad to come along and pull the plug on most expensive, dedicated touchpanel controller sales.

Even distributed audio systems – long the complex, labor intensive, programming-rich gold and diamond vein that installers mined over and over – are becoming increasingly easier and more DIY.

So, yeah. There’s a lot to be negative about.

And I had a sale the other day that I was initially pretty excited about.  It was a redo for a client’s home theater system that we had initially installed about 10 years ago. We replaced his projector and ceiling mount, retro’d in a 10-meter HDMI cable, ripped out and replaced his A/V receiver, removed his dated Niles IntelliControl and put in a new URC RF system, added a Blu-ray player with Netflix and rewired everything for HDMI. With all of the new parts – including a Runco projector! – tax and labor, it was an $8600 sale. Not too shabby. 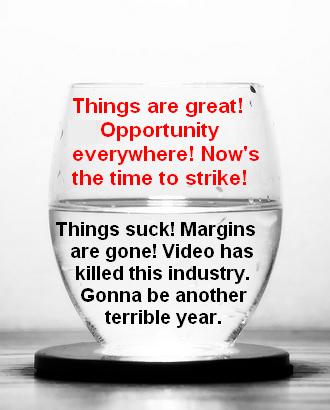 “Eighty-six hundred?!” I thought. “That’s nothing! That is almost $1500 LESS than the price for JUST the projector that we originally installed! A few years ago this would have been at least a fifteen thousand dollar sale, easy!”

Then I took a mental step back and realized that I could just as easily look at this in a whole different light.

Sure, I didn’t make as much money on this sale. Sure things have come down – WAY down – in price. But it’s not a few years ago. It’s today. And, wake up, people, things ARE different and they AREN’T going back.

So, what good news can we glean from this?

First, yes things are cheaper, but this can be used to your advantage.

There were lots of customers out there that might have *loved* the idea of a large, projection screen, true movie experience, but just couldn’t afford the $20,000 price of admission that it required several years ago. But now that *good* two-piece systems can be had for $5,000 and less, this is an entirely new market to go after. Think that these people wouldn't be thrilled to find that high-end performance -- like Runco -- is now within their budget? And these are systems that people aren’t tackling on their own. Systems that require professional installation assistance. Systems where you can get in, install something super impressive, quickly focus and dial-it-in, and leave them with an amazing experience that they will not soon forget and a nice check in your pocket. Also, this was a customer that elected to ditch a projector and upgrade instead of replacing a lamp; a decision he likely wouldn’t have made had the projector been $10,000.

Second yes things are cheaper, but they have also gone through many improvements in the past few years.

Third, yes prices ARE cheaper but this has opened up an entirely new world for possibilities for automation.

Cool tricks like lighting, HVAC, security and shading control used to be WAY expensive propositions. Doing even a moderate sized home would easily require a 5-figure budget that was beyond what many non-1%'s would consider. Now with systems from Control4, Lutron’s RadioRA2, URC and Crestron’s Prodigy, you can offer clients cool tricks for a fraction of the price. Put together a packaged system – say a thermostat, X-number of light dimmers and maybe some shading, security or door lock control – that you can offer to people. That way automation isn’t some ethereal, nebulous concept but a fixed, “THIS is what it is going to cost to automate your home” proposition. And these are systems that aren't going to be gobbled up by the Internet or Big Box stores. Systems that require integration that is right in the wheelhouse of the CI industry. And if you haven’t looked into selling Lutron’s new Cell Shade system – with prices starting under $300 – you need to strongly reconsider. Motorized shading is one of the coolest tricks going, and something that people aren't going to find on the Internet. Here's a video of the shades in action in my home.

Fourth, yes video margins are now thinner than the blades on a Schick Quattro...

...but with Sony, Panasonic and Sharp each posting multi-billion dollar losses last year due to plummeting video pricing, don’t think that this is lost on them either. They are all looking at new ways to revitalize video profits, and need high-end CIs to sell and install these premium sets. Word is that Samsung is also looking at ways to reign in the Web price butchering which should provide CIs with a more level selling field. And whether it will be larger screen sizes, OLED, 4K resolution, glasses-less 3D, video chat or something else, you can rest assured that a new technology will be always around the corner vying for consumer dollars.

Fifth, yes, A LOT of companies have gone out of business.

Some of them were quite good and capable and failed through little – or no – fault of their own. And that sucks. But, let’s be honest. This market got glutted with “professional installers.” (And I don’t think that those small, simple quotation marks can possibly convey the dripping with sarcasm and contemptuous tone with which I am actually writing that phrase.) For a while there, when construction was really booming and there was WAY more work than anyone could handle, new shops popped up literally overnight; like horrible, poisonous lawn mushrooms that tried to choke out the beautiful, luxurious grass. Anyone with a truck/van, a tool belt and a magnetic decal was suddenly calling themselves an “AV Installer.” We have run into jobs where people told us that their flooring company or plumber did the work because “they had a guy.” Well, a lot of this work was terribly done and it reflected badly on the entire industry. There’s a lot of clean up out there, boys and girls, and it doesn’t take much to go in and *really* look good when you find a system that is often held together with little more than electrical tape and hope. Besides winning over a new customer, you’ll also likely find these systems were grossly undersold to begin with and can use all manner of upgrades.

Sixth, OK, you probably aren’t gonna sell nearly as many $1000 touchscreens as you used to.

And, yes, that sucks. The iPad, iPhone and iTouch were all giant punches-to-the-jeans of the control market. But people love their iPads and they aren’t going away any time soon -- with a new one expected to be announced this week -- so we’ve got to stop fighting it and start embracing it. Nearly every system we sell now offers some kind of iPad control option. Embrace that and use it to sell things you CAN sell and make money on. “You probably already own an iPad; what if I could show you how you could use it to control your lighting or HVAC or your music collection?” I sold a three zone Control4 system this past week because the customer came into our showroom and saw our iPad lying around and mentioned that she loved her iPad. Just like that. iPad has definitely closed a door but opened up a bunch of windows.

Seventh, when price becomes a common denominator, what is the differentiator?

The Internet is making it fast and easy for anyone to shop and compare pricing. And when we ultimately get to a point when pricing on components is the same across the board, what will be left to separate you from a soulless click-to-buy experience? It will be your knowledge. It will be your experience. And ultimately it will be the thing that has always been the number go-to tool for the Custom Intstaller: your service. (I urge your to click that link and read that post. For the terrific Robert California quote if your no other reason.) This is something that the Internet and the Big Box stores can never match or harness. It is your number one asset. Make sure you tap into it, use it and deliver it.

Sales might not be falling into your laps or beating down your door like they did in the past, but by adjusting your outlook, plenty of new opportunities abound. Will 2012 be the year of rebound and recovery or another year of regret and recession? Glass half-full or half-empty. The decision is yours to make...

Reply Slavik
12:18 AM on March 6, 2012
Good points. Since things are waaaay cheaper now I finally have been able to finish my audio system and get Lutron lighting and shading! Well, only in 2 rooms for now. I?m still working out some kinks with my dealer. I've heard of Lutron before but really got interested when I came across your site from a DefTech email I received a while ago and came across some of your Lutron blogs. Nice video of the cellular shades. How much do they scrunch up on the bottom when they are fully closed? Can?t tell in the video.

Slavik says...
How much do they scrunch up on the bottom when they are fully closed? Can't tell in the video.


Scrunch up on the bottom? And by "closed" do you mean down (no light coming in) or up (window exposed)? I wouldn't say they scrunch up at all. When fully closed (down) the hem bar lands perfectly on the window sill, plus you can adjust the open and close limits in programming.

I had an issue with several of the first run of shades---they weren't cut long enough and they didn't go ALL the way to the bottom of the window (short by like 1-inch on like 3 and the glass door was short by like 8 inches). Lutron sent me new shades and they have started adding a wee-bit of extra fabric to make sure that this doesn't happen any more.

Thanks for reading!
John