The W: Why? What went wrong? Wanked! Wendy's!

Last night found me taking the family out to dinner. And, well, not a nice dinner, mind you, but a dinner all the same. We met at Wendy’s before attending a religious service at 7:00.

Lauryn was thrilled because she could get chicken nuggets and fries – tan colored food; a child’s best friend!

Dana was at least 51% excited by the prospect because it meant that she wouldn’t have to make any dinner and she likes the potato and the Caesar side salad.

And me? I was excited because I was going to finally splurge and try: The W.

When we founded Custom Theater and Audio lo those MANY years ago – I joined in ’98 – our store was in a location about 200 yards from a Wendy’s. And despite the rather off-putting, pubic-like quality of the chin-beard of the woman running the drive-thru, my partner, Al, and I have many a lunch at Wendy’s. (I will say, that woman ran that drive thru like an Indy pit crew. Chin beard and all.) And I actually like their burgers. But usually I limit myself to the “Cheeseburger Deluxe” from the $.99 Value Menu. For under a buck you get a decent-sized patty, lettuce, tomato, cheese, onion , ketchup and mustard. It’s not gonna put Five Guys outta business, but then again, my cheeseburger, medium fries and medium drink at Five Guys last week cost me $11.91 which could put ME out of business.

So, I like Wendy’s.  And I was pretty impressed with the ad campaign of their new “The W” burger. I mean, look at this thing: 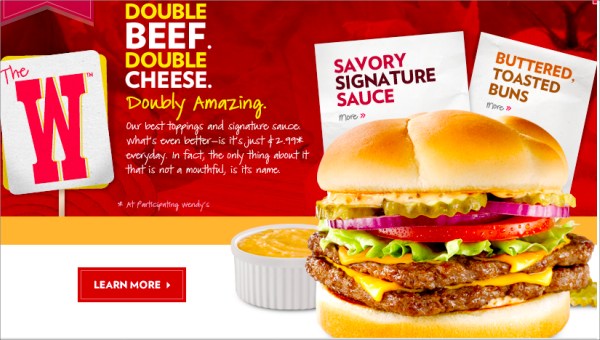 Looks delish, right? It is like the quintessential image of what a perfect cheeseburger should look like. (OK, I give you that some criss-crossed slices of thick, hickory smoked bacon would be a welcome addition, but I think we're getting off track.) Nice, huge patties of beef. Oozing, slices of cheese. Thick slices of red onion. Nice wedges of dill pickle. Beautiful looking fresh garden tomato and crisp lettuce. That burger is a frickin’ symphony and I’m ready to let it play men. “Doubly Amazing”? I say bring it! Doubly!

According to Wendy’s website: “When it comes to the new "W", we've crammed in the best for less. We're talkin' two patties of 100% pure beef, two slices of American cheese, thick-sliced tomato, and our savory signature sauce — all on a buttered, toasted bun. And at $2.99*, big flavor doesn't have to mean big bucks.” (I guess I got asterisked because my The W was $3.29.)

So I get to the Wendy’s last night and decide to eschew my usual two value Cheeseburger Deluxe’s (total cost: $1.98 )  and instead treat myself to the luxury and culinary delight which is the promise of The W's ad campaign (total cost: $3.29).

Before I order, I ask the counter guy, “So, have you had The W yet? Is it pretty awesome?”

“Really? I can’t believe they wouldn’t have everyone try it so you could say how amazing it is.”

I liked his sense of humor. Give me a The W, my man!

So I get it and it comes positioned vertically in this paper box-holder thing. The presentation and wrapping is retro, like what you’d get at an In-and-Out burger. So I get it back to my table, sit down,  and open it up and it looks like this: 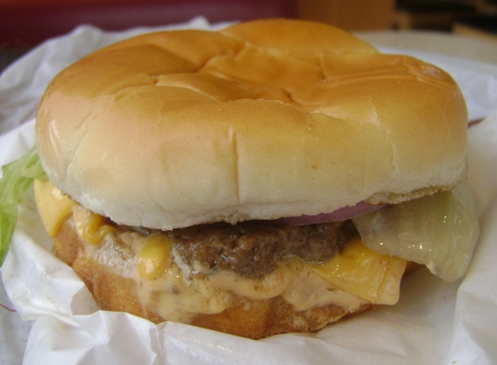 Now, to be honest, that is NOT a picture of MY burger. That is a picture of someone else’s W. I was actually so pissed off and disappointed, that I didn’t think to take a picture. I kept staring at the guy at the table over, trying to look at his burger, to see if maybe I just got played on a short con. Then I stared back at the picture of The W that was glaring at me from the front of the restaurant to see if maybe there was a large disclaimer that said, “WARNING: YOUR BURGER WILL NOT RESEMBLE THE ONE IN THE PICTURE! THIS IS MERELY AN ARTIST’S CONCEPTUAL DRAWING OF WHAT A THE W BURGER *MIGHT* LOOK LIKE AND IN NO WAY REPRESENTS THE BURGER YOU MAY OR MAY NOT RECEIVE!”

But the picture is a 95% accurate representation of The W that I received. Small, grey meat patty with a root-stalk piece of iceberg lettuce. The biggest difference is that I believe I see a *hint* of red onion poking out of his burger. Mine had none bits of red onion. Just some white onion. The castoff, bastard step-child of the onion world, forced to live a life underground, grifting food and surviving on the mean streets of Onionville. Take a moment, if you will, and scroll back up and look at Wendy’s promotional picture of the W… Go on… I’ll wait…

Do you see ANY resemblance between those two pictures? The top burger looks like a frickin’ super model. Seriously, if there were a world where Keira Knightley was a cheeseburger, she would be portrayed by that picture. The bottom one looks like something that fell out of a garbage truck, got run over, was pecked on by vultures for a bit, before it was picked up and thrown back into a trash can filled with discarded needles and medical waste where it sat festering in the sun for a while before it was eventually discovered by a bum. He was excited at first, until he unwrapped it and looked at it and then threw it to a mange-riddled dog and scowled, “Even I have my standards!”

I ate the burger in four bites. FOUR. That tells you how small it was. Granted, it tasted fine; I have no real gripes with the flavor. I’m not a huge fan of the “savory signature sauce” which seems like it hails from or very near to the land of the 1000 islands, but it was fine. What I’m put off by is A) it looked NOTHING like the picture B) it was tiny C) it was incredibly over priced for what they delivered and D) it was essentially a $.99 Cheeseburger Deluxe with an extra (small) patty and slice of cheese. I could have purchased THREE $.99 Cheeseburger Deluxes, made my own Super three-patty The JS and had more food AND saved money.

The W is a cheat.The W stands for Weak. For Wanting. For being Wanked.

Dave Thomas would look at the poster, smile and nod approvingly, then order one and immediately double sack-punch the manager of the restaurant before going back and ordering himself a proper burger. And I think that Wendy’s should either pull it from their menu, drastically revise the design of the burger, or drop the price to $1.79. For $1.79, my expectations would have been roughly half, but I would have felt like I got what I paid for.

Think I’m the only one that’s pissed at Wendy’s for the W? Hardly. Read this hilarious review of the W where this critic was far less kind in his appraisal:

“If the sauce is signature, it is not a graceful Hancock. It is a scrawled letter X signed by an incompetent psychopath who flings their own poop at the television when the theme song to “The Price is Right” comes on. The sauce is so briny and strong with pickles, it tastes like thousand island dressing amped up with mega-ultra-relish. It is also very vinegary which intensifies the brine and is off-putting. Honestly, drinking a douche would rival the tang of the sauce.

This did not help the cadaver-like meat or the drippy cheese or the lettuce which seemed like an afterthought. The only positive note was the red onion which added a nice sweet and spicy bite. However, you would be wise just to buy a red onion and eat it like an apple.”

I was actually filled with enough righteous indignation to write Wendy’s a letter of complaint when I got home last night. More out of a sense of restoring justice for this great wrong they have perpetuated on burger-kind than from anything else. I will go to great lengths on principal. (I once held up a Wal-Mart checkout line for over 5 minutes for what turned out to be a some asparagus mis-marked by a dime.) If I hear anything back, I’ll update this post…

Reply Slavik
12:16 AM on April 27, 2012
Hmmm, interesting. I just now finished up a W meal here at work. While I agree the sauce did taste like thousand island dressing my burger did not look like the one you had. I didnt exactly resemble the one in the advertisement but it came close. It was pretty tasty too. Ill try and take a pic of it next time I have one if you arr interested!

Reply POVoutfitters
12:43 PM on April 27, 2012
Only Sciacca can combine Dave Thomas punching a restaurant manager AND poop flinging in the same post.

Slavik says...
Hmmm, interesting. I just now finished up a W meal here at work. While I agree the sauce did taste like thousand island dressing my burger did not look like the one you had. I didnt exactly resemble the one in the advertisement but it came close. It was pretty tasty too. Ill try and take a pic of it next time I have one if you arr interested!


There was no universe where the burger I received could have looked like the ad. Never. Not even with a whole team of ILM and Weta Digital effects guys working on it...

POVoutfitters says...
Only Sciacca can combine Dave Thomas punching a restaurant manager AND poop flinging in the same post.

Reply John Sciacca
1:01 PM on April 27, 2012
Update: After some Twittering and filling out the customer comment form -- twice -- I got TWO phone calls from the local big-big boss that runs bunches of Wendy's in our area. He agreed that my experience was sub-par and he wants to make it right. He has invited me to join him for lunch where he'll make me a proper W. I accepted. Told him I'd take a picture and post the results. Check back on Monday afternoon..... Either way, cool that someone is paying attention and trying to offer a fix.

Reply Jason Alden
4:09 PM on September 18, 2020
Thanks for sharing this article, If you are looking any type of customized packaging boxes with color printing and logo printing as per to the demand.
Cardboard Cigarette Boxes
Blank Cigarette Boxes
Packaging for Bath Bombs