Maintaining the Balance of Power

"In Asian and Chinese philosophy, the concept of yin yang, which is often referred to in the West as 'yin and yang,' literally meaning 'dark and light,' is used to describe how polar opposites or seemingly contrary forces are interconnected and interdependent in the natural world, and how they give rise to each other in turn. Opposites thus only exist in relation to each other.” -- Wikipedia

In any healthy relationship – romantic, platonic, business – there needs to be balance between the two parties involved. If one side holds all the cards – the “power” – then the relationship will generally will be filled with problems and resentment and likely won’t last…or end well. (Picture something just short of Obi-Wan and Anakin in the lava fields of Mustafar...except (sadly) without the lightsabers and (hopefully) less amputation and burning.)

This balance of power exists -- and must exist-- between client and installer. And is much like the system of checks and balances that exists in government where no one branch can become too powerful. During the course of the relationship, the balance can shift subtly from one side to the other, but, as with any relationship, for it to continue successfully for a duration of time, the status quo must be kept relatively even.

Before a relationship between installer and client is established -- at the initial meeting, for instance – this balance is virtually equal in its distribution.

The client's power at this point is that he can walk away and choose to do business with someone else. Market factors like other installers and lower pricing on the Internet and the ability to do research help to keep the client to maintain his position of balance in the power scheme.

The installer's power is his knowledge, the product lines that he carries and his reputation in the market place.

If the two parties can’t come to an agreement at this point, either has the ability to just walk away with no repercussions. 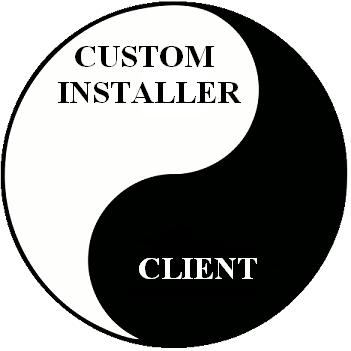 And should they come to an agreement to work together, different -- but equally powerful -- motivations bond them together, maintaining the proper power balance.

For the client, they want to have the work done. The TV mounted, the remote programmed, the housewide audio system installed, the new surround system, whatever. They want this work and want it to be done professionally and correctly.

For the installer, they needs to sell and install items to stay in business. They are also motivated to complete the work and do a good job in order to get paid and further build their reputation and have another satisfied client that will hopefully give referrals.

However, at some point early on, maintaining balance in the relationship requires that money change hands. The client MUST give the installer some money BEFORE any work is performed or the delicate power balance is compromised. (Granted, a disreputable installer at this point *could* take the money and run, leaving the client with no gear or money. Their “power” at that point would be legal recourse and the loss of reputation, but we are going to assume that we are dealing with an installer that is above board that wants to continue doing business.)

Because once the gear is installed, if a balance of payment is due, the balance of power swings *entirely* to the client. And the larger the balance, the more tipped the scales are in the client’s favor. At this point, the client is solely in control as to whether they will or will not pay, leaving the installer in a powerless position.

I have been in this position. And I can tell you, it most definitely *sucks*. And when you let this happen, there are several ways in which the client leverages their power. They will…

Pay with a service call...

They say that something isn’t working any more or that they don’t understand the system or that they just need another tutorial and if you’ll only schedule an additional service call to come out and go over everything, then they will pay. This is by far the most common situation, and, fortunately pretty easily handled. However, it is more time out of the schedule and almost always unbillable. This objection is often raised after you wait too long to send an invoice. Read item #3 here for why you should “bill during the honeymoon.”

Pay when you change something...

Similar to the first item, the client chooses the moment when it is time to pay to raise some objection. “I thought our system was going to do this…” “I was under the impression that we were going to have this…” This is a terrific lesson for why you MUST give written (well, preferably typed) estimates and proposals detailing the work to be done. Here is a life-lesson in why given a written proposal helps to avoid a I said/you said confrontation. A confrontation that will not result in you “winning.”

Pay when you add something/do some more work…

We just went through this. We scheduled to install a TV and Blu-ray for a client, a job that we shoe-horned in to an already overly crowded schedule. While at the house, my installers mentioned some additional work he might want to consider having done. Six weeks – and three mailed invoices – later, the client said he will pay…as soon as we do the additional work my installer mentioned. He know considered the job incomplete and didn’t feel he should pay until we were done, even though the original scope of work was just to mount a TV and connect a Blu-ray player. For the client, this $4000 owed was his position of power to muscle himself into our schedule to get more work done.

Pay a portion of the bill…

This is pretty damning, but if you’ve been in business for any length of time, then you’ve likely experienced it. You do the work. You install everything the client asked for and the system is working as it should be. You present the bill. And then the client arbitrarily decides to pay you less than what you agreed on. Often they come up with some line of (BS) reasoning why they feel they should pay less, but ultimately, they just aren’t going to pay the whole bill and usually the installer makes some concessions to get the bulk of the money, cuts their losses and moves on. Here’s my real-life experience with that issue.

Then you have the total nightmare scenario…

"If you don’t do (insert any of the above items or some other random grievance) then you can just come and take it all back!"

Taking back gear is almost never an option. First, the stuff was likely ordered specifically for this project. Second, once it has been unboxed, installed and left in a client’s home, its resale value has dramatically plummeted. Finally, just because the installer takes it back doesn't mean that he is going to be able to return it for any credit. Plus, even if you did get all the gear back AND could sell it for full value, there is likely *hours* of labor and cabling tied up in the job that will be irretrievable. At this point, the installer has the option of either capitulating to the demands, doing more work in the hopes of getting paid, cut the bill to get some pay, or resort to litigation. Here’s a story that is so big and full of awful that I had to write it in two parts a month apart. Part one - We're fired and part two - I'll sue you

Of course, litigation is no Yellow Brick road to payday. It is more like a broken glass and needle strewn path through the ghetto where you're ineveitably wearing the wrong color. Plus, "Fine. I'll see you in court!" is fraught with its own set of problems. It is incredibly stressful, can have significant cost with attorney's fees, adds delays and ties up the schedule, is bad for your reputation AND comes with no guarantee that you will get your money. We have an outstanding judgment in our favor against a non-paying client for like $20,000 that – let’s be honest – we are just never gonna see. The client has since lost the home to the bank and stripped it of all the gear. Plus, “winning” in court cost us about a grand in legal fees. “Yay for us!” said no one in our company.

On large, complex projects – with a reasonable client -- the installer does retain a bit of leverage in the fact that they can point out that the customer will need to rely on the installer's expertise and support going forward. This can often be a major negotiation stronghold. Will dodging or delaying payment now motivate the installer to jump into his van the next time the client has some system emergency…?

It’s a relationship. Yin and yang.

The answer, of course, is to keep the balance of power in check by insuring that the client pays deposits at regular points throughout the project. And fortunately, with the vast majority of clients, this is a non-issue. Again they *want* to have the work done, and *want* to be able to call you back in the future in case they need any help.

However, as economic times have gotten tougher, the slow and difficult paying customers are becoming more prevalent, and protecting yourself – and maintaining your position of power equality – is crucial to remaining in business.

Reply DW
11:35 PM on June 25, 2012
Why is it that the word "litigation" appears so often in your blog posts? Is it that you simply have some sort of weird lexicographic attraction to the word? Or is it more the fact that it's a word that is a mandatory part of your daily lexicon? I find it very interesting that your lawyer's blog mentions you as his most favorite client of all time...