The Next Way Apple Can Rule the World

“Everything around you that you call life, was made up by people that were no smarter than you. And you can change it, you can influence it, you can build your own things that other people can use.” – Steve Jobs

“I finally cracked it.” – Steve Jobs

Apple has made some pretty big moves lately.

First, the iPhone5 launched a few weeks ago, shattering iPhone4S sales numbers by selling a million more units (5 MM 5’s compared to 4 MM 4S’s) over the launch weekend. All eyes are now turning to the anticipated imminent announcement of the latest member of the iOS family, an “iPad Mini.” (A product I previously felt was useless, but now – after living with an iPhone5 for two weeks and an iPad2 for 18+ months – feel there is room for in the line-up. The iPhone5’s screen is not quite big enough and the iPad not quite portable enough. An iPad Mini could fit that Goldilocks’ “just right” wheelhouse right in the middle.)

And many people are still been hyping and claiming that Apple’s “next big thing” will be an Apple TV. (I don't believe this. In fact, I've already written 10 reasons why I'm not betting on an Apple TV, so I won't rehash them here.)

In fact, I don’t feel that a phone or another incarnation of the iPad or any other current “iDevice” will be truly be Apple’s next BIG thing.

No. Instead I’d like to offer an alternative postulation for the next BIG product from the largest company in the world. One that I think they could reinvent, own the market for and use to expose an entirely new demographic to the Apple “it just works” culture.

First, Apple does nothing small. They do things on the million or – in the case of iTunes – BILLION units scale. They are never going to be able to sell that many TVs. The market is too established, and even the coolest TV in the history of TVs – with a corresponding Apple price point – is only going to be able to sell *so* many sets. And people don’t view televisions with the annual ditch-and-upgrade mentality of phone, tablets and computers meaning the vast majority of TV owners won’t abandon a relatively new HD set just to purchase an Apple branded one.

No, the place where Apple can dominate the market will be an entirely new product category for them. (Yes, I realize that TV also fits this bill.) Just as they reimagined music players, music delivery, phones, and tablets, Apple could branch out and take over energy management. Specifically, lighting controls – dimmers and switches – and HVAC (thermostat) control. 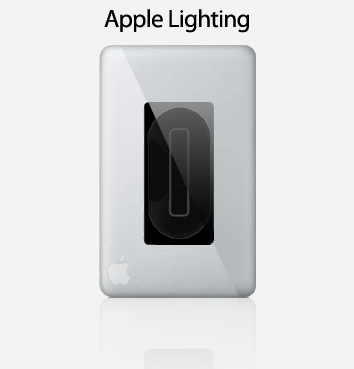 Now, you might not think that a dimmer is sexy enough for Apple to be interested. But you know what else didn’t use to be sexy? Computers. Or music players. Or phones. But Apple has made a pretty fair penny focusing on those products.

Further proof that there is room in this market and that these products can be sexy is the Nest. An ex-Apple employee creates a slickly redesigned thermostat – Nest – last year and the industry went gaga. All of the trade and tech pubs gushed over how amazing this was and how it reinvented an entire category, actually getting people excited about a device they only previously considered when it was too hot or cold. Now imagine if Nest had *actually* been an Apple thermostat. With all the power, branding, support, design and integration behind it?

But ultimately, you know what IS sexy to Apple? Profits and market leading.

Look at the potential market; hundreds of millions of existing homes, each with dozens of light switches and one or more thermostats. The vast majority of which are outfitted with technology that hasn’t changed much since the ‘50s. All of which are ripe to be retrofitted and upgraded with cool new tech. That is a *massive* potential for explosive growth. (Ex CEDIA Chairman, Utz Baldwin, thinks so too, as his new company, Ube, is looking to play in this same arena.)

And lest you think Apple wouldn’t want to get bogged down making something as pedestrian as a light switch, the thing is, Apple wouldn’t even have to MAKE the physical products; they could just license and supply the tech, much like with AirPlay. Let companies like Leviton, Lutron, Pass and Seymour, Honeywell, Carrier, Trane, etc. build the hardwire – just as audio receiver manufacturers do – and Apple can sit back and do what Apple does best; collect giant royalties and work on designing and perfecting an app that would be sexy as hell.

The dimmers and thermostats are only a very small part of the story, as I think the key component will be something along the lines of AirPlay. Now, I freely admit that I don't know exactly how Apple’s AirPlay – the crazy-cool technology that allows you to wireless transmit audio and (with certain devices) video from an iPhone/Touch/Pad or Mac to enabled components – works, but it requires some kind of chip that “lives” in the receiving object. And, if we know nothing else about chips, it's that they rapidly get smaller, more powerful, AND cheaper with time and adoption rates. And now that Apple is the largest company in the world, they can probably negotiate some pretty sick rates at the Foxconn negotiating table. Especially when you are talking about orders potentially in the hundreds of millions of units.

Now let's think bigger than AirPlay’s audio and video and graduate to something bigger I’ll call AirLife. With a new AirLife management app that would automatically discover, name and configure multiple lighting and HVAC and other energy mgmt products around the home and then control multiples of them by easily creating scenes within the app.

So, imagine that Apple does get into the automation and control market, and then throwd the whole weight of its design, marketing and integration resources behind it. You think consumers would purchase Apple tech enabled lighting dimmers or HVAC controllers with a small price premium? Think that Apple would maybe sell a few million (or more) nation/worldwide with the promise of simplified Apple, automated, integrated energy management from customer’s already existing iPads, iPhones, iTouch and Macs? With the ability to easily log in and view/monitor/manage these devices from anywhere in the world?

I’ve gone to this well before, but there is a quote I heard from Russound’s CEO, Charlie Porritt, at dinner last year. Porritt said that while Russound was meeting with Apple to implement AirPlay into a new media streamer, an Apple exec held up a key component and said, “This part costs $15 (at manufacture) right now. What would you do if it was $1? How would that change what you made? How would that change what you do?” This Apple mind-think is what leads them to constantly dominate new categories they choose to enter. Why couldn’t lighting and automation be the next?

Then think a little bigger as AirLife becomes fully integrated into the iOS ecosystem. With embedded control and scheduling via Siri – “OK, John. I’ll remember to turn the lights off when you go to bed” – synched with your Calendar and tied into your “location,” you would have a system that is truly smart and knows *exactly* when you’re home and that could reliably and accurately adjust settings. Or know what the weather is and what it will be to proactively make changes. Or even automatically turn devices off when you leave or before you enter a room.

With the iPhone, iTouch and iPad, Apple put the control system in place. With AirPlay, Apple demonstrated how easy it is to control your music library from the palm of your hands. By thinking outside their normal box, the next small step for Apple might just be a giant step for Apple-kind. And if Jobs taught us anything about Apple, it’s that they have no box.