“If you could purchase movies over the Internet with precisely the same video and audio quality of a physical Blu-ray Disc or DVD, would you ever purchase a shiny, round disc again? Well guess what? This is now a reality.” – Kaleidescape

My first brush with Kaleidescape’s innovative disc-based movie server was back in 2002. I was one of the first reviewers to be sent the product for review, and I can recall standing on my front lawn, talking on my cell phone with company co-founder, Cheena Srinivasan, going over the system. When describing what Kaleidescape was, Cheena told me his vision for the future of the company. “We want to be more than just a media management company,” he said. “We want to eventually get into content delivery.”

Ten years ago, Srinivasan felt that digital delivery was going to be an important roadmap milestone for Kaleidescape, and starting today that is a reality.

While the goal of digital delivery has been a company dream for a while, the reality of getting the store opened and the studio deals lined-up has taken time to get in place. At CEDIA 2011, the company allowed dealers to glimpse a small kernel of this concept by allowing them to log-in to a rudimentary version of the store and download a Blu-ray quality version of Gray Eagles. (You can read about that here.) The company then teased the download store further at this past CEDIA by giving select individuals a brief, closed-door demo of how the store would look and feel.

And for the past week I have been part of a beta group testing the store; browsing, purchasing, downloading and watching titles. And I have to say, it’s great! In fact, it’s been so easy and convenient to use, that I’ve purchased more movies in this past week than I had this entire year. 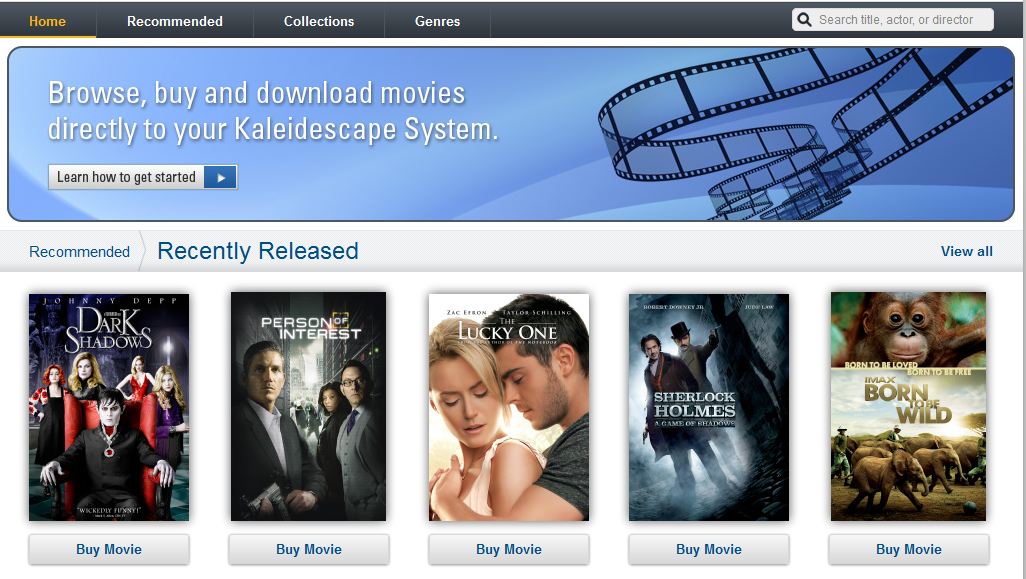 With a mouse-click, titles are purchased and automatically downloaded to my Kaleidescape server, and are then ready for viewing. No more getting in the car to drive down to Redbox with a return date looming over my head. No more waiting for the Netflix or Amazon.com disc to show up in the mail. No more fighting for a parking space at Wal-Mart or Best Buy. Just a click, and it’s mine.

Downloaded titles incorporate all of the Kaleidescape features beloved by system owners including favorite scene bookmarking, Rotten Tomatoes and Common Sense Media info and bypassing all warning and menus. With my Internet connection, DVD titles took between 72 and 112 minutes to download, ranging from 8.5 to 11.8 Mbps. (2001, below, is an outlier as my router crashed in the midst of the download and my Internet was off-line for nearly six hours...) Kaleidescape installed a fiber link between its Sunnyvale facility and its data center to support the Store’s bandwidth, and is capable of supporting customer download speeds over 60 Mbps! 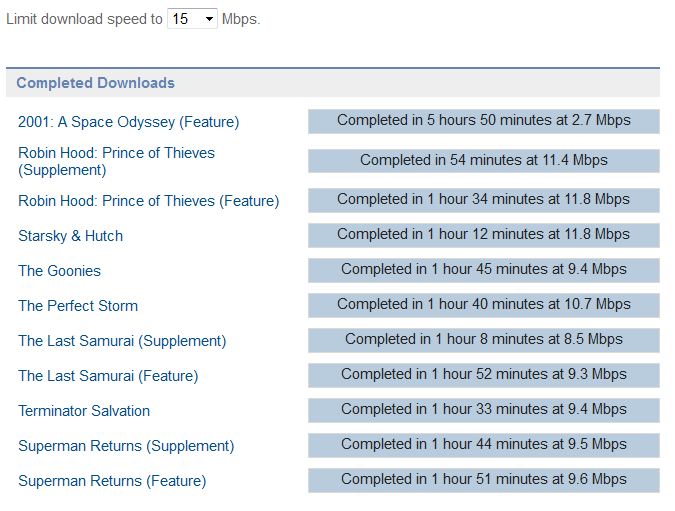 So, what fundamentally separates Kaleidescape’s Store from purchasing a digital download of a movie on iTunes, Amazon or Vudu? Quite a bit actually.

First, Digital Entertainment Group data suggest that while people have embraced electronic delivery methods for rentals and subscriptions, they don’t do so yet when it comes to purchasing and owning content. Where electronics delivery makes up 63% of the subscription and 38% of the one-time rental model, it is only a scant 9% of the purchase market. This certainly points to there being some dissatisfaction with the current system.

One of my biggest objections with download or streaming services like iTunes and Netflix is the quality of the title. When I watch a first-run film, I want it to be in the very best quality possible, and that has meant a physical Blu-ray Disc. But Kaleidescape addresses this by eliminating any differences to the customer between a digital and physical version. Every movie purchased at the Kaleidescape store will be a bit-for-bit identical copy of the original disc. This means that sound and picture quality will be exactly the same – 1080p/24, DTS-HD Master Audio or Dolby TrueHD for Blu-ray quality titles – between the digital and disc versions. Kaleidescape is the only company that is delivering a true, full Blu-ray quality version for download; a real differentiator for discerning videophiles.

Further downloads will also include all of the extras that were found on the physical disc: bonus features, making of documentaries, deleted scenes, alternate endings, commentaries, subtitles and language tracks. If it was on the disc, it will be included with the download.

For content, Kaleidescape has signed a multi-year deal with Warner Bros. Digital Distribution. At launch, there will be approximately 1500 titles available in standard definition (DVD) format. (High definition content will be added to the store beginning in early 2013.) While all existing Kaleidescape players will be able to access and download movies from the Store, an M-Class Kaleidescape player will be required to play back HD content.

Kaleidescape will continue adding titles at the estimated rate of 500 per week until they reach the total Warner Brother’s distribution deal of 3000 feature films and 8500 television episodes. This content will represent 1 in 5 titles – 20% -- of those typically imported by Kaleidescape customers. 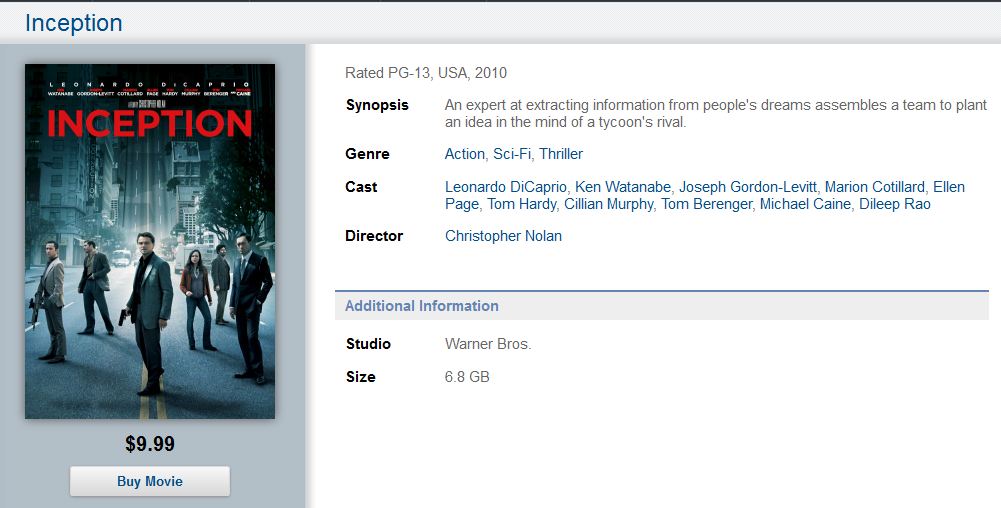 Another key difference of the Kaleidescape Store is the integration of UltraViolet for portable streaming. Any title purchased that is UltraViolet-enabled (roughly two-thirds of the Warner content to date) will be made simultaneously made available for viewing on mobile devices. (UltraViolet features will be enabled by March 2013 and any eligible titles purchased prior to that date will be automatically upgraded for free.)

Michael Malcolm, Founder, Chairman and CEO of Kaleidescape commented, “The inclusion of UltraViolet in our service will give owners of Kaleidescape movie servers a whole new way to enjoy their content.”

Even more exciting is a new upgrade path that will enable Kaleidescape owners to upgrade previously purchased DVD content to Blu-ray quality! Provided that HD UltraViolet rights are available, Kaleidescape owners can upgrade any title in their collection to full, Blu-ray quality for just $8. This will include all extras and bonus content identical to the Blu-ray Disc. I can think of dozens of titles in my own collection where I’d gladly pay $8 to upgrade over buying a $24.95 (or more) Blu-ray Disc.

Another bonus to purchasing titles from the Kaleidescape store is that any purchases will automatically download to up to five different Kaleidescape systems. For owners that have systems installed in multiple houses, this will be an incredible convenience, as it will save them the hassle of having to manually load titles in each location, or purchase five separate Blu-ray copies to keep in disc vaults at each residence. 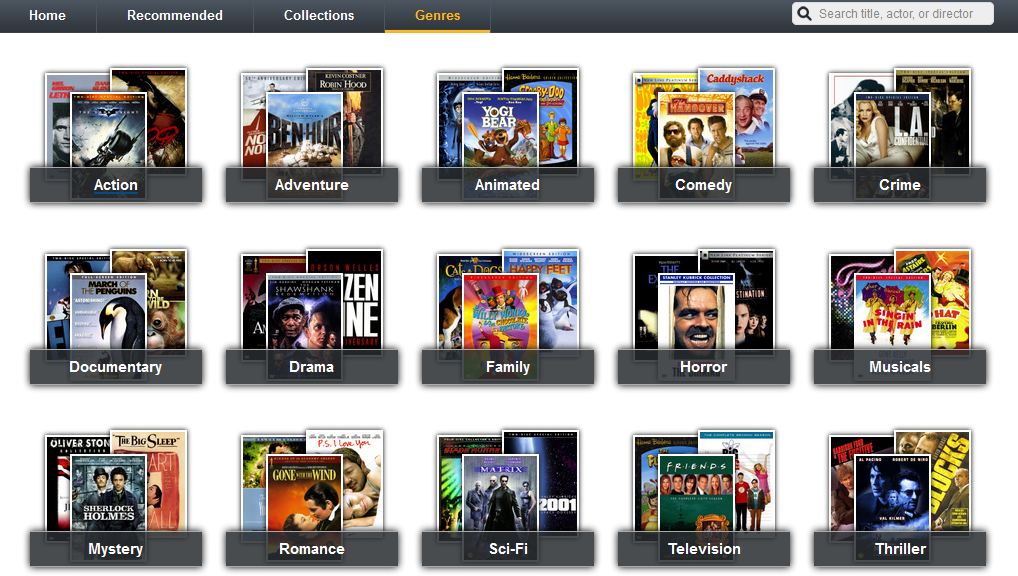 Users browse the store in a manner similar to browsing a collection on their Kaleidescape system, where you can click on an actor or director to see all of the available films, or browse a genre like Sci-Fi or Action or view collections such as Rotten Tomatoes Certified Fresh, Best Picture Academy Award Winners, or All-Time Favorites featuring the top 100 movies on Kaleidescape systems around the world. 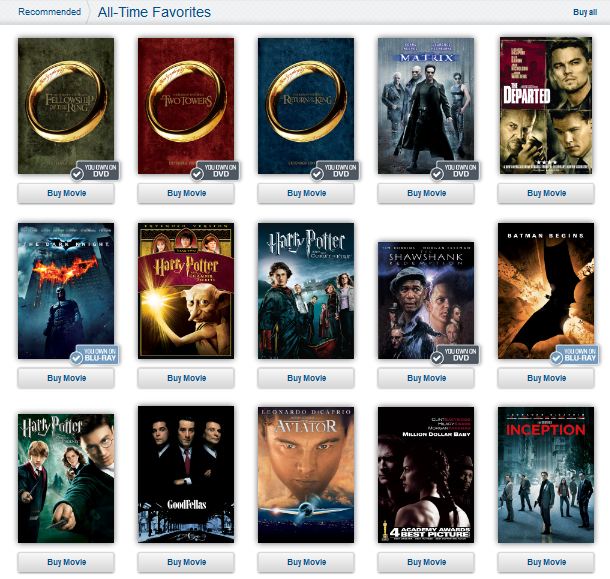 Additionally, since the Store is linked to an owner’s Kaleidescape system, it is aware of all of the movies currently owned by that specific user, and will indicate if the movie is already loaded in DVD or Blu-ray format. For owners of large collections, this will keep them from buying the same title more than once. (I thought this was a ridiculous concern until I bought a second copy of one of the Bond films!) It will also be helpful for quickly and easily completing a collection. Say purchasing all movies directed by Clint Eastwood or most watched Comedies, or to round out your Keira Knightley collection. (Surely I’m not the only one...) 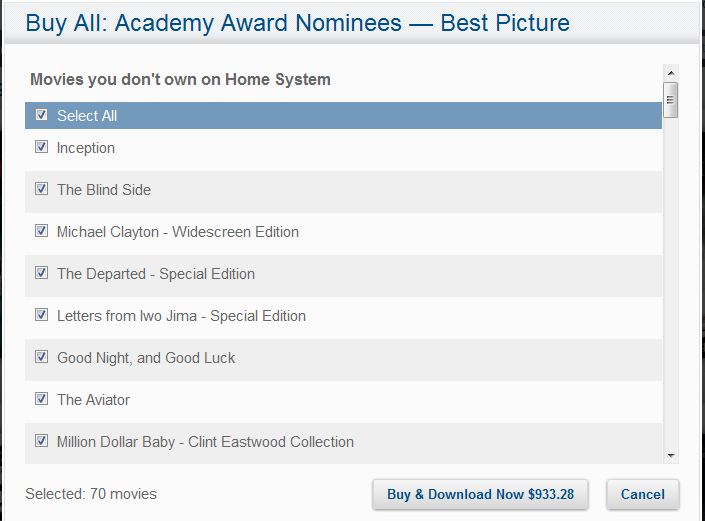 With its Store, Kaleidescape now offers the first way to combine and mange films downloaded with those imported, similar to the way that iTunes combined purchased and pre-owned music collections into one library.

“The potential represented by the Kaleidescape System and the new Kaleidescape Store is, in many respects, similar to the role the iPod played in kick-starting online music purchases,” Malcolm stated.  “We believe that this consolidation is a pre-requisite for mass adoption of electronic movie purchases.  By introducing the Kaleidescape Store in conjunction with the Warner Bros. deal, we are simplifying how movies are purchased and enjoyed at home.”

To experience the Kaleidescape Store for yourself, visit https://store.kaleidescape. com or click here to see a video of the store in action. To learn more about Kaleidescape, here's my review of the M700 Disc Vault. And to purchase a system, you can find a local dealer at www.kaleidescape.com. Or, you could always e-mail me.

Reply Bob S.
11:40 AM on December 11, 2012
Interesting service, but it's all tied to a proprietary hardware platform, right? When I buy a blu-ray, it'll work on pretty much any blu-ray player (region stuff aside). Legal, blu-ray (or higher) quality digital downloads are still a mess. This is a step in the right direction. The lock-in factor needs to be addressed IMO. Lock-in for rentals is nothing, but purchases is a much bigger deal.

Bob S. says...
Interesting service, but it's all tied to a proprietary hardware platform, right? When I buy a blu-ray, it'll work on pretty much any blu-ray player (region stuff aside). Legal, blu-ray (or higher) quality digital downloads are still a mess. This is a step in the right direction. The lock-in factor needs to be addressed IMO. Lock-in for rentals is nothing, but purchases is a much bigger deal.

That lock-in may in fact be a blessing: Kaleidescape servers run a unique operating system called KEAOS that is specifically designed to stream movies from the server to many zone players (read: TVs) in your home. There is no way that WIN/iOS/Linux servers are going to be as fool-proof and reliable as KEAOS. On top of that, the servers contain their own flavour of RAID that also caters better for movie data; then there is the Kaleidescape Support Team, who are actual engineers based in SF who monitor and maintain ALL Kaleidescape servers in the world, remotely. They even send out advance replacement HDD free of charge, BEFORE a suspected HDD failure has occurred! I really can't think of a better H/W platform to store your movie collection on, and now with the Store, it all becomes too easy...