There’s no question that Amazon is moving a lot of TVs. I mean, they frequently sell them at prices that are at or under wholesale, you can browse through dozens of reviews and find the set with the most “THIS IS THE SET THAT I OWN! SO IT’S THE MOST AWESOME! ANY OTHER SET IS FOR LOSERS AND NEWBS! ANY OTHER COMMENTS ARE FROM SPAMMERS AND HATERS! THIS SET IS THE BEST!!!!” comments by it and then click-to-order. All of this while sipping a beer at 2 in the morning while lying in your underwear amidst the Dorito strewn-filth on your couch. And all without requiring any actual human interaction whatsoever!

The deal killer, of course, comes two days later when the box shows up on your doorstep and then it’s on you to figure out what the hell to do with it. I mean, there’s a TV. And there’s a wall. Some kind of strange magic has to happen to get those two eventualities to successfully meet up.

For years, this has been the role of the customer installer, or, who I like to call "me."

You’d call him/me up, say something like*, “Hi, I was in your store a few times and you gave me several demos of televisions and discussed the different technologies and benefits ad nauseum – your knowledge really is impressively encyclopedic and yet you convey it to the layman in a way that is both understandable and interesting. In fact, my wife was so impressed, I think she has a bit of a crush on your now, and this is a woman whose typical interest in technology involves screaming things like, “If you turn that TV on, as God is my witness, I’m going to kill someone in their sleep!” Anyhow, I took all of that knowledge that you gave me for free and went and bought a TV on the Internet. That’s cool, right? I mean, I know you had all those sets in your showroom, but I figured you were really more like a knowledge library where people just come in an freely get information, not like you actually wanted to sell stuff. Well, whatever. So, I bought that TV that you recommended and not it’s hear and I’d love you to come out and install it for me. I *guess* this is something that I have to pay you for, which I *guess* is OK, what with me basically raping your for your professional expertise and all. So, how is tomorrow morning?”

(*However you say it, this is pretty much how I hear it.)

Apparently not merely content to try and drive me out of business by rendering TV sales less profitable than setting more on fire (when I burn money, I only lose that amount; when I buy a TV, I often lose extra-special-good because of the shipping charges too!), Amazon now wants to replace me, the person! Just when I thought I was maybe becoming superfluous, Amazon's new On-Wall TV Installation Program attempts to remove any doubt!

And while no one puts Baby in a corner, Amazon is now selling installers-in-a-box. 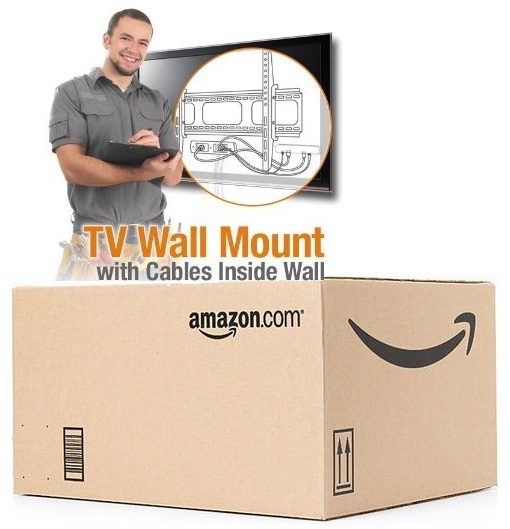 (Figuratively. I assume, as the cost of shipping an installer across the country would likely be cost prohibitive and messy, and then if you didn’t cut enough air-holes or leave enough water...)

Starting as a beta test in Seattle and King County areas of Washington, you can now click-to-order a real-life installer to install your real-life TV! Three are two options; cables running up the outside of your wall in conduit like you hired Cletus the slack-jawed-yokel for $275, or wiring concealed professionally inside the wall like any installer with a pinch of self-dignity would do for $339.

Here’s what Amazon promises (box with a smile not included):

The service provider will securely mount your flat screen television on your wall. Televisions can be mounted to standard drywall only. The tilting mounting bracket is included in the service price.

Technicians also install a power outlet behind the television and route A/V cables behind your wall for cleanest appearance. One in-wall rated HDMI cable is included. Please note that 1) cables cannot be run behind brick or concrete surfaces and 2) an outlet must already exist directly below the spot where the TV will be mounted.

So, standard drywall only, which I’m assuming means either ½ or 5/8-inch variety. Doesn’t say anything about only mounting to wooden studs, so I’m guessing they will also “securely mount your flat screen” to steel construction? Or maybe they won’t… Since an outlet “must already exist directly below the spot where the TV will be mounted” this is pretty much going to exclude any mounting over a fireplace, a very common installation option.

So, here’s what’ included with you Installer-in-a-Box: 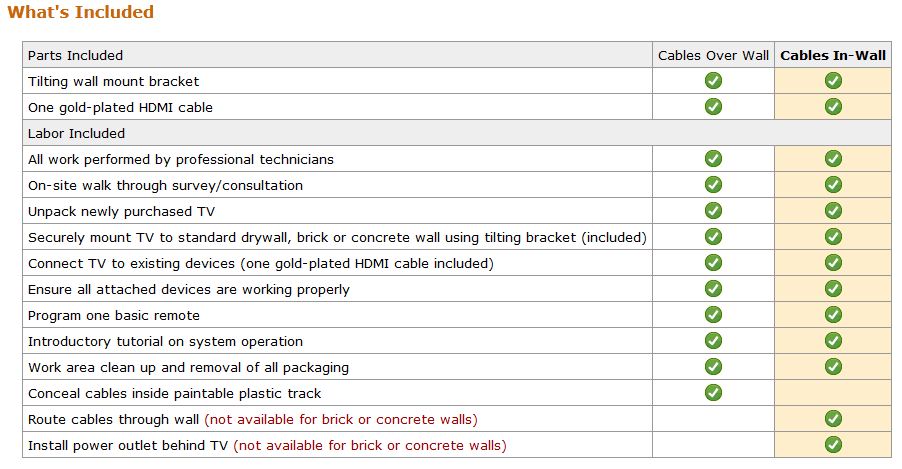 A tilting wall mount bracket you say. But I really wanted an ultra-thin flat one, because I want my TV ultra-ultra close to the wall. Can I get that instead? And, Ooo! An actual gold-plated HDMI cable! How fancy! But how long is it? You see, my gear is in a closet in another room. The contract didn’t say anything about how far the gear could be located away from the TV, just that I need an electrical outlet below the TV spot. It also says “connect TV to existing devices” – that’s deviSAYS, as in plural as in more than one devi-SAH. But there’s only one HDMI cable. How will all of my SAYS devices connect? Oh, and my old VCR uses composite cabling and my Wii uses Component video. So, I’m gonna need you to run those too. And how much will that cost? And remember, they’re all in that closet in another room. Program a “basic remote.” What’s a “basic remote” and program it to do what? Program it to turn the TV on and off or program it to handle all the modes and functions of all the other devices?  “Route cables through wall (not available for brick or concrete walls).” OK, that’s straight forward. What about my wall that is poured foam insulation? Is that included? Or my other wall that has purlins like every three feet? Your guy can get through those for me no problem?

This is why these “install in a box” services will never work, and why custom will always be custom.

You want to put your electronics in a closet on the other side of the house? Fine! I’ve got an HDBaseT balun that will send uncompressed HDMI audio and video up to 100 meters over a single, inexpensive Cat5. We can handle composite and component the same way, if you like, or we could just recommend a good A/V receiver that will transcode all the video for you over that single HDMI wire. We’ll also suggest and program and ADVANCED remote that will control ALL of your gear with a minimum of button presses and use radio frequency so you don’t even have to point it. If you want to be even more fancy, we’ll tell you about Control4 and how you can easily add lighting and HVAC and security and other automation to your system! My guys knows the products intimately and can suggest things you’ve probably never even imagined. Of course, unlike a guy-in-a-box, I’m going to send someone out AHEAD OF TIME to see exactly what the scope of the job is so there won’t be any surprises come install day.

And the thing is, hiring a great local pro probably won't cost you much more than $339 for a basic, in-wall cable retro and TV install. Plus, you'll know that you got everything you needed, probably get a good idea of things you could upgrade and won't be just another contract job where the guy wanted to get in-and-out as quickly as possible.

Need some other reasons why you might not want a random installer showing up at your house? Well, here’s four… 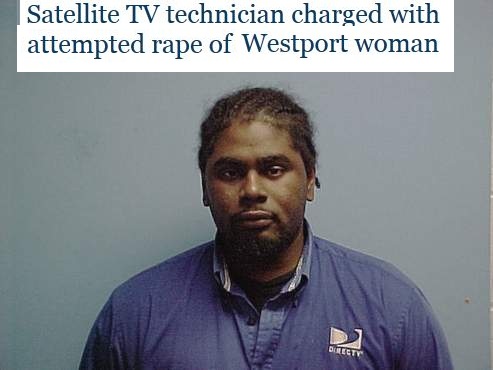 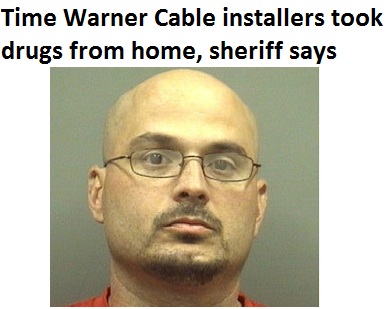 I know they said, "Go aheah and use our bathroom," but I'm *pretty sure* the "and take all of the percocet and OxyContin you need!" was only in your mind! 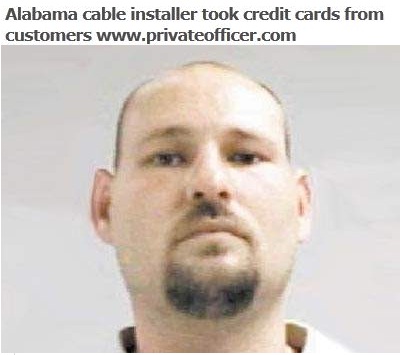 OK, I get that they were just *lying there* on the dresser, but this is breaking the code of trust, man! Code...of...TRUST! 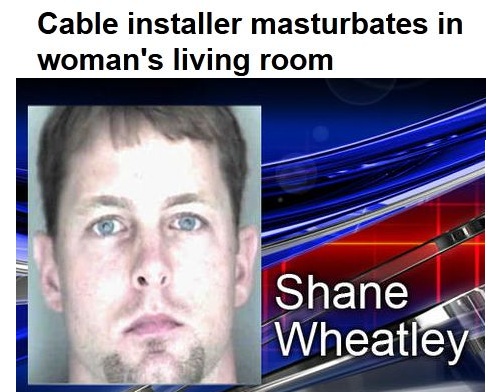 (Thanks to Heather Sidorowicz -- @Tech_Chi -- for the heads-up on Amazon's Install Program!)