As I wrote in Part One of this piece, I've been a custom installer for the past 15 years, and in that time I see people making the same home theater design mistakes over and over. And over.

And these are real-world systems costing between $10,000 to $50,000 where you can get an amazing home theater experience, but there are just some fundamental design issues that keep these systems from truly being all they can be. Fortunately, many of these issues are easily -- and cheaply -- fixed even after the installation.

In Part One (again, the link in case you missed it) I mentioned these five common design issues:

Trying to do too much in the space

Cramming in too many seats

Chintzing out on screen size

Not enough bass for the space

Here are the other five mistakes I encounter most often...

One of the things you should never greeat wrong in your theater is the speaker layout. First, it is absolutely critical to proper performance. Second, it isn’t rocket science. In fact, there are numerous accepted diagrams on proper speaker placement from Dolby, DTS, Audyssey, and THX, and while there might be minor disagreements on exactly where this surround speaker should go versus that one, the general rules are straight-forward and simple to follow. Here' is a chart featuring Dolby’s recommend 7.1-channel layout: 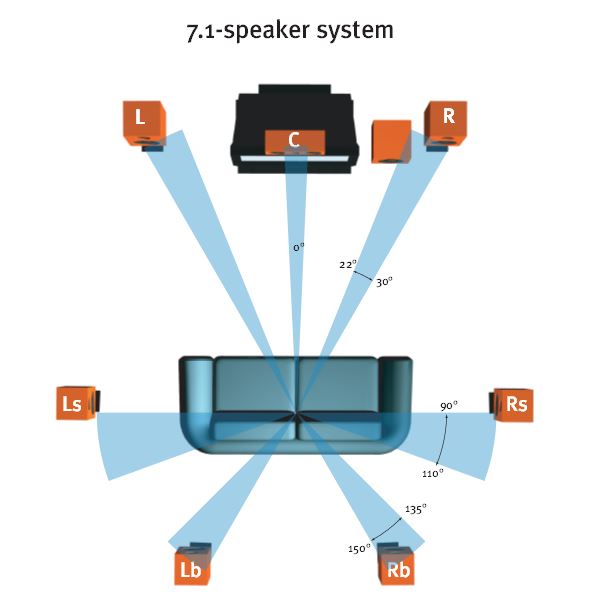 However, I can’t tell you how frequently I go into rooms that are just completely wrong. Center channels not centered on the screen. Surround channels ahead of the listening position. A lot of people have a real aversion to seeing any speakers, and feel they should be hidden away, which is just a ludicrous idea in a dedicated room.

First, if you’ve got a big-ass screen up on the wall, a few speakers aren’t going to somehow “ruin” the look of your room. Second, in many spaces with a large front wall, having some speakers around the screen can help to balance the wall and keep it from feeling empty. Finally, people are coming to this room to watch a movie, so they' are expecting there to be some supporting equipment to go along with it. Honestly, I don’t care much where you put the speakers as long as they' are in the correct location and not compromised in some way. If you don’t want to see them, they can go behind an acoustically transparent screen, which is how they do it at the commercial cinema.

A lot of times people will put the speakers in the ceiling to keep them from being visible. Now, I’m not totally averse to the surround channels being in the ceiling. For a lot of the effects that these speakers play – rain, wind, crowd noise, planes flying by — the sounds emanating from the ceiling are cohesive to what is happening on screen. But, I am against putting the front channels in the ceiling. A speaker is kind of like a flashlight but with sound, and if you point the sound straight down, you' are not going to hear it the way it was intended. This is going to greatly affect the dialogue intelligibility and make voices seem disjointed from the on-screen action. Now, several manufacturers do make front left/center/right speakers that are specifically designed for ceiling use, and if you absolutely have to go in the ceiling, this is the only acceptable way of doing it. Here is a pic of Definitive Technology's UIW RCS II. Not the angled baffle and the way the drivers would point towards the listening position even when installed in the ceiling: 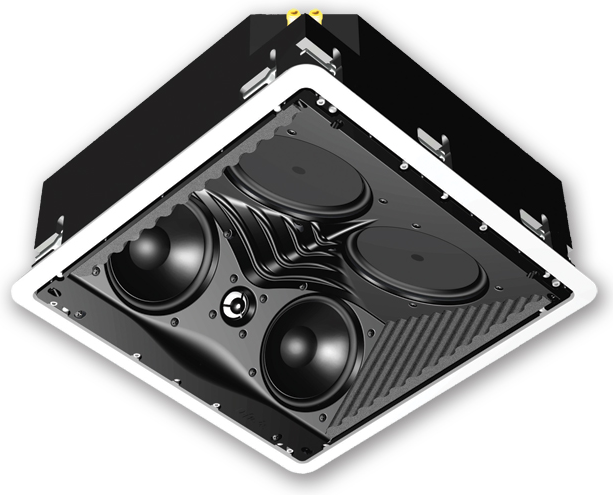 So, again, if you have to go in the ceiling, this is the only acceptable way to do it. Even still, I’m not gonna love it.

Click here to read the final four design mistakes you should avoid in your home theater...