How many custom installers does it take to change a light bulb?

Answer: “Just one. But it takes several hours to first research the bulb type and load, compare it to the list of approved bulbs, replace and reprogram the new dimmer and then change the bulb.”

That joke would be funny if it wasn’t so painfully true. Because if you’ve been in this business for any amount of time and you’ve ever installed a lighting control system then you have received or will receive the call. It’s the one where the client says he just returned from to the store and bought a bunch of the new compact fluorescent or LED bulbs that’s he’s been reading so much about and installed them into his system and now all those dimmers you sold him don’t work and what time are you going to show up tomorrow to fix it?

Remember when the hardest thing about installing a light bulb was getting out the ladder or maybe having to use that claw-thingy? Or deciding whether you wanted the soft, gentle, warming glow of a mother’s 50-watt caress versus the harsh, Guantanamo interrogation reality experience courtesy of an entire room of 100-watters?

Now selecting a bulb is a daunting case of “will it or won’t it work?” Incandescent, halogen, compact fluorescent, magnetic low voltage, LED, electronic low voltage, metal halide… Then you have to decide what kind of light you want which often requires advanced cross-wattage mathematics calculations along with Kelvin color temperature charts and pictures of the sun at different times of the day.

But more than that, a light bulb choice has also become a kind of moral decision, where the bulbs you buy show indicate you view the world around you. Is it your own hedonistic playground, where you go out of your way to pour used oil down drains and shoot CFC’s straight into Mother Earth’s face or do you strum a lute while treading ever so light and gentle, recycling everything better than how you found it? 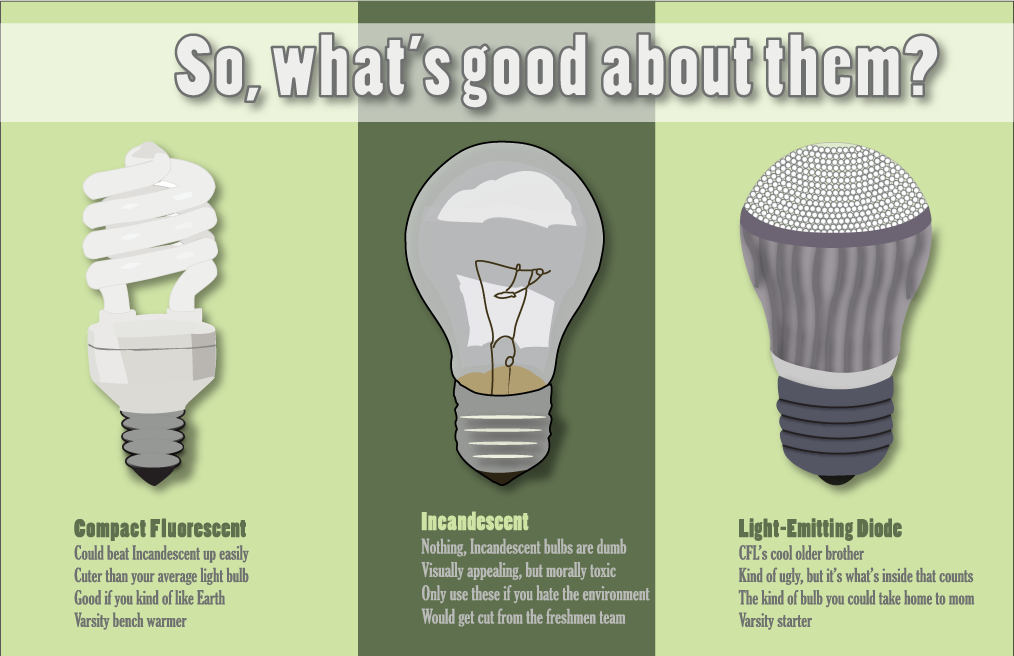 Several months ago, my local energy concern had some kind of promotion where if you walked into their store they would just give you a box of dozen compact fluorescent bulbs. Was it there way of saying, “We’re lonely! Come in for a chat!” or more of a subtle, “We realize we’ve been gouging you all these years, and now we want to complete the cycle by introducing mercury-filled ticking timebombs into your home!” But if there is anything the elder John Sciacca taught me, it’s that one does not turn away from the hand offering free bounty. So I walked into the local branch and picked up my box, which I verily took home and installed in my daughter’s room because she is the one most often to leave lights on all the time. I figured that with the gobs of money I’d be saving on my energy bill, I could possibly venture off the Taco Bell value menu for a change. (Damn, I love you Cool Ranch Doritos Locos! Let’s never fight!) Except, the lights were so slow to turn on you could actually watch the electrons bouncing around and getting excited and the bulbs emitted a sickly yellow color making my entire family look like we had suddenly contracted a rather acute stage of jaundice, which I’m fairly certain we hadn’t. When I finished changing all the bulbs my daughter said, “No, daddy! No!” And the capper? The lights made a weird, “Hey! Who’s up for a seizure?” flicker with my Lutron RadioRA2 dimmers. Goodbye, CFL lights! I’d throw you away but I fear I’d be violating some hazardous materials disposal law or Geneva treaty.

Please continue reading about the problem of modern day light bulbs and one very possible solution that I've discovered!

Reply The Tim Channel
3:56 PM on July 17, 2013
The mercury fears are overblown on fluorescents. It pales in comparison to the amount of mercury coming out of coal fired electric plants. Also, I would be dead already if it was as toxic as everybody makes out. In the "old days" when kids could be kids, there was nothing more fun than running into a dumpster of old florescent tubes to smash. I'm not suggesting it's good idea to do so. You bring up some points on lighting and home automation. You definitely need degrees in half a dozen lighting and automation programming languages to make a go of it these days.

Reply Albina
1:47 AM on February 23, 2018
Wow i can say that this is another great article as expected of this blog.Bookmarked this site..
view it now

Reply Albina
3:22 AM on February 23, 2018
Thanks for sharing the post.. parents are worlds best person in each lives of individual..they need or must succeed to sustain needs of the family.
buy comments facebook page