My parents are about as middle-of-the-road-America as you can get when it comes to technology. Actually, the middle-of-the-road is probably more high-tech than my parents. Growing up, I might as well have lived in an Amish village for all of the technology that they supplied. We never owned a record player or a stereo. The only commentary I ever received about music as a child was a stern, "Turn it down!" and the equally popular "Don't raise it above 4!"  In fact, my parents JUST upgraded to a 37-inch flat panel about 6 months ago. Before that they were using a 27-inch tube that they inherited from my uncle Max. (The 27-incher was a welcome upgrade over the 20-inch they HAD been using for so many years I like to think of it as a slightly younger brother. Seriously, just TRY and watch the Super Bowl on a 20-inch TV. And I double-dare you to watch ANYTHING letterboxed on a set that size. The actual film image ends up being about 5-inches tall, or just slightly bigger than if you were to watch something at the neighbor's house across the street...through the windows using binoculars!) My mom rented VHS tapes right up until Blockbuster said "Enough!" and purchased a special option stereo on her Mercedes that allowed her to play cassettes. As in tapes. Surround sound? Phooey! And Blu-ray, schmoo-ray.

In a way, though, my parents are probably a lot like YOUR parents and millions of other people out there who don't care about tech but just want to watch a movie. We take all of this technology for granted and keep up with the changes. But one thing that is confounding everyone is 3D. Nearly every day people find my site by Googling things like "How do I make 3D work?" "Will my current TV show 3D?" or "Please, dear God, help me figure out 3D before I kill someone!" (I'm waiting for that Google search that says "I've gone blind watching 3D. What now?")

So, when I talked to my dad last night, he asked me if I had seen Avatar and if the version I saw was in 3D. I said that yes, I had seen it in the theater and that it was in 3D. He then said that the version he rented didn't work in 3D and did he get the wrong one or was he missing something?

This to me just exemplifies the MASSIVE consumer confusion about 3D TV. First, the industry has hyped the technology as if it is the very second coming itself. Actually, strike that. I doubt that the Messiah would have the PR support behind him of every Japanese and Korean TV manufacturer. Then, you release these new 3D sets right on the heels of the largest movie EVER -- which happens to be in 3D. Then you release that movie on DVD and Blu-ray....NOT in 3D! Perfect storm of confusion complete! 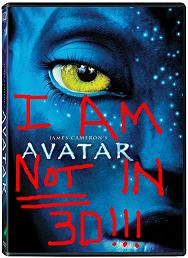 I think that a good many people out there are under the impression that when they rent/buy Avatar they are getting the theatrical 3D experience. ("I don't see what all the fuss is about. Them 3Ds don't like much different than my regular shows.") I'm really kind of surprised that there isn't a sticker/disclaimer on the Avatar disc box that proclaims that it is NOT in 3D. But, of course, that would mean not selling as many discs, so I guess I'm not really *that* surprised after all. (And, oh, please, will someone start a Website that has a transcript of a Wal-Mart employee trying to explain 3D to a customer returning a movie? Seriously. I will PAY you for the info.)

For the record, if you watch Avatar at home NOW, it will NOT be in 3D. When the movie is released NEXT YEAR on 3D you will need to have a 3D capable Blu-ray disc player, a 3D capable TV and 3D glasses to get the full Avatar in 3D experience. So, dad, you should plan on watching Avatar in 3D around the time you buy your next TV; probablysometime around 2035.

If you or any of your friends or parents want to know more about 3D, this post is a good place to start. If, on the other hand, you'd like to know how the senior Sciaccas live in technological obscurity, I'll be happy to direct queries their way.

Reply Gary Mardell
7:00 PM on May 11, 2010
Oh yeah, kind of reminds me of conversations I've had with my Dad: Surround sound? But Dad, you're deaf in one ear. HDTV? But Dad, you're addicted to QVC, and you'll need a new TV and a Blu-Ray player and satellite and Blu-Ray discs and all your fav films are 100 years old (imagine look of total disdain on my mother's face for Dad's desire for boys toys at this point). So far I have managed to avoid the 3D conversation... Frankly, i gave up after the 'how to attach a file to an email' conversation which had the traditional 'my computer doesn't work' parentheses. Love him to bits. And the sad thing? That's me in 30 years time. My friends have instructions to unload both barrels (silenced, or otherwise) should that be the case.

Reply John Sciacca
8:04 PM on May 11, 2010
Gary, I'm still "hip" enough that my daughter asks ME to turn it down. Though, maybe that's not hip-ness but deafness and she is only 3. At least she'll never look back and wonder why we never had any music in the house.

Reply Gary Mardell
8:36 PM on May 11, 2010
There's a down control on an amp? Who'd have known... She'll thank you for it... eventually, I had Sinatra, the Rat Pack, Elvis and the Beatles to grow up on. They were a bit taken aback when I brought home The Sex Pistols but, hey, each to his own. I'm not sure that they'd quite get their heads around Lily Allen, Pink, and Lady Gaga though. Mind you, I reckon my Mum would have a go !

Reply HTI Guy
9:20 PM on May 13, 2010
Not that my dad is on the bleeding-edge of technology now, but I attribute my original interest in music and stereo to him in the early years, the mid 1960s where the term Hi-Fi was abound. He mail ordered his first hifi system which consisted of a bunch of walnut panels, wires and parts and he had to solder it all together. And, it was tube-based technology which sounded really smooth but they got hotter than shit and attracted lots of dust. He still has his ELAC turntable made in then, West Germany which had automatic push buttons for startup and disc size and speed. He even got me started on reel-to-reel which before the cassette came out was, the shit. Yes, I still have my Akai GX4000D 7.5 inch deck. I also still have my circa 1982 Pioneer PL-7 turntable, one of the first with a direct drive dc motor in lieu of belts, with a graphite tonearm and an Ortofon cartridge........geeezuz crust as my dad would say, I am ramblin.

Reply HTI Guy
9:22 PM on May 13, 2010
The only thing worse than 3D content would be to have actuators with nozzles in the theater seating that "emitted" the actual smells appropriate to the current scenery.......but then they would have to issue airsick bags at the concession stand along with the $4 Reeses Pieces....eh?

Reply john
5:09 PM on May 14, 2010
For the record, I have pictures of you, when your were 3 years old, with about 30 of my prized record albums spread out all over the floor. So I believe this should disspell the "Amish" theory. And it further explains why you have such a wonderful interest in technology.

john says...
For the record, I have pictures of you, when your were 3 years old, with about 30 of my prized record albums spread out all over the floor.


"The day, the music....died....." So, I guess this was the last moment that we had a stereo in the Sciacca house. Also, I didn't say we didn't have any RECORDS; just nothing to actually PLAY them on...