Put my thumb in a hurt locker

The other night at my parent’s house, I told Lauryn that she was getting so big and that I was sad because she wasn’t my little, baby Lauryn anymore. And she looked at me with big eyes and shook her head and said, “It’s OK, daddy. I’ll always be your little baby Lauryn.”

Then minutes later she broke my heart by saying those 3 words no parent ever wants to hear: “I…hate…chocolate.”

I don’t understand where I went wrong, but clearly I have failed her somewhere as a father. That she uses words like “yucky” and some kind of guttural, Klingon sounding throat noise when describing chocolate does not bode well for any future daddy-daughter hot fudge sundae outings.

So, after dinner – and refusing the chocolate dessert that my mom had – my dad offered to let Lauryn light some fireworks. So we go into the street and my dad lights some sparklers that Lauryn holds and waves and she is really having fun, and of course wants to do more. So after he retrieves some more, my dad holds Lauryn and I go to light a sparkler for her.

Now, a sparkler is the single most benign firework in the history of fireworks. They are the Gandhi of fireworks. Even in California, a state where fireworks are considered more illegal than drugs or firearms, sparklers are tolerated. You just can’t get into any trouble with a sparkler. In fact, the only thing less fireworky than a sparkler would be the punk; that brown incense stick looking thing used to light other fireworks.

So, my dad hands me the pack of matches and I am trying to light Lauryn’s sparkler. And trying and trying, and finally it lights. And immediately shoots a plasma beam of scalding green phosphor into my thumb and index finger. To try and help you visualize the level of pain, imagine that you are standing just a few feet from the 5 exhaust jets of a Saturn V rocket. And then, just when it has reached maximum,  earth's gravitational pull breaking levels of thrust, you casually stick your hand into the flame. And then hold it there for a long three count.

I would say that the pain was mind numbing, except that it was totally the exact opposite of mind numbing. Rather, it was mind *focusing* blocking out every other thought or rational action, just creating an express, laser beam route straight from the throbulating, searing pain shooting up from my thumb deep into my brain. This was a Tantric pain-gasm so intense that Sting would have looked on in jealous wonder and perhaps been inspired to write a comeback album and reunite The Police.

After I finished running around, jumping up and down and clutching my charred stump of a thumb, I went into the house to put some ice on it. The second I walked into the kitchen, my mom said, “Pee-yew! What is that awful smell?!” 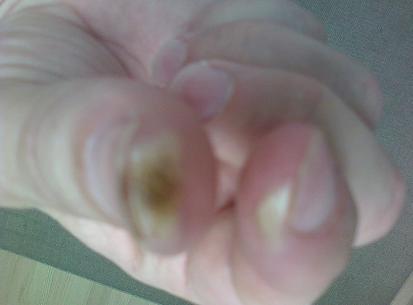 Oh, that? That nutty, roasty, woody kind of meaty, fried hair smell? I don't know....maybe it is the third degree scorched remnants of my THUMB!

Reply [email protected]
11:52 AM on June 9, 2010
So how is it feeling now? When Dad lights the barbarque I will think of you and the nutty roasty woody smell you brought in to the kitchen. Of course you are talking to a person that LOVES the smell of skunk.

Reply [email protected]
12:06 PM on June 9, 2010
Your Dad said :thank Goodness it was not a cherry bomb"
Reply miahrrhea
12:35 PM on June 10, 2010
Never fear John, I've Fed Ex'd a pack of "Heavy flow Play-Tex" tampons today...Overnight...no charge-thats what brother in laws are for. Until then go down to Dollar General and get a bottle of Midol and a pint of ice cream.
My suggestion, dictate and post a discussion with Dana on Childbirth.
During my second tour in Nam, I was shot by the Viet Cong, damn Chinese and their gift of A-K's. The advice my Lieutenant gave me seem applicable here..."Rub a little dirt on it and move on!"

Reply Dan
3:34 PM on June 10, 2010
Your carbon thumbstump side-tracked the more important message of this story.

Lauryn hates chocolate!!!
P.S. Miah. You didn't even mention that when both MY thumbs were blown clean off how I had to pull you into the foxhole by clasping my hands together, right before the napalm hit and burned us pretty good. That said, I'm gonna take another look at John's thumb.


I know.... That was really the most painful part of the story. In fact, it was so off-putting, I actually just burned myself on purpose to change the subject....