Wal-Mart: Killing America with a smile

Generally, talking about where you buy your groceries isn't the kind of conversation topic that is going to produce polarizing opinions. "You shop at Kroger, huh? Hmmm, interesting." But tell someone that you shop at Wal-Mart and you're likely to get an earful of piss and vinegar with phrases like "hate," "destroy," "boycot," and "unholy spawn of Lucifer" bandied about.

Since we live almost exactly 2 miles from a Super Wal-Mart, it has become our grocery of choice due mainly to convenience. The next closest grocery is another mile away and it is SO much more expensive that we have dubbed it the "luxury store." (Though, admittedly, they have a WAY better wine and beer selection, their produce looks like it was handpicked from the very height of Eden and they have an olive bar, something that Wal-Mart will add right after they get around to softening the arc sodium lighting throughout the store.) This store is so expensive, that I took my brother there to pick up some beer and he needed to buy some hair gel, and even though he is pulling down 6-figures, he shuddered to make the purchase of their least expensive hair product. So, we find ourselves going to the Mart about twice a week.

Now, I've been told (and heartily believe) that our store is one of the top 10 Wal-Marts in the country and that it rakes in $1 million a DAY! If you are able to pull down a parking space within 100 yards of the store you feel like you've been granted an audience with the Queen. In the summer time, our Wal-Mart is packed from morning until night.  And I mean PACKED. Like every register with 15+ people in line, and each person is packing those kinds of overflowing shopping carts that makes you wonder if you missed the announcement of the apocalypse coming to town. Dana and I once went there at 2 in the morning -- we couldn't stand the tension of the is she/isn't she pregnant with Lauryn and decided to run out and buy a pregnancy test (she was!) -- and even then, there were a fair number of people milling about the store with that zombie-like, blank eyed, slack jawed expression common to many Wal-Mart patrons.

And while there are MANY things that I don't like about Wal-Mart (OK, here's two. First, don't re-merchandise crap on me. I want to come in and buy a grocery item. Let's not play this "welcome to our Las Vegas casino, now try and find your way out!" game with hiding the staple items. Second, they have replaced a good majority of their cashiers with do it yourself check-out stations. While this is fine IN THEORY, in reality these machines scan groceries just slightly faster than the Georgia Dept. of Transportation and, well, the average IQ of the typical Wal-Mart shopper doesn't seem up to the challenge of swiping a UPC code over a scanner and then putting the item into a bag. I stood behind what looked like an otherwise normal American the other day and watched her waving her item around in the air with all of the conviction of someone who was getting ready to break down and say, "Computer! Make buy groceries now!" So, these machines have really just added about 50% of the time required for checking out), so while I have my gripes with the Mart, I never really considered them evil.

Never until I watched this documentary the other night: 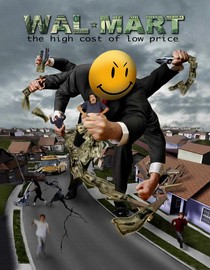 First off, as a critique of the documentary itself, this was not that great. It jumped around, ended really abruptly, the production values were meh, but the message was pretty consistent throughout. Namely Wal-Mart is The Great Satan, and it's only goal is to kill America so it can then move and and attach to a new host. Now, I'm not sure that watching this will keep me from shopping there, or that it is possible for me to *dislike* shopping there any more than I do, but it was really an eye opener in several areas.

Not surprising was the impact that Wal-Mart stores had on small businesses when they came steam rolling into town. What WAS surprising was the giant subsidies that many cities give to Wal-Mart to actually PAY to bring them in. As a small business, I can count on one finger (actually zero fingers) the money that Custom Theater has received over 15 years in business. Also shocking was the average wage than a Wal-Mart employee makes, about $13,000 a year, which is considered below the poverty level. Instead of paying a living wage, Wal-Mart's solution is to encourage employees to seek government assistance like Medicare, WIC, food stamps, etc. This costs the government (OK, this costs us tax payers) like $2 BILLION a year. Also, the year that this was filmed (2005) the CEO made an unbelievable 2000 times his average employee, or $26 Million. The unspoken motto of management was "do more with less." As in, get more done with less employess (like, say, by replacing a (mostly) competent human checker with an I-take-no-breaks-so-don't-expect-me-to-go-fast Ivan Drago-like automaton) or by coercing employees to do work off the clock. For employees, more with less means do more work, and we might give you that 1-3% per year cost of living raise. So, put in those freebie overtime hours, because that $7 you're making this year just might mean a whopping $7.07 next year! You know, if we don't replace you with a machine.

Also, Wal-Mart also tried to suppress an internal study that revealed that 80% of the crimes happening at Wal-Mart happen outside the store in the parking lot. And that the 200 cameras employed in a store are far less helpful than the whopping 4 they install outside and that a single hourly employee in a golf cart would reduce those crimes --- kidnappings, rapes, robberies and murders -- to virtually zero.

Showing that the giving spirit comes from the top, Wal-Mart started an assistance program for employees to help fellow employees in times of need. While the low paid employees donated nearly $6 million, the Walton family -- with a combined worth over $90 BILLION -- donated an uber generous $6 thousand. Yes, six whole thousand. Or, to put it another way, at 5% earnings, they donated a little less than the amount of money they make in 45 SECONDS!

Also, let's not forget what happens when a Wal-Mart decides to pack up and leave. There are millions of square feet of dead, grey spaces throughout the country of these giant, empty husks that Wal-Mart has abandoned like a snake shedding its skin. We had one here; the previous Mart abandoned for the new Super Mart location. This huge space is just now a struggling strip mall of one failed store after another, as these businesses (I think we're on #4) try to fill this giant vacated building.

So, while I might not go out of my way to avoid shopping at Wal-Mart, I probably won't go out of my way to seek it out any more. I'm all for the rich getting richer, but a little less so when I see them sharpening their cleats before they put them on to climb on the backs of those below them.

Reply jeff f
7:17 PM on March 21, 2013
If someone only reads the first two paragraphs and then moves off the page they're left with the impression that's okay to shop at Walmart. And they most likely will because they trust your written word. But then you conclude with "no I'm shopping elsewhere cause Walmart is evil." I almost skipped off your page in disgust thinking you're a moron for shopping there. You're right. They're killing America one store at a time.