McDonald's: Really, you *shouldn't* have

Up until this weekend, if you asked me the last time I ate at a McDonald’s, I would have honestly answered “I don’t know.” (I once asked Dan this question. “Can you even remember the last time you ate at a McDonald’s?” I seriously don’t even know what combination of bold, underline and italics that I could use to convey the amount of sneer and disdain that was actually in my voice when asking him. But it was like I had just caught him cheating. Turns out he could remember. Very easily in fact. He’d had a Big Mac just that afternoon. It was like I could smell the shame on his clothes. Also, I believe that same day, I totally alienated Dan’s wife’s friend – a supposed cosmetologist – by saying something like, “You give facials for a living and you want us to stop and eat at McDonald’s?” I seem to remember Dan thinking this was hilarious, Colleen silently rolling her eyes and probably thinking something like “my husband and his idiot friends” and the skin lady silently glowering in the car silently counting down the seconds until she never had to see me again.) My fast food of choice is generally Chick-Fil-A (you west coasters are *really* missing out on this place...) and Taco Bell, both of which allow me to eat a meal and leave without feeling all McDonalds-ey. You know, that heavy, filled with grease and self-loathing that comes with eating virtually every Mc-Item.

Anyhow, I found myself having breakfast at a McD’s this weekend, a sausage McMuffin that actually was pretty good. So at our table was this large graphic proudly proclaiming all the good that McDonald’s was doing. As it was pointed right at me, I couldn’t help but notice this image: 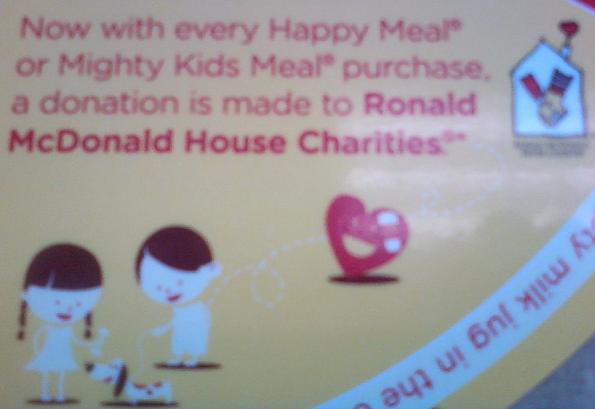 At first I thought, “Wow! That’s really great. McDonald’s is giving back.” Then I noticed the “*” after "Charities." So I started looking around the table for the other shoe. And then I found it. Here:

(Lady Phone's camera let me down a bit with this one; it says "McDonald's donates a penny per Happy Meal or Mighty Kid's Meal Sold.") Seriously, a penny? Really, McDonald’s? You are donating a WHOLE penny of each $4 Happy Meal sold and you are proclaiming it with the same enthusiasm as if you were the company behind the cancer cure or stopping the Gulf spill. So for every 10,000 Happy Meals sold, you bring in like $40,000 and donate a whopping $100? Granted, that IS technically better than nothing, but from the deal you were making about it on the tables in the restaurant, I was thinking that you were going to dig a little deeper. LIke maybe a whole dime or the traditional 10% tithe. I know that Paul Newman donated ALL of the profits from his food line (pasta sauces, salad dressings, wines, etc.) and all he has is a small blurb on the label.

I also happened to peruse the nutrition facts on the back of my little tray liner. Turns out the guy I was with ordered THE absolute worst thing possible on the McDonald’s menu. I had always thought this distinction belonged to the Double Quarter Pounder with Cheese, but turns out that is only 60% the food nightmare of the real winner; the Big Breakfast with Hotcakes. When you toss in the syrup and butter, you get a heart-punching 1310 calories, 60.5 grams total fat, and 2225 mg of sodium. Cap that off with a 16 ounce McFlurry with M&M’s and you add in *another* 1050 calories, 35 fat grams and 144 sweet-sweet sugar grams. Ba-ba-ba-bap-ba... 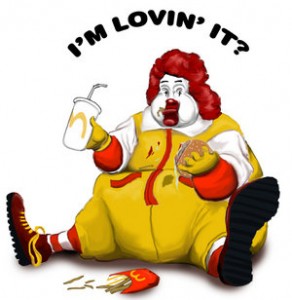 Dan says...
Ask me NOW if I can even remember the last time I ate at a McDonalds!
ASK ME NOW!!!


It was this morning wasn't it? Go on...this is a safe place and you're among friends. You can tell us.....
Reply PR Buddha
4:54 PM on July 21, 2010
*stands up, clears throught*
Hi everyone, My name is PR Buddha (crowds says, Hi PR Buddha) and I'm a 6 piece McNugget mighty kids meal with and Orange Soda addict.
My last relapse was over two weeks ago, I'm not proud of it, but their McNuggets dipped in bbq or honey are so nom nom nom nom...


Hi, PR Buddha! Now group, let's help PR Buddha see where this path is leading her... 6 piece McNuggets; 280 calories, 17 fat grams, and a luscious 600 sodium mgs. Then the small fries; each one like a nail in the coffin from nature! (Or wherever McDonald's genetically engineers their potatoes.) 230 more calories, 11 more fat grams and 160 sodiums.

Reply G. Law
11:50 AM on July 22, 2010
OMG. Someone should stop them, I think the terrorists have the wrong guy. The last time I ate McDonalds was when the 20 piece chicken nuggets(yes I said 20 piece) came in a kooky Chinese take out box... Mulan... That of course is a lie. I like their fries, which rhymes with lies.

Reply The Nancy
2:03 PM on July 22, 2010
I used to be a Double Quarter Pounder with Cheese and a Dr Pepper kinda girl. One glorious evening I accidentally read the nutrition facts on the box as I was dining. Sadly i have not had a DQP since that night. Now I indulge in the 10 piece meal with sweet and sour sauce and refuse to look at the nutrition facts. John don't take that away from me. I need something.

The Nancy says...
Now I indulge in the 10 piece meal with sweet and sour sauce and refuse to look at the nutrition facts. John don't take that away from me. I need something.


Admitting you have a problem is the first step to a cure, The Nancy. The only thing I'll say about your 10 piece nuggets is that they're exactly one-half the nutritional nightmare of Geoff's 20 piece serving....

Reply Craig
10:57 PM on July 23, 2010
West Coasters need not be in the dark no more. At first, I thought the furthest west Chik-Fil-A had traveled was Utah. But, last summer, while driving through L.A., there it was, the mighty bird in red. I was so shocked/ecstatic, I almost crashed my car. Instead of crashing, I did an insane U-turn (in LA traffic mind you) and blasted straight to my chicken sandwich....but wait, why are there no cars here....*&$^#$!! It was a $%@[email protected] Sunday!!!!

Craig says...
West Coasters need not be in the dark no more. At first, I thought the furthest west Chik-Fil-A had traveled was Utah. But, last summer, while driving through L.A., there it was, the mighty bird in red. I was so shocked/ecstatic, I almost crashed my car. Instead of crashing, I did an insane U-turn (in LA traffic mind you) and blasted straight to my chicken sandwich....but wait, why are there no cars here....*&$^#$!! It was a $%@[email protected] Sunday!!!!


There's a CF in Fairfield, CA. Amazing. It IS the best.

Reply The Nancy
10:43 AM on July 26, 2010
I drive by Chick-fil-A everyday on my way home. The nuggets are awesome and the grilled chicken is fabulous as well. They have changed the way the make their Grilled Chicken and it is "healthier" or something now: whole wheat bun, tomato, lettuce etc. I like it the original way they made the grilled chicken: white bread bun with the butter on the bun and 2 pickles. After several trips and a phone call to the supervisor on duty I was told how to get what I want. I now sound like the official CFA nerd when ordering my sandwich and telling them which buttons to push on their register! (Chicken sandwich "switch meat")
BTW there is a McDonald's accross the street but we have abandoned that part of the blog long ago.
Sorry that you West Coast guys have missed out on CFA for so long...

I can vouch for Geoff - there is a sweet, heavenly oasis in Fairfield! When I was pregnant with Holden, Geoff was my intrepid copilot as we trekked off in search of Chick Fil A, Papa John's Pizza and Captain D's (all in Fairfield). I had been craving those Southern franchises like you wouldn't believe. And I ate them all in one day. A fact I am simultaneously proud of and repulsed by. It happens.


"Switch Meat." That both makes me giggle and vomit a little in my mouth.