So we were sitting at church yesterday and my daughter, Lauryn, now 3 1/2, grabs a pen and one of my MANY CES notepads and starts drawing. The first thing I notice is that she is totally holding the pen correctly. (Well, she is totally holding it like me, which is something like a two-fingered death clutch with thumb support.) I'm not sure when she made this breakthrough, but this is the first time that I've noticed that she wasn't clutching the pen in her fist like she wants to use it as a stabbing weapon.

So she starts drawing. Fist some big circles. Which then turn into faces. Then some eyes and arms and legs. And she says, "That's us. That's our family." And we are all pretty much to scale. I'm the one with the giant, hydroenephalitic head. Then she draws something else at the top. "That's our TV. We're holding hands watching TV." Then she draws figures in the TV. "We're watching Yo Gabba Gabba. That's why you look angry." I have expressed MANY times my disdain for Yo Gabba Gabba. I believe my techical term for it is "retarded." But Lauryn tries to sneak and watch it when I'm not around. (OK, yes, if you recall the opening, we ARE sitting in church during all of this. So, yeah, I wasn't getting a lot out of it. Do recall that I AM reading the Bible -- just finished Jeremiah -- so I've got that going for me...) Then Lauryn starts drawing people inside the TV. "That's Muno. And Brobee. And Plex..."

So here is the finished drawing: 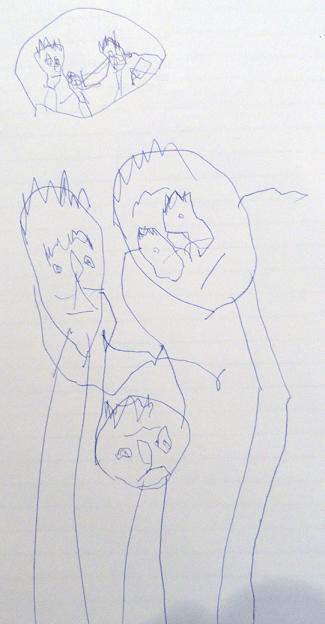 Now, granted, this is not going to get thrown up in the Louvre any time soon, but for a 3 1/2 year old, it's pretty frickin' amazing, the detail and the scale. (Though it does look like Dana might be rockin' a little bit of a moustache, which I can assure, is not an accurate representation...) But then I thought the image and style was kind of reminiscent of other artworkd I'd seen. So I Googled Picasso. And saw this: 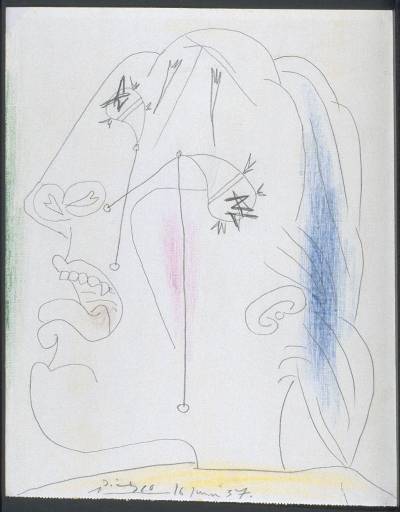 Now, I'm not saying these are identical, and Picasso's has some color and shading elements to it that are missing because we didn't bring Lauryn's crayons. So, with those caveats in place, I feel it is safe to start the bidding at $100,000...

Reply Keely
4:14 PM on July 26, 2010
Do all kids begin drawing people like this? Both Kinsley and Holden's rudimentary figures started out as egg shaped beings, with legs and arms that come straight off the face. Is this how kids see people? Is this the way we were meant to be in our perfect state? Intriguing...

The Nancy says...
My Great Grandmother had the best saying..."Every Ole Crow Thinks Her Baby's the Blackest."


Oh, that's great! But, just to be clear, I'm not saying that Lauryn is the Blackest....

Reply [email protected]
7:02 AM on July 29, 2010
I was there and saw the finished picture. She is amazing to say the least. Save that picture and when she does have one of her pictures in the Louvre she came look back at her earliest beginings. Good job Mary Sun Shine.

Reply [email protected]
3:49 PM on December 1, 2010
I have to say, I'm pretty impressed by the unity shown in the lines of hands that connect all of you together?she obviously feels very loved. And I have to say I'm less worried about the "mustache" (and uni-brow??) and more worried that Lauryn may be accurately portraying laugh lines on your faces!!
Reply Dani Escobar-Sinn
5:06 PM on March 4, 2011
My daughter's drawings started out as "Egg" people also...with arms and legs attached to the head. In some weird way I always thought they looked like a form of tadpole in the middle of its metamorphosis...which can be said of humans in their most primative state...after all, we all looked like tadpoles at one point...