I thought that technology had reached its zenith when I was E-marketed with an offer to cast aside my lame, SD lifestyle and step up to the surreality which is living with HD Vision Sun Glasses. They promised that I could live my life just like I’m doing right now, except that it would be better. 1080p times better because it would be in HD. And I just couldn’t imagine that living in HD could actually be improved upon. (Sadly, actual HD Vision was more like looking through a tall glass of stale, summer urine on a hot, clear day. And had the fashion styling that inspired one person to say, "Dude! My grandma has a pair of those!" And unless you are 3, with an abnormally heightened vocabularly and sense of style and your grandma is Jenny McCarthy -- technically a step grandma -- then I'm not taking that as a compliment.)

But life can get better. In stereo. Because seeing is just one of my 8 senses. (I’m counting style, sarcasm and awesomeness.) And what good is seeing in HD if I’m still only hearing like the rest of you barely functional vetebrates? Surely there must be a way to elevate myself above the huddled masses.

I discussed it with an ex-employee, Paul Butz (who insists on pronouncing his name “Butts” even though I’ve begged him to change it to something that would sound more like “Byutz” such as the plural of that place in Montana if not for himself then to break the cycle and save his children from the life of agonizing teasing that being called “Butts” will mean) who has an audiology background. Paul said I could give myself hearing aids. Hearing aids that would give me…Bionic Hearing!

Ask any male that grew up in the ‘70s who they wanted to be, and if they have one ounce of cool in their soul, they’ll say with nary a moment’s hesitation, “Steve Austin, The Six Million Dollar Man.” And they’ll say it in a way that you’ll know they meant to have each word capitalized.

I grew up in the ‘70s, and -- despite what Lady Phone will have you believe -- I AM a male. (Although it is getting more questionable since Dana recently purchased me an accessorizing coffee mug in the same shade of Mangenta to accompany me Lady. If you see me out and about wearing pink shoes, I give you full permission to come up and neck punch me.) I *loved* Steve Austin.  I once jumped off of a high dive in Palm Springs despite the fact that I knew deep down that doing so would quite likely kill me. The fact that others had done it – in fact, *were* doing it even as I watched – meant nothing. That high dive would be the death of me. But despite that fact, I climbed the stairs and jumped off that dive. Because my dad promised me that if I did, he’d buy me the Steve Austin AM Backpack Radio for my Steve Austin Action Figure. You know the one. Where you looked through a hole in the back of his head for “Bionic Vision.” (Sadly, “Bionic Vision” seemed to reduce your field of view *considerably* and made objects look insanely off in the distance.) Where you would roll up the skin on his arm to expose his awesome bionics. I didn’t even know what AM Radio was, but it went with Steve Austin, and that made it awesome. I would even ask my mom to cut my hair so I looked like Steve Austin. (Which didn’t seem to vary the cut or style of my hair one iota, but somehow my dad was in on the deal and when I asked who I looked like following an awesome Steve Austin hair makeover session, he knew the right answer!)

But I let the idea – as insanely awesome as it was – of bionic hearing die. However it was resurrected today, when in my e-mail in-box, cruelly spam filtered out by the heartless automatons at AOL was an offer so dripping with awesome that I had to share it: 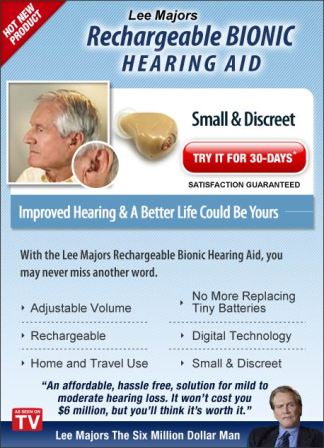 “John Sciacca, blogger.  A man barely alive. Gentlemen, we can rebuild him. We have the technology. We have the capability to build the world's first second bionic man.  John Sciacca will be that man. Better than he was before. Better, stronger, faster. More cynical and with a carbon fibre ass-switch. Oh yeah. And with super-awesome hearing!”

In fact, I might be listening to what you are saying…RIGHT NOW! With two of these babies in place and some stereo bionics rockin’, you don’t even need to say it; just THINK it and I’ll know. In fact, I might know it before you think it, able to actually hear your thoughts before they're formed on a sub-atomic level. Scary isn’t it? Now you need to watch even what you’re NOT thinking around me!

Plus, with a Lee Majors brand hearing aid, I’ll be rocking the convenience of Digital Technology and a rechargeable battery and it comes with a DVD AND instructional pamphlet. And you all know how I love me some instructional pamphlets! And you know that there are only two settings on the adjustable volume knob: Maximum and Bi-frickin'-onic!