My Kitchen to Chef Ramsey: Bring it!

A couple of weeks ago, I mentioned how I was riding the unexpected tsunami gift wave from my parents. The first couple of candles on the Menorah were a new car. (Granted, not new-new, but 10 years newer than my car. But, I already went over this; click the link if you want to know more...)

So, it turns out that, unbeknownst to me, my parents have been thinking that my kitchen appliances have belonged in a third-world soup kitchen for some time. Basically, not a Hell's Kitchen, but more of a hellish kitchen. Granted, I didn't expect Fine Living to be coming round any time soon to set up a photo shoot, but the white appliances looked as circa 1995 as when they were installed, and change is always scary and something to be feared. And sure, the oven had a large crack running through the Ceran cooktop meaning that we only used half of it. And, OK, the handle on the microwave was a little wonky. And, yes, I'll admit that occasionally you would go to get ice out of the refrigerator's door dispensor and your glass would come away with this odd black schmear. And, come on, who out there can say that their dishwasher has never backed up and had water drain into the kitchen?

So, during my mom's last visit, we went down to Home Depot and she made it rain. Once I clarified that "We want you to get whatever you want" was A) limited to the Home Depot appliance section and didn't include any visits to the Rolex or Aston Martin stores and B) didn't include building a commercial walk-in in our home, I was set. Dana and I knew that we wanted to go stainless steel, as it is just so modern and commercial and straight-up playa. So we went through picking and choosing a dream kitchen.

When the delivery guy came, I was chatting him up and he was unloading all of our new babies. I mentioned that hey, if it's cool with your boss, you're welcome to take our old appliances for yourself if you need something. I mean, they all still work. That's when he started laughing. "Ahhh, thanks man, but all my stuff's stainless. I might be able to take your old stuff to habitat for humanity or something..." (Also, there were two delivery guys: a super cool, young black guy that did like 80% of the work and a large, very sweaty white guy that stayed outside almost the entire time. At the end, I took, the black guy aside and handed him $30, a twenty and a ten. I said, "Look, maybe I gave you $30 to split with your partner; or maybe I handed you two tens. Or maybe I was a jerk and didn't give you anything... I'm gonna let you decide what I did." That's when he said, "Man! I knew you was cool!")

This is the new stove and microwave oven. The microwave has a super-sexy Bang & Olufsen-esque feature where the top vent panel folds out all Transformer style when it needs to whisk steam and excess cooking passion away. Yes, I would have loved to have gone with a gas stove, but we don't have natural gas here and the phrase "You're cooking with Suburban Propane!" doesn't have quite the same ring and actually costs a considerable amount. For history buffs, the location above that router is where my IceBox Kitchen Internet Appliance used to be mounted. That was one of the very first products I reviewed for Sound + Vision that they never asked back. It lived in this spot for about 5 years until one day a few months ago it started spewing out black smoke when Dana went to watch a showy-show.

OK, seriously, that fridge is so damn sexy! See that giant sun-flare coming off it it? Yeah...it's just naturally there all the time. Reflecting the awesomeness from within. It's so frickin' sexy that when the Terminator hunter-killers return from the future looking for John Connor, I am going to buy myself some extra time when they come strolling through my kitchen, spot this bad girl, and then temporarily disengage from Terminate-mode and start doing dirty, dirty Terminator sexy time things to my fridge. The doors on this thing are like 4 inches thick, making each beer and frozen pizza that I place inside feel like it is been placed into a special John food vault. Also, it has this cool, blue-white lighting when you open the doors that makes all the food look like it is prepping for a catwalk on Next Top Model. Plus, it looks so sweet next to my Saeco macchina di cafe.

Yes. My kitchen floor looks like brick. No, I didn't pick it. And no, it isn't brick. And no, practically nothing survives if it is dropped onto the floor. But that is my new dishwasher. And it is smooth and stainlessy. And it is *whisper* quiet. Which is very important when it is about 8 feet from my head and Dana decides that she wants to "run a quick load" during a movie. And by "quick load" she means a regular full length load that will take almost the whole movie and make these loud sheee-sheeee-sheeeesh-gurgle sounds during parts of the movie that shouldn't have any of those sounds. And that is really insulting to all those foley artists. And if I won't stand for anything else, I definitely WON'T stand for having the work of foley artists insulted. This new dishwasher is actually nearly as quiet as my projector. It washes dishes with all the noise of a Carthusian monk who is standing barefoot in my kitchen carefully wiping down each plate one at a time with a single Q-tip.

So, to christen the new kitchen, I decided that we needed to make something special and new. So I called Dana from Costco and asked what kind of dish she could Google about lamb. She found something terific, a lamb balsamic reduction with ingredients that we had on hand and lamb that was mere feet away. Then I found a nice red wine. Because if all else failed, the red wine gleaming off the appliances was going to get me some sex points with Dana.

So, here I am breaking this new beauty in. Cooking lamb on one eye. Broiling bread in the oven. And actually warming a plate in the warming zone to keep all my deliciousness fully delicious until it is time for plating. A few hours before, I didn't even know what a warming zone was. Now, here I am. Using a warming zone! My warming zone. You could say that I have mastered the concept of warming zones.

And here is the final, plated, uh, plate. It was perfect. A great sear. Juicy, flavorful. seasoned beautifully, with not a stupid donkey in site. Out of nowhere, I have a new specialty. And I invite some of you to come over and enjoy. You know who you are... Oh, and Jean Phillippe, move your ass and open Hell's Kitchen! 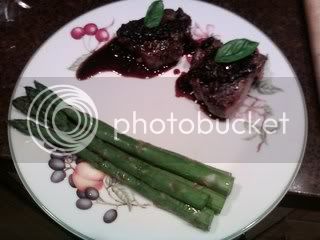 Reply [email protected]
6:40 AM on August 11, 2010
Can't wait to try your new dish. I hope it was as delicious as it looks..
Your new kitchen looks great. It will be especially nice not to have black things floating in my water from your new refrig when I come.
Reply PR Buddha
1:43 PM on August 11, 2010
Hopefully Santa will bring you some new tile for Christmas...before the sexy new appliances form a union and demand it! HA HA HA HA HA HA HA

John Sciacca says...
Wait?! How did Dana sign in under your name and post this? Is it really *that* bad. (Dana shouting off-camera: YES! It's really THAT bad!) [slinks off and rubs up against oh-so-sexy new refrigerator...]

I too once lived in a house with super FUGLY looking floor tile..I feel your kitchens pain -- the new appliances just amplify the butt ugliness of the floor...you better buy that woman some sexy tumbled slate tiles and get to work!

PR Buddha says...
I too once lived in a house with super FUGLY looking floor tile..I feel your kitchens pain -- the new appliances just amplify the butt ugliness of the floor...you better buy that woman some sexy tumbled slate tiles and get to work!

Reply Shoppa B2B Marketplace
6:09 AM on February 9, 2021
Very informative post! This post gives truly quality information. I find that this post is really amazing. Thank you for this brief explanation and very nice information we have same services you can visit our site