My reservation on The Reservation

Much to Dana’s delight, today finds me once again back on the road – with a 6:15 AM airport drop off no less! – and as I write this, I am in my room in Phoenix, Arizona. Why Phoenix you ask? Is this just some ploy to try out the new Gold status on US Air? Well, yes, of course it is. This might be hard to explain to the non-travelers out there, but you can never really feel more powerful, more alive or just more all around like a musky-scented, pheromone and testosterone filled alpha male than when the stewardess draws the curtain closed on those drones sitting behind you in coach while simultaneously handing you a drink. For that brief moment it is like God is only looking at you. And he is nodding in approval. Where the size of the man is measured by the rarity of the metal of your preferred status, and well, brother, mine is now Gold. Pipe down all you Silvers! (Sadly, I was only batting 50% on upgrades today and had to endure the just below third world which is coach, as I sat in my seat for 3 hours and 50 minutes staring at the exit door and fighting back the screams of “I can’t stand another second with you awful people! I wasn’t meant to live like this!” )

OK, I’m actually out here for business. We do an inordinately large amount of business with a distributor called DBL that is located in Phoenix. And in the 10-ish years that we’ve been doing business with them, we have yet to actually meet any of them. For all this time, I only know them as Brian Whittington at extension 1145. So they are hosting a vendor line-show thingy and they invited me to come out (ie: “we will pay for your airfare and put you up in a hotel for two nights” ) and partake in the fun.

The event is actually being held at a hotel that is part of an Indian Reservation. (And much like the famed/besmirched Harvard comma, I’m not totally sure the capitalization rules on Reservation, but I’m going to opt for capital R as I don’t want to take any you’ve-stripped-us-of-our-dignity! chances.) On the way in, was a sign proclaiming “CASINO ARIZONA” which was clearly a name that taxed Don Draper’s entire creative team. They went with the much classier “Talking Stick” for the resort, and let me tell you, brother if this is what a stick sounds like when it’s talking, then we should have been listening a long time ago! This place is nice! (OK, calm down. It’s no SLS Beverly Hills nice, but it's definitely Phoenix nice.) It has only been open for about 6 months too so it is really clean. Plus, this is one of the first hotels to buck my “the nicer it is, the more they’re gonna gouge you for the WiFis” hypothesis. Say what you will about Reservation living, but the natives know what Johnny likes, and what Johnny likes is the free WiFis. (The login is “guest” and the password is “coyote” by the way. You know, in case you ever find yourself in the Talking Stick parking lot and need a quick Net jump on... )

So I check into my room and I immediately receive the kind of welcome a man of my Gold status has come to expect. 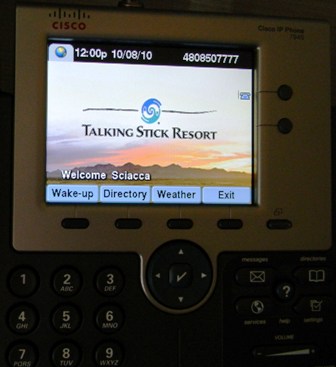 The whole room is really nice and modern looking and even has an iPod docking radio. (I know. It’s the little things that make you miss home.) I know how you all long to imagine that you’re here right alongside me, so here are some photos for your imaging pleasure. 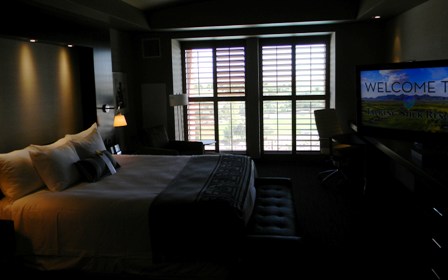 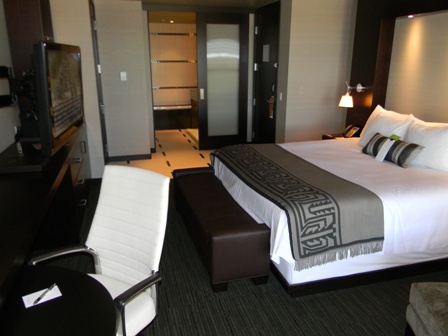 Notice the white chair made from the hides of rarest White Buffalo. Hunted once a year on the Great Day of Becoming a Man where only the truest of heart, spirit and bow can claim the mighty White prize. And then after thanking the Great Hunter for providing the kill, the new man warrior returns victorious to his people where he then carefully skins the Great White hide and meticulously crafts it into a modern, Scandinavian looking office chair. And now I am sitting in that chair. 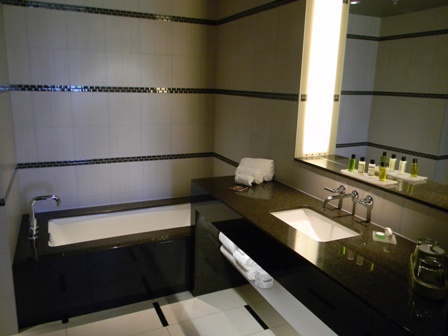 This is the bathroom. This is where my people clean themselves after a long day of traveling coach. 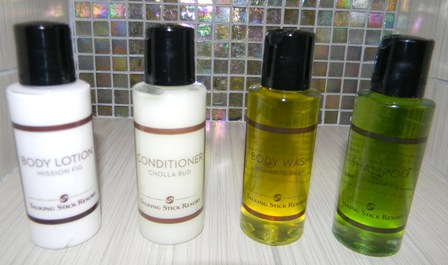 I’m not entirely sure what to make of the shampoos, lotions and body washes they have included. With names like Mesquite Bean, Mission Fig, and Chaparral I’m not entirely sure if I should be rubbing them on my body or mixing them into some kind of tonic, tincture or health curative elixir. Or in the case of the Cholla Bud conditioner perhaps one is meant to smoke it in some fashion. I fear even taking these items off the Reservation, where stepping out of this legal Thunder Dome with a bottle of Cholla Bud might be punishably by covering in honey and tying to an ant hill. Though I guess these names are less off-putting than “Tears of our People Body Rinse” and “Revenge on the Pale Face Milled Soap.”

This pool is huge. Like ha-yoooooge. What it lacks in style it makes up for in sheer massiveness. 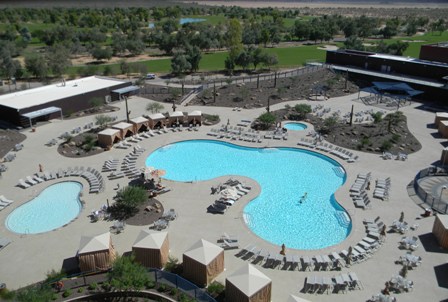 Also, they have their heart right on food and beverage pricing. As is becoming somewhat of a tradition, I ordered chips with guacamole and a beer (the awesomely named “Four Peaks Kilt Lifter.” Sadly I found myself with neither a kilt nor the plushy hotel robe -- as much as I want to, I just can get the nerve up to suit up and actually be a robe guy -- so I can’t comment on the accuracy of its actual kilt lifting abilities) and it was only $10.50. Not bad. I raise my glass of Fire Water to you, Talking Stick. Then I drain my glass to you. Oh, and I had a book with me, and it is totally true; White People love sitting by water with a book. I didn't even OPEN the book and it was actually improved by the nearness of the water! 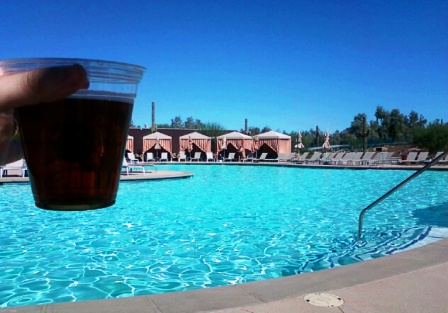 I chatted up my server, who was from the Pima tribe that owns all the surrounding land. As is my habit, what she had hoped was going to be a quick chat of “Here’s your beer!” turned into, “So, tell me about Reservation living? Like ALL of it.” (Out of respect for Dana – who has just enough Native American blood in her to actually say that she does but not enough to get any of the sweet-sweet reservation money, though she does have one picture as a little girl where she has just the *cutest* little Pocahontas look – I did manage to refrain from asking the question on all of your minds; so NO I don’t know if liquor really makes her people go crazy. Shame on you!) Turns out that all of the tribe receives a quarterly dividend check, though she was dodgey about saying how much this check was. However the tribe had to front SO much money for this hotel-opolis (apparently the Stick did some serious Talking to the banks and it was demanding quite a bit of moneys) that they are foregoing their dividend checks for some undefined period of time. However if the casino starts pulling down big money like they are all hoping, she said that the dividend check would be enough where none of the tribe would actually have to work. She also said that every person gets their college tuition paid for. Wherever they want to go. She already had two degrees (one in cosmetology and another in dance) and is planning to go back for another. I mean, why not?! I'd be the most educated person -- dare I say, Wise Man! -- on the Res. Of course, I wouldn't be ON the Res, I'd be at Cal, Stanford, working my through the Ivy Leagues, some studying abroad. You know, all for the pursuit of education. So take that, lottery moneys! You’ve got nothing on Reservation moneys!

Also nice was that while sitting by the pool I got an e-mail from Jeremy G saying that if I wanted to write a little somethin-somethin about the event he would pay me a little somethin-somethin for it! Serendiggity! So I texted Dana and told her the good news, how now I actually WAS working out here. Then she texted back that that sounded good, because she had already spent the money. It just proves that old saying true: When God closes a door, Dana opens a wallet.

Here is a multi-part photo I stitched together (still figuring out this new camera, though the Crown Black cam bag traveled in Crown Black style!) of the landscape outside of my window. I had an oddly reflective moment on the car ride in where I was looking out over the fenced in reser – ah! You almost got me! – Reservation land and thought back to what this must have looked like 200 years ago. There are acres of undeveloped scrub land that it is easy to imagine have remained little changed.

So tonight is a DBL reception that calls for “Dress Code: Resort Casual.” I’m not sure if that means I’m supposed to wear the robe or not. It is a resort and that does seem awfully casual. Or maybe I'll go jeans with no socks. Or underwear. Dilemma.

Reply Kirsten
4:34 PM on October 9, 2010
White people need to like reading by the water because the tiny rectangle of book shade helps protect them from sunburn. Especially in the desert.