It was the best of times...No, it was mostly the worst.

All my troubles seemed so far away.

Then I booted up Crestron and they were here to stay.

Oh, I was boned, yesterday!

I’m not half the programmer I used to be.

Now there’s a deadline hanging over me,

Crestron, why you, no worky?

So yesterday *should* have been a great, easy day. If you remember a while ago I mentioned the terrific Runco help me/help you trade-up programming they were offering to incentivize people to buy their new Q projector. (Seriously, this projector is sa-weet. If you have been thinking about getting rid of that old hunker hanging like a forgotten Cold War relic from your ceiling, now is the time, man! Do it! Preferably with me, ‘cause, well, I likes to sells the Runcos.) Well, I incentivated one of my first high-end customers. Truth is, is didn’t really take a whole lot of action on my part. We had both been waiting around for YEARS for his original Sharp XVZ9000 projector lamp to die – why won’t you just die, damn you! Die! – but this thing held on like some kind of life holding on thing -- imagine a twisted, life resilient hybrid bastard offspring of Westworld's Yule Brynner and the  Terminator chick from T3 -- for years while I would go over to his house performing bedside visits hoping that each time I fired it up I could find some plug to UNplug and that would be the time that I heard that sweet lamp flatline. But this thing had a will to live that wouldn't quit. And a lamp strong like bull!

Well it finally happened and not on my watch so I’m totally in the clear. So he comes by the store and says it’s time to upgrade (can I get a Hallelujah!) and what do I think he should get. I shows him the Q, he likes-a the Q, he buys-a the Q. My guys, they installs-a the Q.

Oh, sidebar… So this system dates back like 8 years ago when our industry was using some crazy three-headed Hydra of a cable called component video. That’s com-pon-ent. See, it actually took THREE cables to carry the video signals. (Though, the RED didn't actually carry red and the BLUE didn't carry the blue and the GREEN, well, don't get me started on the green...) And then some others to carry the audio signals. And since his old projector was made back when HDMI was just a gleam in some mad scientist’s (or Noel Lee’s...well, six of one...) big-dollar-signed eye, we had to drive the entire system with component. So here is the cabling that was replaced by six so-easy-to-manage HDMI cables. Crazy, huh? And, no. Black, black, no trade back, I’m not taking them back. 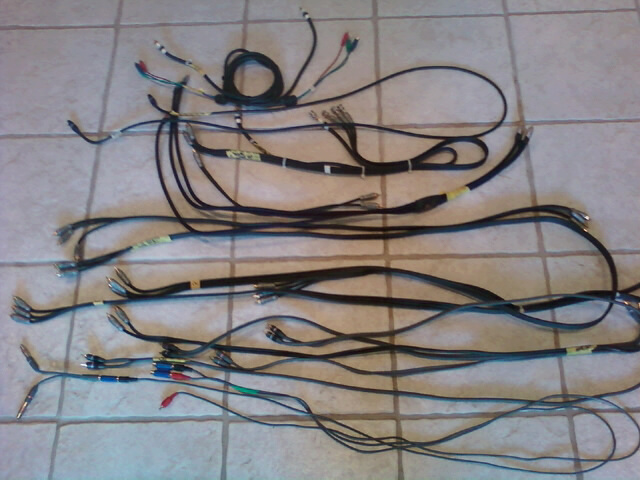 So here’s how the day SHOULD have gone. Imagination glasses on! I show up. I glad hand the customer. I point to my installers, “Men! This is what’s on the queue -- wait for the hearty laughter all around at my witty rejoinder to die down; Explain why that was funny. Queue, Runco Q…? No? (lone tear trickles down check...)  – today. We’re gonna run HDMI cabling to the two TVs flanking the Stewart screen. We’re gonna pull down the old projector. We’re gonna move the mount back 1 foot to the new location. We’re gonna run HDMI to the new projector. And we’re gonna rewire the whole Middle Atlantic rack for HDMI and pull out all the old cabling and let the customer use it for tying up yard debris. Then, when you’re done, I’ll return to calibrate and beautify and make it all Crestrony good. Right? Right!”

So, my team handles their part. Meanwhile I skulk back to the store with the customer’s Crestron panel to start what should have been an oh-so easy program change. Basically out with the Sharp’s power commands and input flips and aspect controls and in with like 15 Runco commands. Total amount of time required: sub 30 minutes. Except no. Not 30 minutes. Actual time involved like 8 hours. “Why, for the love of all that’s good and holy, why?!” you ask. Because my original programming was lost when my old laptop’s hard drive had a grand mal seizure and died. Taking the HOURS of programming – and oh, so many secret-secrets! – with it to the cold, digital grave.

Now, granted, I can’t lay all of the blame at Crestron’s feet. Some of the blame clearly lies with Michael Dell and whatever Chinese knock-on drive was in my Dell. Also I *probably* should have made a back-ups of the programming and stuck it in the client's file on a thumb drive. I *should* have kept a back-up on another compu… Wait! What is this! Holy crap! Here’s a copy of the program! On my desktop computer. Open, load, wait, keep your hope in check, John, you might just get lucky here, but let’s not get too… OH!!! CRAP!!! WHY?!? Even though I backed it up, I apparently didn’t ARCHIVE it so I didn’t get the whole program. Just chunks. Like a corn-poop. Also didn't get any of my IR remote drivers that I carefully learned and created. Immense sadness. Let me just restart from nearly ground zero, shall I?

I now TOTALLY understand the anger/frustration/I’m gonna kill you! threaten-eys that clients feel when a Crestron programmer leaves a job and takes their work with them. I needed to do a simple, oh-so-simple upgrade that should have taken like no time. And with virtually ANY other control system, I could just pull my previous programming out of the processor, clickety-programmity-and-downloadity and Bob’s your uncle! Let’s watch some video and drink a celebration beer! But now Bob is most definitely NOT my uncle and the only thing I am celebrating is that I have hours of programming ahead of me. Lower-case yay. Way lower.

So then I get the programming ALL doney-done and go to load it into the processor and discover that I am missing some kind of .dll file that apparently is ONLY germane to Crestron but that somehow didn’t install. Goggleizing the file name returns all of these hits about spyware and registry problems and “Why don’t you just tell me the problem you want me to fix?” offers to install scanners and mal-ware.

And as much as I doubt that a Crestron processor or touchpanel has balls, but if they DID, I would have so been punching them like a speed bag. And, granted I am no master Crestron programmer. I’m not even a Jedi Knight of Crestron programming. I’m more like a youngling who somehow Midichlorianed his way into training and has Padawan’d just enough to figure out how to turn his lightsaber on. But then everyone stands back and watches to see whether or not he’ll elegantly hack off his own arm. And the programming software is isn't it ironic, dontcha think named SIMPL (pronounced simple, which I can assure you it is anything but.) Because I'm guessing if they called it IMPSIBL or FRIKNBRTL it wouldn't have quite the same marketing ring. In reality, it is the kind of simple the way that e=mc(2) is a little math teaser or that climbing the final pitch up to Everest is often called "Los Easy."

Also there are few things in this world that can make you feel as functionally retarded as calling and talking to Crestron tech support.  And the excruciating wait time while you are impotently sitting there on hold just  builds up the agony to an unbearable crescendo for the impending brow-beating that you know you’re about to get because you can just tell that every other tech is arms deep into helping someone with a *real* problem like, “Dude! The Crestron altitude controller on my client’s G7 jet went out! We’ve got to remote in NOW before this thing craters into a field! True Blue support, STAT!” So, when he gets to me and I’m like, “Yeah, my up/down/left/right buttons on my satellite receiver keep sticking. What do I do?” even I feel a bit like a maroon. Then I asked the tech another question where he went into this lengthy description of creating some kind of variable using these techno programming terms and techniques. And after about 3 minutes of talking I just finally had to interrupt with, "I'm sorry. I have absolutely no idea what your talking about." Furhter guaranteeing that I feel like a SIMPLeton.

Never has someone been in such need of a Bo-Bo Spa happy ending fun-time massage. Though, the happy ending in this case was that the projector looks awesome, my programming finally came through, and the client is thrilled. Which is actually more happy. And less ending.

Reply indypayne
7:55 AM on October 28, 2010
And of course you immediately backed this up to a thumb-drive and put it in the client's file. And then immediately did the same for all your other clients. Right?