He shall be flogged with his own cable!

If you’re like me – and, well, if you are, then I can truly empathize with the difficulty which has been your life; we’re a tortured, often misunderstood genius, but hang in there, little kitten! – and you work at a custom install company, then your install company has a “Wall of Shame;" a wall that houses some of the nightmare work that you’ve pulled out of projects when you go in behind another “expert.”

Our Wall is back in our offices, and is literally a wall with cabling pinned to it. Something for the staff to look at and say, “Yep. That’s why people need us. Why we go out every day and do the hard things so other people don’t have to.” (Unrelated, I believe I’ve heard my Navy SEAL cousin use the same mantra.) Now, it would be all too easy to fill this wall with things like RG6 fittings that have been plier-crushed onto a wire with the sensitivity of a sadistic dentist or your-jacket-says-Cat5-but-your-termination-is-saying-Cat3. But those are far too pedestrian of mistakes to earn a spot on the wall. To make the wall, one must be truly creatively heinous.

Our previous worst cable “winner” was pulled out of a job when we were called in to replace a client’s projector. What we initially thought was just “Wow! These other guys really took the low road and only connected this via composite video. What a bunch of chumps!” which slowly evolved into “What the...?” and then quickly accelerated into an intense oil-field rage burn of “I CAN’T BELIEVE THIS!” 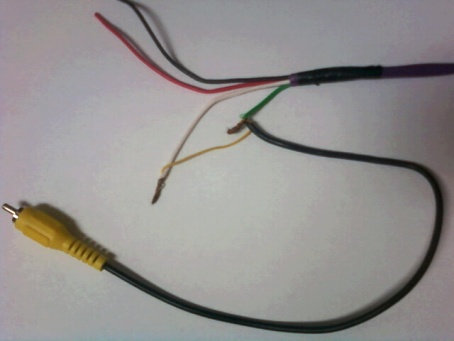 The cable feeding the client’s projector was 16 gauge, 4 conductor speaker wire. Because when I hear “video wiring” I know that I immediately think "16 gauge speaker wire." And not Monster either; I think nougat, off-brand, Home Depot speaker wire.  To complete the shame-fecta they chopped the end off of a cheapie video cable and then twisted it onto the speaker wire and then, in the classiest-of-classeys, electrical taped it together. They did have the CYA sense to electrical tape the entire length of the cable to shroud their mystery in a bit of black, plastic secrecy.

“Gee, Mr. Client. I have no idea why your new projector looks like total ass.”

So you’ve got to imagine that with that as the previous 100-year Flood Line high water benchmark, any cable that was going to unseat the current reigning champion would have to be something truly spectacularly, horrifyingly awesome. Like something you would remove post-mortem after Jigsaw decided to create some audio/video Saw torture device puzzle.

To continue reading and see the new winningest, worst cable ever -- which I am calling “Fail Hydra" -- click over to Systems Contractor News

Seriously, click over. This is my first post for self-proclaimed, #1 Fan, you're my hero writer, Glasseser Kirsten -- who is also under the Jeremy G New Bay Media corporate love umbrella -- so show her the love...