You know what irks me? Well, if you’ve been reading this for any amount of time you know that there are actually lots of things that irk me. But want to know what *really* irks me? Like some kind of nuclear powered irking machine, somehow capable of cranking out irk at 110% levels for a 100-year duty cycle until the irking rods are so corroded with angst, vitriol and bile that they have to be buried deep inside of a solid granite mountain for the next 100,000 years?

People that complain about their bills. By short paying them.

Now, I get that sometimes people have a question about a bill. I know that at times I have a question about bills that I receive. And like a civilized 21st Century person, I grab a phone, wade through a teleprompter, reach the person in Bangladesh, then ask for the *real* English speaking person and voice my concern. But when you are dealing with Custom Theater and Audio, it is a much simpler process. You grab the phone. You dial our store and a high-percentage of the time you get straight to me on the phone. (This high-percentage does not include scheduled John downtimes like blogging, reading industry magazines, if I’ve brought in any new gear to review, my afternoon mosey out to the mail box, eating my daily sustenance of the tears and broken dreams of others, etc.) So if someone has a complaint, I respect when they call. Sometimes (not often, but *sometimes*) the error is actually on my part; like a billing typo. What should have been 1 employee was 2 or what was .5 hours billed at 5 hours. (I once accidentally billed someone for twelve -- yes 12 -- Elan System 12s instead of 2. For $5650 each. Whoops!) “Yep, you’re right. That was a mistake. Here’s the correct amount.” Sometimes it actually DID take that long but the customer is wondering if we can knock anything off because due to time and unforeseen circumstances when we estimated the work would take 2 hours but ended up being like 5 or whatever. The point is, a call and reasonable demeanor goes a LONG way towards making me want to meet you somewhere between, “Pay me all my money or NEVER call me for help again” and halfway. Firm but fair.

Lately, the people that are clocking the highest percentage of “Pay you? Pa-shaw! You should just be happy that I let you do the work for me!” are doctors.  Dentists to be precise. (Don’t worry, Dr. Todd...this isn’t about you!) 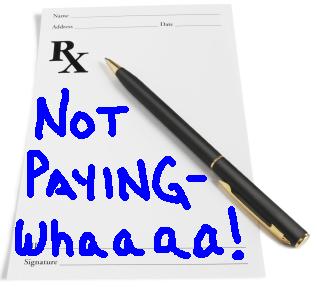 I’ve had two specific instances recently where some kind of God complex has not only elevated them above the need to pay for the work that they contracted us for, but placed them above just acting like a normal, decent one-person-interacting-with-another.

The first was a doctor we installed a new surround system for. When his check arrived it was for less than 20% of the total due, short paid by over $5500. No note. No explanation. Just a check. For $5500 less than it should be. So I called the salesman that handled his job. “Andy, what’s up? Did you work out some kind of payment plan with this guy?” (As a general rule, we -- and by "we" I mean I -- discourage payment plans. Instead, we prefer pay-in-full. If you need a payment plan, we call it paying by credit card. Then work it out with Visa or Mastercard. Look, we’re a toy store. No one has starved from not getting something from me. You want a toy, you gots ta pay for the toy. You can’t afford the toy? Save up.)  After Andy told me no, of course not, I called the doctor.

“Well, I’m having problems with my remote.”

So what I’m thinking is, OK, you’re having problems with your $250 remote. So of course the LOGICAL thing is to do is never mention the problem and relay your unhappiness by short paying your bill by $5500. Makes all the sense in the world. But instead I respond with, “OK. What’s going on with it?”

“Sometimes it doesn’t work. Like it won’t turn my cable box on. Then I have to follow the help screen to get it to turn on.”

“OK. I’m sure we can work on that for you. But did you ever call us and let us know about this problem?”

“No. I figured you’d call. When you got my check.”

Turns out his cable box behind the frosted glass doors misses the power command occasionally. So we adjusted the programming and the guy immediately pays. Still, that’s just SO lame. The takeaway for all of you people here is, a company cannot be expected to address a problem unless you TELL them about the problem.

Next doctor had a satellite radio that broke. A satellite radio that we didn’t even sell him to begin with. So I tell him that it is a minimum $75 service call to come and take a look at it. So we do. And determine that it is broken. So we replace it with a new one. Which also breaks after a couple of days. Which is highly unusual, so we go back and troubleshoot it again to make sure that something wonky isn’t going on, replace the radio again, and then bill him. For the $75 that I told him it would be. (This job was part of my “tired of eating it” post.)

Except he returns his bill with a snooty and terse little hand scrawled note that says, “I don’t pay for on the job training. That’s your job! And treat your customers with some respect.”

What the?! I don’t even understand this. And the respect thing is from WAY out in left field. Like over the Green Monster, past the parking lot, and getting a beer south of Southie. Again, I could totally understand if he were upset if I had billed him for all of the return trips and extensive troubleshooting. Which were required by the way. But I didn’t. I billed him for precisely the amount of labor that I told him it would cost him...at a minimum!

So I drafted a fax reply. And my reply started out, “First off, I don’t appreciate your snide comments about...” and it really picked up steam from there. This was not a fax designed to win friends. After I finished the letter I hesitated in front of the fax machine and then decided to share it with my partner. Who, as is his way, used some diplomacy to de-personalize, de-John and reel in my letter and make it into something more likely to build a bridge and less likely to Hulk SMASH!

Fax 2.0 explained that I didn’t bill for any on-the-job training, and that the installer that I sent had been with us for over 10 years, was CEDIA certified, had 1000s of hours of OTJ experience and was way beyond qualified to fix his satellite radio. And that I didn’t bill him for all the return calls. Or the time we needed to return when someone in his office put the receiver on the wrong input and couldn’t the system to work and called saying it was broken again. And that as far I was concerned, he owed us the $75 that I told his office manager it would cost before we even left the store.

So I send off the fax and his office girl calls up the next day. “Oh. I’m SO sorry. The doctor mis-read your original invoice. Where it said ‘CEDIA trained installer’ he took that to mean that you were charging him for the training.”

Douche. Da-HOOSH. So, this guy has the ass to be a Dick to me with his little comment, but isn’t big enough to call himself and apologize. Or even write a note on the second payment. So now he has earned a giant, Pooh-colored star on his file that says “Don’t Leave Job Without Collecting Payment.” The take home prescription here is, don’t be a Dick. And if you are a Dick – believe me, I know that sometimes it happens and is inevitable – at least be man enough to sack up and apologize for your own Dick-ness.