Occasionally manufacturers will run promotions where they give you some extra money – called a “spiff” – if you sell one of their products. Maybe there are too many in the warehouse, maybe they need a loss for their year-end returns, maybe they are just concerned that with their crazy, Ponzi-pricing schemes that all of us TV salespeople are on the brink of starvation out here. Whatever. I don’t know. Or care to know. What I DO know is that occasionally if I sell Brand X I gets Cash Y. (Actually it is generally a Visa card, but you get the idea.)

So, a few months ago a $250 card came my way, and in a moment of largesse – OK, it was actually August 4, the anniversary of the day Dana and I got engaged; great story here if you missed it the first time... -- I re-gifted the card to Dana. (Goodbye massive downpayment moneys for iPad version 2! I shall think of you whenever an Apple start-up sound is heard!)

“This is for you. Do whatever you want with it. No guilt spending. Enjoy!” So the card has been lying dormant in her purse, and my eye has been roving over it like Sauron atop Mordor thinking about getting my hands on The Precious. Even though we have a perfectly adequate – strike that – even though we have a totally killer, $600 Dyson vacuum, Dana has had her eye on this thing called a Shark Steam Mop. The Shark costs like $100, and Dana asked if I would buy it for her. This, to me, seemed like the PERFECT use for her card. To me. It was something she wanted that I didn’t necessarily want to pay for. To me. To HER this was a household item that fell under the giant umbrella of “things John buys.”

Anyhow, when the Black Friday sales started coming out, Dana used her coupon-ing Necromancy to find the Shark thing for $50. At Wal-mart. Sale starting at midnight. And her gift card started glowing a firey red, and mystical, Elvish rune characters started appearing. Lorem Ipsum Shoppingectur. It was being called by its Master.

We have never done the Black Friday midnight shopping thing before. I mean, generally the big deals are all about electronics, and I'm (fortunately) in a position where I don't need to wake up at 4 AM and go mosh pit it out with a bunch of hillbillies to try and get a 3rd tier LCD TV for $299. Like a Jedi, I get my deals the elegant way. By picking up my lightsaber (notebook) and firing off a request to the PR department for some kind of accommodation. But that's me. You enjoy your 4 AM wake-up and 37-inch Spektor TV deal. However this year I got an e-mail from Polo Ralph Lauren – have you watched the 4D video? You totally should. Even Dana agreed that it was cool – that said the entire store was 30% off plus an additional 20% off your first item purchase.

And clickety checkity, yes! Our store was participating. Now the fine print initially led me to believe that our store was opening at 11 PM. (Upon re-reading it, I can see how there was enough ambiguity to leave room for it not opening until midnight. Grrr!!!) Anyhow, we were already out and about around 10 PM, and Dana wanted to go to Wal-Mart at midnight so the planets were alligned for us to experience the blackest of Fridays. So we drove over to Polo and basicaly killed time until 11. (Dana managed to kill some money as well at the Children's Outlet. 50% off entire store plus some mystical coupon-ing for an extra 20% off purchase.) And we waited. And then at 11:15 two guys showed up and said they didn’t open until midnight. “Your Website said you open at 11.” This slowly escalated – or, probably more accurately "immatured"  – to “Uh-huh!” “Unh-unh!” when ultimately they said, “Well, we were told to open at midnight,” and they strode inside and locked the doors. Blast!

Fortunately, Wal-Mart was all of like 2 miles away so we jumped in the G-ride (actually, our RAV-4, which is decidedly un-G) and headed to the Mart. Which was SICK crowded. So Dana spots her Shark mop, all plastic-wrapped in a giant pallet and yoink! grabs her Shark mop and throws it in the cart. Score! So, while she’s walking around waiting for 12:01 when we can actually buy it, she is flipping through the Wal-Mart flyer, and then, hello-hello! I see the page of movie specials! Over 90 DVD titles at $1.96, over 55 DVDs at $5 and over 60 Blu-rays for $5! 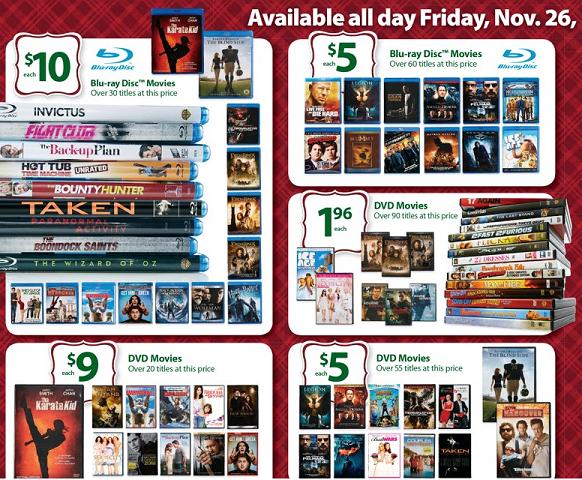 Huzzah! So I high-step it back to the electronic’s section and start looking through the piles of movies...and none of them are marked on sale. Curious. So I walk up to the clerk who, since it is still about 30 minutes until midnight is totally not busy ringing anyone up, and ask where the sale movies are.

“Hi. Where are the movies that are advertised.”

“Yes. The sale movies are in dairy.”

“Dairy is where they keep the milk and cheese and eggs. That’s dairy.”

“Umm. Yeah. I know WHAT dairy is. I just don’t know WHERE dairy is. In this store.” (It actually pains me that this Wal-Mart employee thought -- and probably still thinks -- that I didn't know what dairy was. I'm bruised inside.)

So I head to dairy and it is a mob scene. Have you ever disturbed a Fire Ant mound? First it is a rather peaceful, benign lump of dirt. Then you disturb it and it is an explosion of angry-angry mind-melded all-as-one activity where hundreds of ants instantly materialize out of thin air. That was the movie section. Except with far less biting and I am left with no itchy, pus-filled bumps.

So, I went through and they indeed had a great selection of movies. I’m grabbing titles and agonizing over others. Do I want to buy the LOTR trilogy – again – on Blu-ray for $10 each? No. I already own the 4-disc SE versions of both. Back to the pile. (Next to the DVD versions that were one dollar and ninety-frickin-six cents! Crazy!) Do I want to Live Free or Die Hard? For $5? Mmmm, kinda but...no. Back to the pile. Dark Knight Blu-ray for $5? (Also for $5 on regular DVD if you are an SD chump.) Are you kidding me? Thank goodness I already have it. And paid like $22! Damn! Move on. Then I came to a whole host of James Bond DVDs. Remember a while ago when I wrote about Kaleidescape having a new iPhone camera feature to tell you if you owned a movie or not? Well, I kind of poked fun at it, like, “Really? You can’t even remember what movies you do and don’t own? Douche!”  I used one of our customers and their unhealthy love for all versions Scarlet Pimpernel as an example. Well, here I was looking through the Bond titles, and for the love of Pete, I couldn’t remember which ones I owned! I’d have killed for an iPhone and that app. (Which isn’t saying much. I would kill someone to get an iPhone most days. Life with Lady Phone tends to raise iJealousy to a new plane.) So I’m looking at these Bond titles searching my memory, “Hmm. I like this one. Does that mean I have it or that I wanted to get it. Think, John, think, man!" (Turns out, that like Indy, I chose...wisely.) 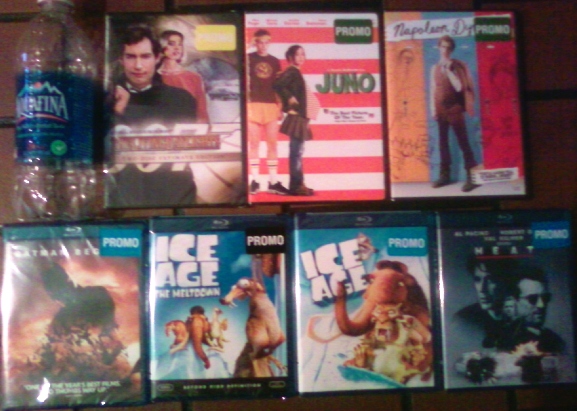 Nice! Oh, Kaleidescape? I’ve got something for you! I had Ice Age 3 DVD in my hand, but it was $14. So, back in the pile. I also had the Bourne Ultimatum DVD in my hand for $1.96 but as I was checking out I noticed it was Full Screen, and Full is one Screen Johnnie can’t play.

Also, did you notice the Aquafina wattle bottle in the picture? It's not just some trash that was randomly lying on the floor. Consider this....

Estimated cost to make Aquafina bottle of water, from the most abundant resource on the entire planet? Probably a nickel. Black Friday price: $1.48. So, you win this round, Wal-Mart!

So after this, I’m pretty psyched about my deal getting awesomeness, so we decide to head back to Polo. Now the outlet is MOBBED. Like, I'm going to the far-away parking spots, and they are Max Payne filled up. So Dana just drops me off and starts heading...somewhere in search of parking. (Lauryn, who previously proclaimed, “I can stay up all night! Yay!” is fast asleep.)

I get to Polo and there is like a 30 person line. To get INTO the store. I finally make it in and notice a line that is reminiscent of summer time Space Mountain at Disney. There are probably 150 people in line. Waiting to check out. On one of the four registers. All shuffling back and forth and angrily clutching their soon-to-be purchases and realizing that it is super late at night and they are neither at home nor out somewhere fun-drinking. They're in line to buy clothes.

Or I could just go home and spare us all the aggravation. So, I’m calling our first Black Friday shopping a relative success. Dana got Shark mop and a shop vac. I got 7 movies. And a water. Lauryn got to stay up past midnight. And we all live to fight shop another day! Love to hear if you scored any major deals. Or the juicy bits like how you wrenched the last $49 Blu-ray player out of some widow’s weak and bony-arthritic clutches. Either way...