Food is on a lot of people’s minds this time of year. Nearly every TV show or commercial or billboard seems to feature some image of a giant, golden, crackly-skinned turkey carcass heaped onto a table overloaded beyond capacity; straining under the weight of fixins enough to feed 20, but consumed by a family of 6. This eats-all-you-can-stands-til-you-can’t-stands-no-more gluttony amnesty has brought us a world where the “Oh my gosh! I can’t believe he’s really gonna do it! The excitement is killing me...I hope it lasts!” incredulity and shock-and-awe excitement of deep frying a 20 pound turkey in an oil-drum no longer holds any charm or mystery. Rather, we have escalated the level of food-horrifyingness to the point that not even going against the laws of nature by transforming our kitchens into nightmare food laboratories and concocting main courses like mutant, hybrid, golden-skinned turkeys with the hidden treasure of being stuffed with a duck which is in turn stuffed with a chicken is considered too shocking. That silent sustained scream you heard was millions of Kosher voices suddenly crying out in terror and were suddenly silenced...

In honor of the against-all-that-is-good-and-sacred, Turducken, I thought I’d share some of the unusual and eye-catching foods that I spotted on my most recent trip to The World Market. Bon appétit!

John McCann. Oat Meal. For men. REAL men. So real it is Two Words. Made from oats, cut from steel. Like the men that eat them. Stop being such a puss, stop yer cryin' and belly-achin', and eat your Oat Meal! Like a man. I don't want to hear about how it is cutting your gums. John McCann is famous for one, and exactly one, quote, "Oat Meal ain't doin' its job if it ain't makin' your mouth bleed a little!" There's iron in that blood, and there's iron in that steel that cuts these oats! Every oat will put a single, coarse-as-steel-wool hair on your chest. Which can then be cut off – with steel – and turned back into more Oat Meal. Steel sharpens steel, and steel cuts John McCann oats. It's the circle of life. If you feel like eating the jolly old Quaker Oats Pilgrim’s goods for all of these years has made you weak and pasty and full of soft, squidgy belly fat, you’re probably right. But don’t fear; John McCann will slap the bitch right off you! His Oat Meal is so wiry, it has to be cut. By fire-hardened, tempered, hammer-sharpened steel. Need fiber? John McCann will burrow its way into your colon and punch the crap out of you. This is the kind of Oat Meal that the *real* pilgrims ate. In fact, you pick up a can of this, and you just became an elder of some Amish community. Butter and brown sugar and half-and-half? What are you, some kind a nature-hatin', non-steel-cut-oats-eatin', flower-in-your-hair-wearin', hippy-commie? John McCann Oat Meal isn’t about flavor. It’s about eatin’. Look, you’ve got a bowl of Oat Meal in front of you RIGHT NOW. Who’s to say what you’ll have in front of you 12 hours from now? So, sit down, shut up, and eat your oats, dammit! And, by God, you had better clean that bowl! Or John McCann will take you out to the woodshed hisself. And you will NOT like what happens out there. John has been out by hisself a long time. And he thinks you got a real purdy mouth.

Sometimes a name is mysterious, like "Potted Meat." Other times it tells you exactly what you're gonna get. Like "Salmon in a Can." And after you’ve worn your teeth down to smoothened, bleeding nubs from mouth-grinding your way through a full bowl of John McCann, you’ll need something soft. Something...Mushy. If there’s anything I love more than regular Peas, its processed peas. Apparently this “process” is to completely emulsify them into, well, mush. And who doesn’t love eating something that is represented by the Nickelodeon’s Green Slime logo?  Sadly, this product is apparently reserved for Batchelors (or bachelors), so I was unable to purchase a can in good conscience. But ladies, I think you just found the perfect meal for your next date!

It’s not too often in polite, genteel society that you can walk up to a woman and confidently ask, “Care to taste my Spotted Dick?” and not expect to be either A) repeatedly and brutally pepper spray attacked in the face or B) hear shouts of, "That's my purse! I don't know you!" imminently followed by multiple Jet Li-style kicks to the crotch. But Heinz has made this opening line not only acceptable, they have actually encouraged it. The yellow label coyly advises that it is microwavable, so now you can enjoy your Dick hot or cold. Really, when it comes to eating Spotted Dick, I think it’s all up to individual preference. I’m a bit conservative in my marketing and labeling. In fact, had I been Heinz, I think I would have led off with the “Sponge Pudding” part, fearing that I might alienate some of the more puritanical amongst us with boldly proclaiming “Spotted Dick” right off the get go. But not Heinz. “Lead with the meat, that’s our slogan!” And, you know, maybe Dick should have a doctor take a look. Spots can be a sign of, you know, *trouble* down below. Also, I believe that it prefers to be called “Spotted Richard.”

Toothpaste comes in a tube. Hemorrhoid ointment comes in a tube (I mean, so I’m told. I wouldn’t know. I’ve seen the commercials, that’s all.) Astronaut food comes in a tube. And now, Wasabi comes in a tube. Good into the year 2012. Instead of buying Tube o Sabi, go to Magic Fingers in Atlanta, Georgia and have them make you some REAL, fresh Wasabi. The Wasabi root is flown in from Japan and then rubbed against a shark skin tableside. Then you’ll mock Wasabi tube too.

Heinz has created a new line of products targeted at those people that are just on the verge of going totally blind, but who don’t want to bother learning Braille or care to give up the freedom of living and shopping alone. With BEANS, your blind loved one will never again blindly grope around in hunger before finally grabbing a can of Mushy or John McCann. With BEANS they will always know what they are getting. Oh, wait... Damn! I didn’t want tomato sauce...

Even though my eyes are reading that it is candy, and that it says Pocky, and that it is a “chocolate covered biscuit stick,” my brain is rejecting this information. Instead all it is seeing it and thinking is, “Rocky, nut-covered pooh stick.” I’m sorry. Go ahead. You can have mine. Pooh stick. It's what's for dessert!

I know what you’re thinking. But you're wrong. And dirty. This is cured Bockwurst. From Meica. Germany’s No. 1 Brand. This is NOT “Not-Spotted Dick.” And I can’t stress this enough: Do NOT carry both items around with you at the same time. Because if you whip this out after asking that high-society lady if she’d care to taste your Spotted Dick, well, you really deserve all the face slapping and Mace-ing you have coming your way. When someone has their taste buds all set for a delicious (?) mouthful of Spotted Dick, this is not what they’re wanting to see. Ever. 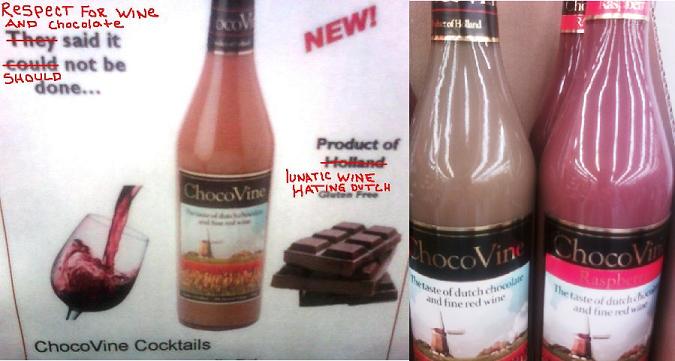 This is just wrong for SO many reasons. Wrong and morally offensive on a way that not even Turducken approaches. Red wine. And chocolate. Yes, they can pair really well together. Religiously well in fact. With red wine. In its glass. And dark chocolate. On its plate. Bite of chocolate, drink of wine. Drink of wine, bite of chocolate. Yin and Yang. Ka and Ka-tet. Master and Padawan. That is the way that nature, God, Napa valley and even the French intended. Oh, but not the Dutch! Those crazy clog-wearing, windmill spinning Dutch! They figured that they could cut out the whole bite and chew middle-man from the tried, tested and true drink-bite-chew-swallow method that has been serving mankind perfectly back since ancient times. And I seriously question the use of the phrase “fine red wine.” I’m guessing “The taste of dutch chocolate and some red wine we found at the bottom of a bottle left behind by some homeless guy outside our factory” doesn’t have the same marketing flair. Hey, Dutch! You know what else shouldn’t be mixed with red wine? Spotted Dick. But if we let you get away with this one, pretty soon you’ll be serving us “fine red” DickVine. And I’ll not stand for it!

This last one is just totally disingenuous, bordering on criminal-level false advertising. The wine on the left is Acacia Pinot Noir. It is delicious. It is delicate and full of right cherry-berry flavors with hints of vanilla and oak. (And not a shaving of dutch chocolate in sight!) The wine on the right is not. Now, the wine on the right might very well be a decent wine, and I have no doubt that it is, in fact, made of the “same juice” but that doesn’t mean it is the same wine. Using that same logic, these "Both tell the same great time..." 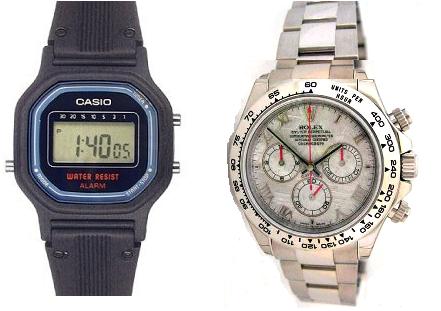 "Both arrive at the same great destination..."

"Both drive down the same roads..." 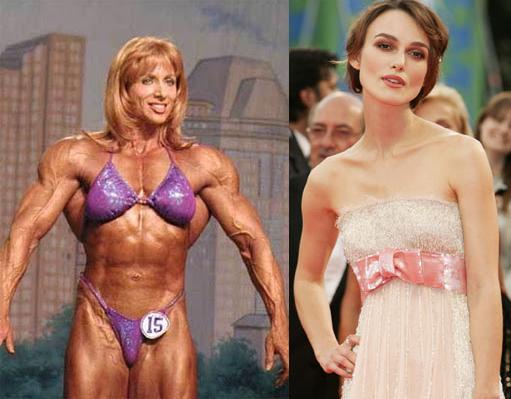 Reply tequila sunrise cocktail
7:11 PM on July 21, 2020
Very interesting blog. Alot of blogs I these days don't really provide anything that I'm interested in, but I'm most definately interested in this one. Just thought that I would post and let you know.
https://www.lolacovington.com/tequila-sunrise-cocktail/