Power Selling Strategy: "This is what I own"

Back before I boarded this leg of Mr. Toad’s Wild Ride and became a custom installer, I was a golf professional. (There is definitely a correlation here beyond just a tra-la-la stroll down memory lane...stick with it!) I worked at a couple of public courses before landing at a very private club in the Bay Area for about five years, and that’s where I learned about the selling power of, “Well, this is what I own...”

You see, when I started at the private club, manufacturer reps – clubs, balls, shoes – would come around and want to put me “on staff.” Being on staff was a totally sweet, pretty much completely one-way relationship, with almost zero commitments kind of deal. I joined the Clevelend Golf (clubs), Titleist (balls) and Foot-Joy (shoes) staff that basically meant that I got all of my gear for free. Two sets of graphite shafted clubs with every angle of wedge in their inventory, multiple bags and shirts and hats from Cleveland. “Accidentally” break a driver in a fit of rage when knocking two drives out of bounds on the 18th hole and blowing a par round? No problem. We’ll send you a new one. Two dozen Pro-V balls a month. Monogrammed with my initials. And two pair of shoes a year. All free. Yes, totally sweet I know. 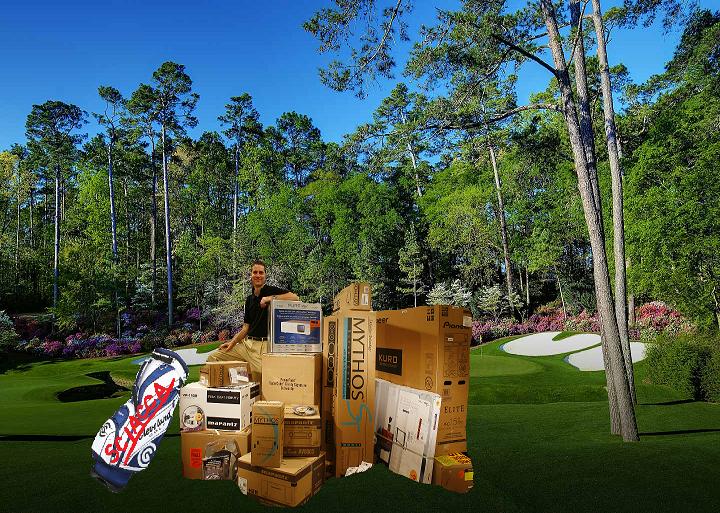 But the subtle, guerilla selling strategy was that when I would be out on the course, shooting near scratch (I was a .5, and believe me, that last .5 is the hardest .5 to overcome) round that the members would be so impressed with my playing and think, “Hmm... If John is playing so good with those clubs and balls then maybe I wouldn’t suck so bad if I had the same things. I should find out what sort of equipment he’s using...”

Sometimes it wouldn’t even be on the course; it might be in the Pro Shoppe or the Grille Room. I’d be diddling around (this was long before the days of blogging and actually before the high-speed Internets, so I was probably folding shirts, calligraphy-ing something for a tournament or upstairs making myself a latte on the commercial Faema Due cappuccino machine) and a member would inevitably walk up to me and say, “So, John. Tell me. What sort of equipment do you use?”

“Well, Dr. So-and-so, I use Cleveland clubs. I really love their wedges. They give me terrific control around the greens. And Titleist Pro-V balls. They have great feel and action on the greens but still plenty of distance off the tee.”

“Hmmm. That’s interesting. I’ve been having trouble with my short game. Do you think those things would help me?”

“Oh, absolutely! They’re terrific. I mean, they’re not magic, but if you put a good swing on them, they’ll really come through for you. I’ve got a demo set that you can take out and try if you like.”

“Well, that sounds smashing! Let’s share a single malt to celebrate! Bar man! Your oldest, finest scotch! Two fingers, for us both. And be quick about it!” (This last part might not have happened. Like ever.)

This was a terrific sales strategy, because it was honest. Granted, I got the clubs for free, but I could have had any clubs (or balls or shoes, or whatever) for free. So I was giving the equipment the ultimate endorsement by actually using it myself. I wasn’t saying, “This is great for you, but, well, not so great for me. I need something better, cause, well, I’m better.” I was saying, “This is so great that I’m playing it and I think you should too. And if it works for a player of my caliber, it should definitely help a player of yours as well.”

And the same thing is just as powerful and effective as a sales tool today. Continue reading this story over at Resi Systems and see how I have harnessed the power of  "What I own" for selling audio/video gear.