When we last left off on the exciting serial drama which is my latest system upgrade, I was waiting for the imminent arrival of the new Kaleidescape Disc Vault. You’ll recall that I removed my Marantz pre-amp/processor (which has since been sold on Audiogon! To a guy that says he met me at CES one year. When I was walking out of a Martin Logan speaker demo. Which he says I said I enjoyed. So, I must say, it all seems to add up...) and replaced it with the new AV7005 model. I removed my Sony 400-disc DVD changer and Escient and replaced them with the two Kaleidescape pieces, server and player, leaving a gaping hole for said Disc Vault. And I installed the Lutron RA2 processor and attempted some Lutron switch replacement only to discover a secret-not-so-secretly-hidden random extra light switch in my bathroom that forestalled the switch replacement. (Spoiler: The new remote dimmer arrived. Oh, yes, Lauryn’s bathroom! You *will* be automated! Ohhh...you will be!) And then I reprogrammed my URC MX-980 and MSC-400 processor to tie it all together. Yes, a pleasant entire weekend, to be sure.

So, the Disc Vault arrived the other day and I’ve actually already completed my review for Jeremy at Resi. Besides the nuts-and-bolts of the actual hardware review – which I’m sure you’ll all be sitting around on pins and needles until it comes out – I thought I’d share some thoughts on *living* with the Disc Vault; what it is, what it does, and how it makes movie watching 100-times more awesome. (Actual numeric value of awesomeness figured by a complex formula that involved several sine and cosine and tangential calculations which can ultimately be boiled down to multiplying awesome times number of discs vault holds.)

OK, the Disc Vault. What is it? The Vault is a black, plasticky shell of a unit that is made by another company – you can likely guess that company is DACAL based on the giant branding of their name on the front of the unit – that holds 100 Blu-ray discs. When you first see the unit, you think that it will have some heft to it. Then you pick it up and wonder if instead Kaleidescape sent you a dummy mock-up shell only with no guts because the thing weighs next to nothing. I think that size to weight ratio, this is the lightest component I have EVER held. Like, a big roll of bubble wrap weighs more. Anyhow, the Disc Vault lives to hold your discs. 100 of them. It connects via a USB cable to a Kaleidescape M-class (ie: new Blu-ray capable) player, and to power. And that’s it. You feed a Blu-ray disc into it, it rotates the tray to a new slot, you feed another disc into it, you repeat until you have no more discs to load or you reach 100.

The Disc Vault. Why is it? Well, I don’t want to try and speak for Kaleidescape and their legal team here (though I would love to be able to BILL like Kaleidescape’s legal team! One of the members that I became friends with at Orinda Country Club, Richy-Rich D, was a patent infringement attorney. He sued Sega – and won! – for over $90 million. That enabled him to do cool things like buy Bentleys and Hummers and Carrera 4 GTs, and original Warhols, etc.), but the Disc Vault is a way to insure that the Blu-ray disc is actually in your possession. You can’t rent a disc, rip – sorry, Cheena! I meant to IMPORT – the disc, and continue enjoying the disc. No disc in vault (or in a player’s drive somewhere on the Kaleidescape system) no movie watchey. Does this suck? Meh... Kind of, I guess. The Vault adds $1500 to the price of a Kaleidescape system, so that is kind of ouchey. I’m sure that if you asked anyone out there, “You have a choice between spending $1500 on this component OR, say, spending $1500 on just pounds and pounds and POUNDS of Gummi candies, what would you buy?” you would see a huge increase in Cola bottle sales. Well, at least for me. Also it is a fairly big component (5U in rack space lingo), so would it be better if you didn’t need it? Yes. Absolutely. No one is going to be like, “Wow! Awesome! I need a Disc Vault! That is SO SWEET!” (Well, the people at DACAL will probably be like that. In fact, they probably sent one of those giant, fruits and nuts and chocolates gift “Thank you!” baskets over to the evil unholy hate-the-movie-loving-public people over at the Blu-ray Disc Association.) Once you get over “why Disc Vault” and accept “yes, Disc Vault” your life will be so much more pleasant and that burning, unsettled agita that you’ve been carrying around in your heart-region will just slowly dissolve away.

The Disc Vault. How is it? So, the meat of the matter, how does it work? You load your discs in, the Vault identifies them, tells you if you have done something retarded like load in a non-Blu-ray disc (el Vaulto no likey the DVD nor the CD nor PS3 games nor any other round, shiny disc that isn’t specially a Blu-ray movie in nature; it tells you the error of your ways, then spits the disc out Linda Blair-style, though with considerably less pea soup to clean up afterwards), then imports them. The process is totally automated, which is wicked-awesome-nice since Blu-ray movies are none too speedy about importing -- lets just see how fast YOU can shuttle 40 Gigabytes worth of data from one thing to another, umm, thing -- and you can go to bed and wake up knowing that you’ll add like five more moves to your collection. And go to work and add another five. Etc. Once your movies have finished importing, the Vault is absolutely, utterly silent. It just sits there. Like a silent, glaring blue-eyed guardian, stoically holding your Blu-rays. (Oh, yes. Its undefeatable display shows – in BRIGHT BLUE – the next disc slot number to load. Mine has been saying 25 for the past  week or so. I taped a piece of black paper over it which has helped to greatly reduce the quantity of scary, blue number 25 nightmares I’d been having.) You select a movie, and it starts. Mine start in about 10 seconds, other people see times closer to 5. Other people also have better, more optimized networking gear, so if I replaced my $60 Netgear Gigabit switch with something say more Cisco-ey or enterprisey, I probably would be turning some sub 10-second start times as well.  (Thus the Sciacca spending conundrum. I like to think of those extra 4 seconds as a time for me to reflect on all of the beauty of...Oh, look! The movie is starting! Quiet down, brain!) This is a large image that sums up what the Disc Vault has meant for me. On the left: My unruly stack of movies. On the right, my import screen. In the center, I give you....THE VAULT! Which brings the two together in a sweet-sweet movie love-watching "special mommy-daddy private time hug." 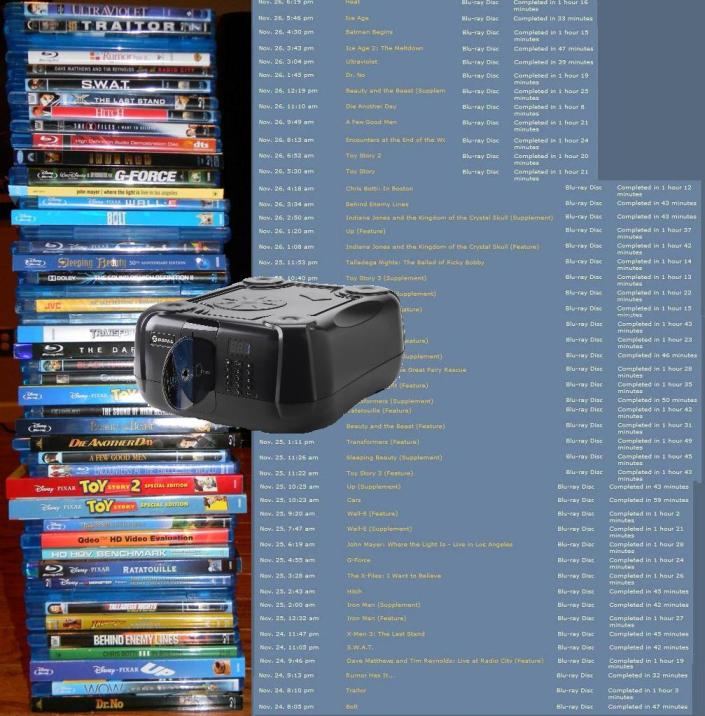 So, what have I noticed about living with the last puzzle piece to the Kaleidescape Blu-ray experience? A few things. First, my life before the Vault involved a haphazard, mishmash stack of Blu-ray discs under my pool table. (See Exhibit A, above.) Watching a movie meant pulling out these stacks and sifting through the titles and finding the movie we wanted and then carefully sliding the remaining discs back under the table. Many times, Lauryn would want to watch something that we only had on Blu-ray, but it was so cumbersome for Dana to get the disc out to play it that she would end up just being forced to watch something else. I know, it breaks my heart too. That kind of mistreatment – not letting your 4 year old watch her preferred 1080p movie format – borders on neglect and abuse.

I also found that about 20% of my movies were still in their plastic wrapping. That’s right, I’d bought (OK, let’s be honest, I was probably *given* a lot of these titles, usually at the awesome DEG – Digital Entertainment Group – dinner at CES where they give you a duffle bag FULL of movies as your giveaway. Oh yes! It is like 72% of the reason why I miss going to CES.) several movies that we had never even watched. Ditto for any second discs full of special features. So liberating my titles from under the table to one super easy to access location has been a giant lifestyle improvement.

Are we watching more Blu-ray content now? Absolutely. Especially Lauryn who has mastered the Kid’s Remote and her Movie Collection and who can watch Toy Story 3 over and over and over until she decides that she wants to stop it and watch a little bit of Ice Age before deciding that, no, she actually DOES want to watch Toy Story 3 again. Also, we had some people over the other night and for demo’ing your system, the Blu-ray experience is now so way MUCH better. They had never seen my theater, so we watched Toy Story 3. (I have already WAY gotten my money worth out of that disc purchase, thank you.) Then we watched some Dave Matthews in concert. Then a clip from Iron Man, which is always great for an anamorphic lens, 2.35:1 "Wow! That's awesome!" Then a clip from Bolt. Then a John Mayer/Chris Botti clip. Being able to instantly whip your hair back and forth (whip your hair back and forth, whip your hair back and forth, whip your hair back and forth) – whoa! Sorry. Guess that’s still in my head, like that Star Trek II Wrath of Kahn ear thing. Being able to instantly whip through your movie collection is SO awesome that you will enjoy it more; whether it's for yourself, your family or your guests. And for movie lovers/collectors, there is still no better vehicle to drive you off to that land of video bliss and enchantment like a Kaleidescape. Plus, the price of that vehicle just got drastically reduced to sub-$5000.  So, what can I do to put you in a Kaleidescape...today?