I feel a tad grieved in spirit and soul that I have been remiss in posting any updates recently. But the winds of change have been blowing here at Custom Theater; blowing away those sweet, orange-cinnamon-smelling, tropical island spiced winds of John having little to nothing to do, just slowly swaying in a hammock and singing, “Underneath the mango tree, me honey and me make boolooloop soon.” Instead, the currents have changed and with them they have brought in a new set of breezes; a musky, sour, sweaty and angry-angry Santa Anna of John being overwhelmed with far too much to do.

I wanted to do a post about my day yesterday, but the day just kept snowballing into this giant rolling, sadness ball that plummeted down the soul-hill gathering growing chunks of depression, despair and malaise. It seemed like it was headed for a swell enough start; I had a meeting planned with a builder to go over a new job. But I have been fighting a cold, coughing up these disquieting, morning mouthful globs of something; the color of which does not declare it to be good or healthy, though the texture appears to be adequate for sealing any pinholes on high-pressure gas lines. So, prepared for my meeting, I step out of the door and immediately realize that I am underdressed for the 35 degree weather. Instead of heading back in for gloves and scarf and a bonus jacket, I press on. I arrive at the jobsite at 10:15, squarely in the middle of the “between 10 and 10:30” window we set and find that, alas, the builder and client are not there. No worries. I wait. Trying to dodge the cold and endure the phenomena that it can actually be colder and windier inside of a half-built, concrete-walled home than just standing out in the cruel, open elements. So 10:30 comes and I’m still alone. Then 10:45. And there is this bitter-bitter arctic wind that is just whipping through the job site, chapping lips and cracking skin as it blows through with white-haired spite. So I go and sit in my car until nearly 11:00 when they finally arrive.

So, I’m pretty stoked for this meeting. Another biggie-big house (though, I would be happy for a truly epic Biggie Smalls project, even posthumously) that has a dedicated media room. Except, grrr...! The builder has scheduled the meeting for the client and me AND another A/V contractor...at the SAME time! Sweet! Sweet like sweetbreads are neither “sweet” nor “bread.” (They are “the edible glands” of an animal; thymus, throat, pancreas, stomach, heart. You know, the sweetbreads parts.) Now, if this were to be a Jeopardy style battle of the minds and knowledge where the bestest and smartestest wins, man, I’m all for it. I’m absolutely, 100% surely, grade-A squared away in my knowledge of this industry and the systems our company can provide. But when tact and decorum come into play and comments like, “Really? You’re even letting this guy in your house? You know he sells things that are really meant for 1,000 square foot tract homes, not multi-million dollar, waterfront mini-mansions, right?” aren’t in proper form, that is not the Sciacca strong suit. Also, the other installer – and I know this is kind of mean to even say, but, well, I’ve promised you honest, so you’ve already checked your morality at the door – one of the other installer’s front teeth is like solid silver. Which, granted, has nothing to do with anything, but, well, my teeth – now, again, this is just my opinion – but my silver-free teeth say, “Yeah, umm, we really belong on this kind of project.”

And, honestly, the other company is not bad. They are a security and central vac company that does audio. And they fully admit that they do lower end audio systems. We are an audio and automation company that does security and central vac, and there is a big difference in those semantics. I’m asking technical questions like how they want to integrate their cameras into the video distribution and how many zones of audio they want, and how they want to control the system and he is asking what kind of central vac ports they want. It’s, uh, a, uh, cultural difference between our, uh philosophical approaches to the, uh, design, and, uh, integration ideas, of, uh... Oh, who am I kidding?! I pwn this guy! But, my pwn-ing comes with a price; my systems, they are the more expensive-er.

Seriously, part of the problem about doing what we – OK, doing what I – do is that our company can really do ANYTHING in the techie world. Lighting control? HVAC control? Security? Pool control? Audio/video distribution? Paging? All that stuff and more. So, when someone says, “What is it your company does?” or when you ask someone, “Tell me about what you’d like to do in the home?” it is such a giant open, blank slate that I fear that sometimes I begin to overwhelm people. This job is a continual learning process, trying to hone and refine sales strategies and techniques and find the best way to connect with and excite people. So I look at this one wall and see like 12 light switches in multiple 3 and 4 gang boxes within about 10 feet of each other. I start describing automated lighting and cleaning up switches and how automation like remote access and thermostat control works and he is looking at me like I have just offered to have sex with his wife while he films it. Interest in automation and remote access: Zero.

So, I’m gonna share a Sciacca-trick with you. I try to find a way to relate to potential customers. What can we talk about where there is common ground? Can we discuss movies? Are you into wines? Do you like cars? Are you wearing a watch I can make some poignant comment on? Whatever. I’m looking for little clueseys, like Holmes. So, this guy is giving off mega ex-Special Forces vibes. First, he has “the look.” Second he is really amped about security talking about things like “standoff points” and “barricading locations” and “grabbing my gun” and whatnot. Where others would hear crazy paranoia, Sciacca is hearing Spec Op talk. And me likey.Third, Spec Ops guys have this kind of jumpiness to them. When someone new walks into the room, they pay attention. When a door opens, they look. They are always observing stuff. My cousin calls it Condition Yellow. I know, you’re thinking I’m making this up, but these are things the Sciacca notices. Fourth, he has a gold ring which says “HALO” on it, which, unless he is way-WAY into videogaming – and, spoiler, he isn’t -- I’m taking to mean “High-Altitude, Low-Open,” a Spec Op parachute insertion term. (See! All those years of reading Tom Clancy and pouring over Discovery Channel military shows Hell Week and BUD/S has not been time totally wasted!)

And, I’m not gonna lie; I want this job. This is the same builder from the “Who Salted My Game?” post, and I ended up losing that job (oh, and, PS: I lost it to this A/V contractor; his A/V quote was like $17k to my $35k, so you can see why I’m a shade jumpy here) and I don’t want to lose another. Two in a row is not a streak I’m looking to start. So near the end of the meet I’m reaching for some kind of connection here, so I say, “Are you an ex-Teams guy?” This is a really non-invasive way of saying, “Hey, I have pegged you as an Operator. I know about Operators. Let’s do this thing!” So, he says yes, and I try to further cement a bond by saying, “My cousin was on 7.” Now, you wouldn’t know what that meant. But an Operator would. And he did. He was an ex-Green Beret, but seemed to have no interest in talking or sharing or bonding or getting all Robin Sage over it. So I’m trying to get SOME kind of guidance on where to bring my proposal in at. I have more than one audio system in my toolkit, and I don’t want to break out $35k again if this is a job calling for a $17k bludgeoning tool. So I ask – for like the third time – “I know that you don’t really have a budget for the A/V system, but could we kind of take it by room; like how much are you thinking about the media room?”

That’s when he hits me with this soul-destroying, totally demoralizing comment. “I know that I can get an outstanding projector for $600. Like, outstanding.”

Now, many of my projectors would have sales tax charge of like $600. So I say, “Well, a lot of those lower priced business projectors really aren’t optimized for home theater viewing. They are more about high brightness, and for producing images that are more meant for static things like Power Point.”

“No. These are for video and they are outstanding. People that spend $10,000 for a projector just have too much damn money.”

So, with that bit of pleasantness, I am well and truly freezing and dejected. I’ve spent about 2 hours in a meeting at a cold and windy jobsite to culminate in the guy telling me his expectation is for his dedicated, tiered-seating media room to be built around a projector that costs less than my remote control. Ass. Punch!

So I jump in my car and start back for the 45 minute car ride to our store. On the way, I swing into the bank to try and cash the second check for my Marantz pre-pro that I sold on Audiogon. After about 15 minutes of trying, and two forms of ID, and a thumbprint, the teller tells me that it looks like there aren’t enough funds in the account. Great. (Turns out there WAS money in the account, but the teller inadvertently "cashed" the check, saw there wasn't an extra $780 to cash it again, said it was NSF then voided the transaction, re-depositing the check.)

I finally make it back to the store and feel like I’m jumping into Grade V rapids with all that is going on and the piles of messages and things waiting for me.  And I just feel like undoing my lifevest and sinking into the current. I’m depressed. I’m bummed. It’s freezing and I feel like I’ve lost another job. So, when a truck pulls up to deliver 5 chairs, and I go to help unload them, and I hear a tinkling crash on the ground and look down to see the shattered glass lens of my Revo sunglasses, I knew this day was well and truly crap.

A picture is worth a thousand words. And this picture thoroughly sums up my Monday. 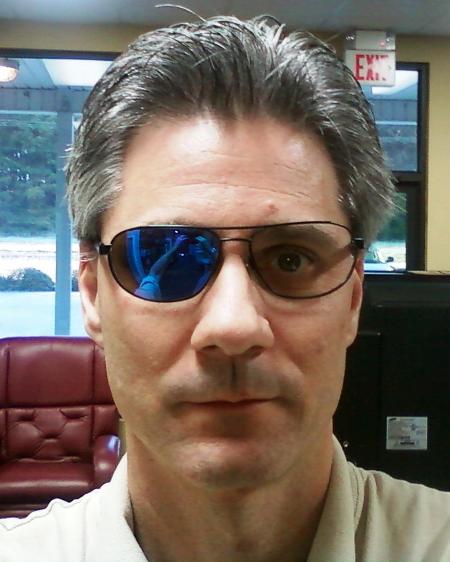