First, I would have to say that, yes, I agree. I AM indeed awesome.

So when I open my e-mail in-box this morning, I see this little nugget:

Now before we get into the awesomeness which is me, I’d like to point out a couple of other messages for me this morning. The first message never – and I mean NEVER – fails to give me a giggle. The woman’s name is Susan, but her e-mail has the rather unfortunate contraction of, well, you see it. Sometimes I’ll just text Jeremy G “Shart” and then minutes later he’ll text back “he-he.” Childish? Perhaps. Reducing my awesomeness by even a single micron? Impossible! Knowing that sometime, at some point, somewhere she has had to say to some one, "Yes! I know! My e-mail is SHART!!!" Priceless.

Then a message from Darryl. Yes the Darryl W. Darryl has been out of touch for some time – due to a sickness says he, due to some kind of enforced community service thinks I. But now he is back to touching me. These touches feel like someone is gently but insistently poking you, alternating between lit cigars and running belt sanders. This message was asking if I thought he should go and listen to the new Olive music server at the Bellagio at the CES convention. I told him that he could stand in a long cab line, enduring unrecoverable abuse to his fragile ego as no one recognized him, where he slowly works his way to the front of the line to get into the back seat of a cab smelling of sweat and desperation and then inch his way in traffic over to the Bellagio where the Olive people are likely to say, "Oh. They sent you. Well, hmmm. Well, OK, I guess we'll just try and keep up stiff upper lip and make the best of it and all that. Don't take the good seat in case a better journalist like Sciacca comes along -- Yes. We know. He said he isn't coming. But we hold this seat in reserve for him in case something happens and he does show up. Look, don't act like you haven't been told that before, Darryl. You better than anyone should know how awesome Mr. Sciacca is. Now, here, have some room temperature water in plastic cup." OR he could come to Myrtle Beach and sit in my living room on my comfy couch with a glass of fine aged port and compare the Olive to the Sooloos to the Kaleidescape to the Qsonix while my brown-skinned, humble man-servant, Pepe, quietly serves us freshly sliced fruits and well mottled mint and performs healing neck massages on us both simultaneously. Pepe is mute and is content to work all manner of menial chores around my compound in exchange for brightly colored, gaudy, velvet buttons that he sews onto his work jacket in an attempt to shield himself from ocean breezes that only he can feel. I found Pepe wandering the streets of Myrtle Beach selling a sad bag of oranges with tears caked to his dusty face; after a sad turn of events with a fishing captain, Pepe was forced to leave his family behind in the slow-mornings and hot suns of Guatemala, where his underaged children are forced to live in a cruel juxtaposition of modern and ancient, wealth and poverty, beauty and terrible ugliness. His boys, Raul and LIttle Pepe, are made to speak Kachikel and sell gewgaws and simple, eerily phallic wood carvings to unsophisticated travelers on the streets trying to earn enough money to one day buy their freedom from the shallow, flabby land baron that tries to berate them into a more civilized lifestyle. He communicates with these strong-willed boys only in shouts and finger gestures and speaks in long, pompous tirades that Pepe has assured me would make you long for the death that does not come. (Sadly, I have neither a brown-skinned man-servant nor delicious fruits, though he seems so real to me, I feel I can almost dream him to be. Alas, I DO have some awesome audio.)

Darryl responded to my message with a taunt about how audio manufacturers were wasting their time and shipping moneys by sending me gear to review since I – wait, how did he put it? Oh, yes. Like this: ”I’m saddened by the fact that the manufacturers would waste such good equipment on such poor ears. I’ll talk to them at CES to rectify the situation.” So, good to see you’re feeling up to your old self, Darryl!

The last message is from another A/V editor, Chris Chiarella in case you couldn't ponder it out for yourself, who wants to Link-In with me. I accepted his offer, and then told him a requisite to joining the Sciacca Chain is to endure the shame and humiliation which is being invited to read and join the blog.

So, back to me and being awesome. So I’m not sure who this Penny person is or exactly what her Secret may be. But she clearly knows that I Are Awesome, so Microsoft Security Essentials be-damned! I’m opening this message toot sweet! So I do and I see this:

Now, most people would be scared to click a blind link. But, the images speak for themselves, and I am dying to hear what they are saying. I’m guessing that they are going to tell me that, yes, I am indeed as awesome as Penny thinks I am. Plus, bonus! I’m also amazing! And, by God I DO want to treat myself to something special. It’s like this Penny has opened up port-forwarding in the router leading straight into my Limbic System! So, fearless – and on my computer at work, where everything of value is data-vaulted in India somewhere – I click on to see my images. And I get this: 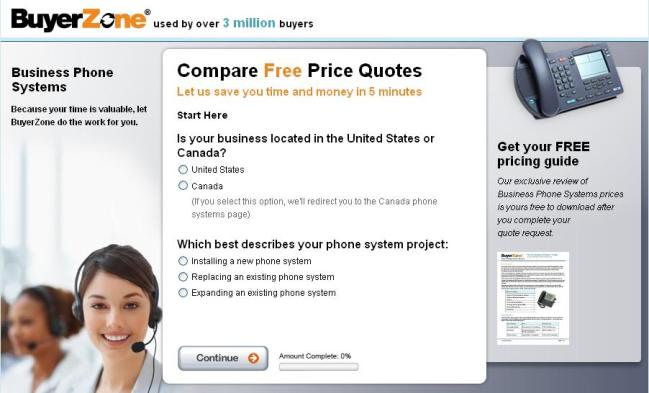 Now, granted, that girl is really cute and conforms to the Sciacca ideal – dark-haired, thin, pale skinned, owns all her own teeth; basically a less-dead version of Corpse Bride – and looks like she would fit right in with the beautiful babies over at MCM Electronics. But, look as I might, there is not one more thing to further confirm my awesomeness. And there is no selection for “My current phone system sucks all the awesome out of the room.” So, you may have one this round, BuyerZone, but you’ll have to do better to get me ne... Hey! Wait just one sweet second! What is that? A new e-mail. [email protected] says I’m awesome?! Tally-ho!