Discovering a slice of The Sciacca history

Today finds me in Alabama, staying with Dana’s sister’s family as we await funeral arrangements for Dana’s uncle, who sadly passed away suddenly and unexpectedly on Sunday.

So, we’re here and the weather has been an awful, snowy nightmare. The weather has been hovering in the upper 20s/lower 30s and they got about a foot of snow and ice and frozen rain that all came down in a horrible “Welcome to Alabama!” display of nature’s cold-cold fury. I knew it was going to be on the south side of warm when we left, but I packed for cold, not for end-of-times blizzard-cold. Plus, it’s not exactly like the Sciacca wardrobe is replete with heavy winter wear. When you have spent your life growing up in California – and outside of San Francisco, not the coldy-cold parts of California – and then living by the beach, your “winter wardrobe” is really more meant for playing golf in blustery, 40-degree temps. And the whole time we were driving here, the weather kept saying all Gandalf-to-Balrog, “Thou...shall...NOT...PASS!!!” with each additional mile, threatening to strand us or throw us into a Goose and Mav ditch-crashing, flat spin. . All I could think about was those cars that got stuck for a couple of days on the interstate when I was in Buffalo a while ago. (I’ll be honest; I am baffled over the fact that Chile is able to get a bunch of people out of a mine-hole thousands of feet into the center of the earth while the US can’t get people out of their cars on an Interstate in the middle of the country.)

So in lieu of these conditions, we have been pretty much housebound. On the downside, Keely (Dana’s sister) and Miah (her husband, who was actually a friend of mine before they got married and who happens to be the brother of Travis who you’ll recall from this post) don’t have cable. Not like they don’t have HD cable or they don’t have the digital tier or they don’t have cable they have satellite. They don’t have cable as in, they do NOT have cable TV. As in there is nothing on channel 2. Or 3. Or 4. Or anything on any of the channels. I’d like to say that I’ve taken this time away from boob-toobery to become more enlightened, to perform some real soul searching and make some deep, meaningful personal discoveries. But no. I haven’t evolved and matured nearly that much. On the plus side, they have “high-speed Internet.” Though I would say it is more technically accurate to call it not-slow-speed Internet. It’s not dial-up, but there is a lot of buffering. So I ran a speed test. And these were the results: 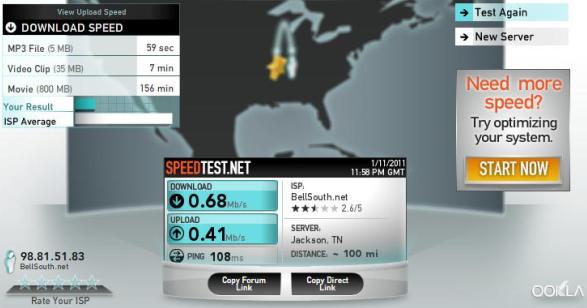 But as they say, beggars can’t be choosers, and I’ll definitely take slow Internet over NO Internet. They also have a DVD player and 35-inch TV. And that has meant some movie watching. So, yesterday, during the snow-in, Miah asked me if I wanted to get a movie. And I had to give him the “hem-haw, well, uh, you see” speech about John and watching movies at people’s houses. The truth is, I’m so infatuated…you know what. Scratch that. I’m not infatuated. That’s a weak, fleeting emotion. I’m so massively, long-term, committed relationship in love with my home theater system, that I have a *really* hard time going over to other people’s homes to watch a movie. When I know that I’ve got a 115-inch 2.35:1 widescreen, 7.1 channel, high-def experience waiting for me, it is impossible for me to enjoy a movie at someone else’s home. I know, I’m a home theater snob. (If you’re curious about whether you might be a theater snob or things that make you one, read this post. It’s funny. But, you know, I’m biased.)

So I start explaining this to Miah, and I start out with, “Well, you know, Miah, I’m kind of weird about watching movies at other people’s houses...”

And that made me think this thought: Family loves you because they have to. Friends love you because they want to. It’s a very powerful difference. And very liberating. And it draws you closer to your friends.

So we work out that first run films are definitely off the table and start going through his collection of movies, pulling titles that we’d both be interested in seeing again. Simpson’s Movie, Talladega Nights, Spy Games, etc. And Miah’s dad bought him this 30-disc Clint Eastwood movie collection that was filled with a ton of movies that either of us would see. (More on this later...) So we finally boiled it down to Public Enemies , the Johnnie Depp as John Dillinger, Michael Mann film which I’d never seen and always wanted to. So, before we started watching I told Miah that I’d give his system a quick check out. You know, just to make sure that his system was being all it could be. (I know. It’s a disease. But I can’t help it. It’s like this mania where instead of constantly washing my hands or saying, “I’m locking the door, I’m locking the door, I’m locking the door,” I have to check people’s home theater systems before watching a movie. It’s my cross to bear. And if this prevents you from inviting me over to your home to watch a movie, well, I fully understand. Plus, there’s always the high-high likelihood that I wouldn’t want to come over and watch a movie at your house in the first place. You know, the snobbery.) So I whip his receiver around and start checking things out. Immediately I saw these wrong-ities: Digital connection from DVD player = No. Surround speakers connected to Speakers B. So I start rewiring things, checking speaker polarities, assigning the digital input, adjusting channel levels, etc. Then I realize, “Hey! Wait just one hot minute. These speakers! They look familiar...”

And that’s when it hits me. This! I know these speakers! This is the JBL Movies and Music speaker system that actually GOT me into this whole, crazy home theater madness to begin with! Holy full circle, Batman! 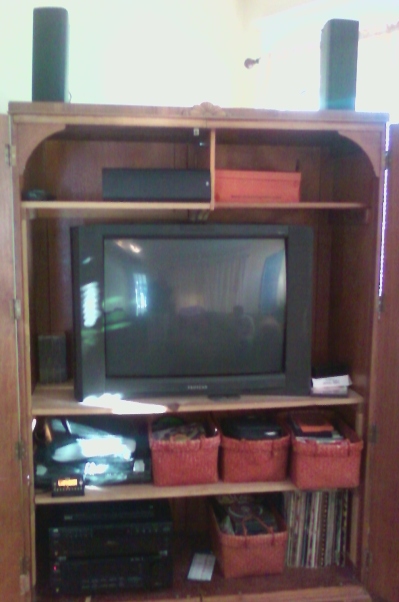 Years ago, way, way-way back years ago, like I’m thinking 1993-94-ish, Travis’ dad purchased this system. Home theater had been around for a little bit – I’m thinking we were pretty deep into the Pro-Logic days by this point, and well past the initial 3 channel-ness (front left, front right, surround) of Dolby Surround – and I hadn’t had any experience with it. And then Trav invited me over to see a movie. I, in turn, invited my friend, Pierre, to come along and to bring his dad’s laser disc player. And his laser disc of Speed. So this system and the LD of Speed were the introduction to home theater that so blew me away – elevator cables cling-clanging behind me, buses speeding out of control all around the room, explosions explosion-ing – that I knew I HAD to have a home theater system of my own. Prior to watching this movie, growing up in a home where 32-inch is considered “big screen,” I had no idea that you could have any kind of experience like this in your own house. And it was like that first sweet, burny, metal-ey taste of meth; I’d had it and I was hooked and I wanted more. So I started doing the mega-level research that ultimately led me to the path that ended up with me turning into an A/V journalist and quitting the golf business and becoming a custom installer.

Reply T~Law
12:44 AM on January 13, 2011
That's awesome! How ironic we spoke today as well. I remember that laser disc player and Apocalypse Now on the OG 61"r. Yeah, I don't know how you do it at Miah's with out TV. When did Miah go from dial up to not slow speed?? There's hope for cable yet. Nice talking to you today.