I think we are genetically hardwired to react strongly to certain things. For instance, it is virtually impossible for any city dweller to travel to any elevation 25% or more greater than what they are accustomed and then not make several broad and all encompassing statements and rhetorical solicitations akin to, “Man! The air up here! Right? Do you smell that air?” Also, you can be in the deepest, most wonderful REM sleep, dreaming of sailing down chocolate rivers aboard the Wonkatania, and you’ll instantly wake up – and be starving – if you catch even the slightest whiff of bacon. (I guess I should clarify that to say “bacon cooking,” as raw bacon smell might wake you up in an angry, feral state where you feel like tearing off your garments and aggressively taking your woman in a manner most ungentlemanly.) The tinkling of ice cubes rattling around in a liquor-filled glass brings on the urge to get up and sing with Frank and Dean-o, holding court with a tumbler filled with golden-amber colored freedom. And, when the brown truck (or, I’ll allow the white truck as well; I’ve no beef with Fed-Ex here) rolls into your driveway, the giddy-giddy excitement of breaking out into choruses of “The package man! The package man! Oh, God! He's coming!"

Yesterday the package man made a stop at the Sciacca house. (I guess it was technically a stop; I'm not sure that his truck even stopped rolling and he doorbell ditched me so fast, I can’t actually confirm there was a package man or not.)  And in his glorious wake, he left behind a tall, brown box. And in that brown box, a white box. And in that white box, this:

I finally received my long awaited Audyssey MultEQ Pro Calibration Kit! Now, I’m sure that this is met with some gratuitous eye-rolling, and “Oh, brother!”ing and possibly even some of you are sliding your mouse up, up, creeping towards that tempting red X at this very moment, but I’d like to tell you why this is cool and why I’m excited. Now, I’ll grant you that this is not going to be met with the same fanfare as coming home to find three stacked Kaleidescape components sitting on your porch, or finding out that the guy is walking up to your door with a new Meridian-Sooloos or that your new pre-pro has arrived. But, it is exciting none the less, because I’m hoping that this kit is going to help to make all of those things sound their very best.

I’ve been a believer in Audyssey for a while. First, it has greatly reduced the amount of set up time involved in installing a new receiver. No more measuring tools from the home theater Jurassic age; be gone you no longer necessary tape measure and handheld Radio Shack SPL meter! Banished to the bottom of the toolbag, with you! (But, still there, ready to go all analog in a digital world JUST in case...) What Audyssey does instead is use a microphone and a serious of whap-whap-whap! test tones to set up, measure and calibrate your listening room. But beyond just the basic – and essential – speaker size/crossover, speaker distance/delay, channel level stuff Audyssey actually listens to the signal, measures it against a known ideal and then using some powerful DSP, makes adjustments to optimize the sound quality in your room.

In my experience, Audyssey almost always results in tighter, more defined and less flabby bass. And, must like when describing a woman’s body, when the options are described with synonyms like “tighter,” “more defined,” “sexy-sexy, daddy like!” on the one hand and “flabby,” “boomy,” “bloated,” “makes me consider my hetero-ness” you can tell which is the preferred.  (Now if you’re into boomy and bloated ladies, hey, that’s cool. To each his own, right brother? But with audio, you’ll just have to take my word that boomy and bloated aren’t good.) Also, sounds seem to stand out in a more defined space; dialog is often easier to understand; surround effects more pinpoint and localizable. Certainly, Audyssey’s impact varies by room, and if your room – and speaker positioning, and speaker interaction with your room – is already perfect to begin with (spoiler: it isn’t. No, I haven't seen your room. I just know. It's a Jedi thing.) then Audyssey won’t have as big of an impact. But I have found that it will almost always improve your sound to some degree.

So, me like-a-the-Audyssey. But, most Audyssey installs are performed with a really cheapo, generic microphone that comes with the receiver. I give you, the cheapo that came with my new Marantz. Behold! 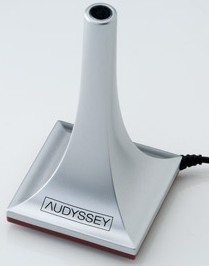 Sure, it kind of resembles one of those weird, European electronic cigarettes. But I can assure you, this delivers no mouthfulls of nicotine flavor or simulated puffs of water mist vapor. Plug it in, run some test tones, repeat at different positions, confirm and store the results. Works great, why mess with a winner. Right?

Well, what if you could make the winner even more winner-ey. Like, say you take Audyssey to the gym, let it work out with the Creed for a while, doing sit-ups while getting punched in the stomach, running on the beach getting all eye of the tiger-ey, catchin’ chickens and greased lightnin’. Generally, make Audyssey even more Audyssome.

I give you, the Pro Calibration Kit!

When I pulled this baby out of the box, my first thoughts flashed to the Secret Service forward protection detail that came when President Clinton played golf at Orinda CC. They had these (totally awesome) black bags strapped to the back of their golf cart. In the bags, sniper weapons. Long guns. Bad...ASS! And any time a tool can make me feel all Day of the Jackal, it is instantly better than like 90% of other tools. So, a totally BAD ASS carrying case. Like I just want to carry this around on installs while wearing black jeans and a black turtleneck and mirrored sunglasses and just stand all quiet and aloof over in the corner, observing until it is time to get down to calibrating. That’s who this thing makes me want to be. When's the last time a tool inspired you to want to be a better, cooler man? (I will accept, "When I got a new wetsuit" as an acceptable answer. And possibly even a new chainsaw. They're pretty bad ass too. But, obviously, not as cool. And tougher to carry around all the time without rousing some *serious* suspicion.)

Opening this baby up reveals a ton of goodness inside. 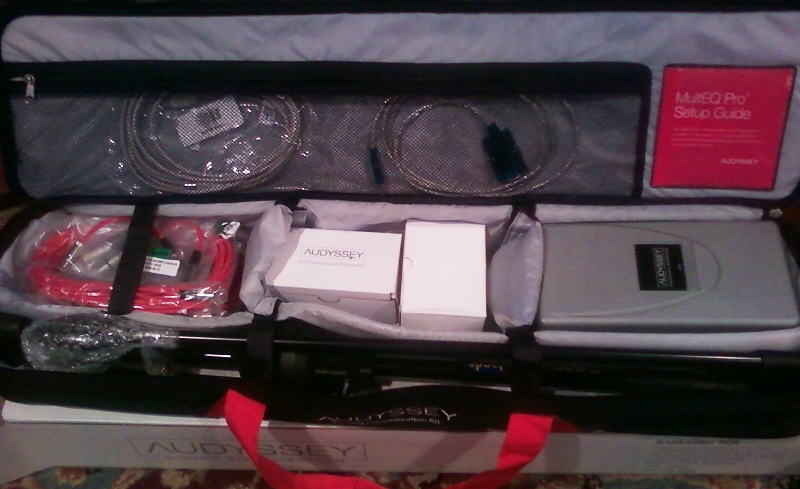 A professionally calibrated and certified microphone with stand, cabling, a CD with calibration specs matched to the microphone, etc. Audyssey also gave me a license to try this baby out on my new Marantz (which is Pro EQ enabled) AV7005 pre-pro and I’ll be reporting my findings – and posting my before and after calibration results -- later. But, right off the clip, it is pretty apparent why this would do a way better job calibrating your room. On one hand, a cheap, generic plastic microphone shaped like a pyramid that got tossed haphazardly into my box at the factory after being grabbed from a giant pile of thousands of other similar microphones. On the other, a microphone that has been professional tested and calibrated with the calibration notes saved to a matching CD. So, yeah, I’m guessing that it will do a *slightly* better job of taking measurements. Better measurements means better data to work with. Better data means better sound.

And THAT is why I am totally, super excited about my new sniper rifle, I mean, Audyssey calibration kit.

Click here to read my full review of the Audyssey Cal Kit at Residential Systems.