Despite the “NO SOLICITING” text prominently affixed to our front door, we get people that randomly come by wanting to solicit things to us. Over the years we have had tons of people wanting to sell us health insurance or see if we need a small business loan (really? Like I’m going to sign up for a business loan from some guy that just comes in off the street? What? You just want to hand me some money? Well, OK, tell me more..."), how much are we paying for our credit card rates, I’m an artist and I have a bunch of paintings in my truck, would you be interested in buying some, to  I’ve got a truck full of frozen meats that I have to get rid of before I can return to the shop today. (Yeah, strange truck meats. Sign me up!)

So usually I dismiss these people with a quick, “Uh-uh. Thanks, but, no,” or perhaps a more, “Look, I’m busy. This is where I work, not where I come to buy truck meats. Bye.” But one guy last year came in (it was on April 9 in case you’re curious. I know that because I am looking at the large 4/9/10 that he wrote on the card…damn! I spoiled it. OK. I bought the stupid thing!) with an offer that seemed too good to be true. (Are you sensing the fore-shadowing here? Because, if you missed it, there it was. I’ll slow it down for you. SEEMEED...TOO...GOOD...TO...BE...TRUE.) 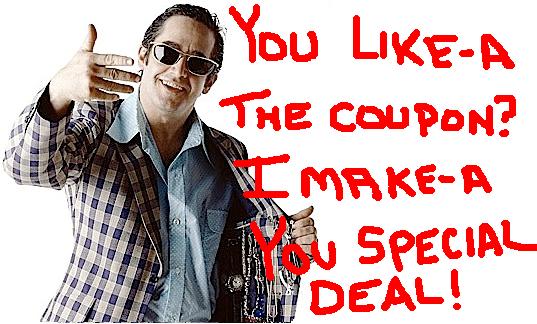 He had this card from a company called DeFalco’s Automotive & Towing that offered 4 oil changes, 2 tire rotations, 2 flat tire repairs, a brake inspection and adjustment AND a free local tow. All told a $300 value. (So sayeth the card.) But wait! If you act now, all this can be yours for $35.  I’m not convinced, I’m busy, there is probably a blog that needs to get done, these things just end up sitting on my desk and expiring, blah, blah. So that’s when he directs my attention to the text written in underlined bold red: “CARD DOES NOT EXPIRE.” Hmm, the plot thickens. I am interested. I love deals and this seems like a lock. A never expiring lock, which, as we all know, is the sweetest lock of all. That and the one that you can shoot with a gun and it will still be locked. Yet that is a lock-sweetness of a different flavor.

Then he flips the card over and starts going through this list of items on the back culminating in big, ole red #7: “SATISFACTION GUARANTEED.” (That’s more foreshadowing in case you dozed off...)

“Do you have work vehicles here that need regular servicing.”

“Of course. We have three vans. Seems like they’re always needing oil changes.”

“And what do you pay for those oil changes?”

I can feel myself helplessly falling deeper and deeper under his Scheherazade spell and unable to stop it. His voice is like a velvety rhubarb. “I don’t know. Maybe $24.95 or something.”

“So buying this card would be like getting at least two oil changes free. Even if you never used the other services. Which you might because they NEVER expire.”

“Tell you what, you buy a card for each of your work vehicles and I’ll GIVE you an extra one for your personal vehicle. One free card, just for you.”

So at some point I ended up getting four of these magical cards for an even hundy. And for a while things went along fine. We took our vans for some oil changes. I took my cars for oil changes. They honored the card and we left. With new oil.

But then today we took two vehicles over to have an oil change. My installer hands the guy the card and he abruptly says, “We don’t take that anymore.” Apparently this quickly escalated into a volatile, “YOU WILL TAKE IT!” “WE WON’T TAKE IT!” where eventually a couple of mechanics walked in with big ass wrenches asking if there was some kind of problem here that we didn’t understand about the not accepting the coupon thing.

My installer then calls the number on the card and leaves a scathing message on the guy’s cell phone where he *might* have threatened to call the local TV station and tell him about the scam that he was running. So, this is the hornet’s nest I walk into this morning when the guy – Monte, as in “No, my name is NOTHING like three-card Monte. That game is for shills and scofflaws. I’m Monte as in Let’s make a deal...a GREAT deal!” – calls my installer back and he then hands the phone to me. The guy is put out about the little threateney part and tries to explain that he made a deal with someone (De Falco’s) that turned out to be a dishonest cheat and now his reputation is ruined but that none of this is his fault.

He hems and haws about how he is really the victim here and that he sold 300 of these things and now everyone is mad at him, and this never happened when he worked up north and blah, blah. Then he says he’s been trying since November to find a solution.

“Yes, I’m trying to find another servicer that I can work with.”

“Do you think that maybe if back in November when you found out about this, that if you had called people, you would have been able to head off some of these angry situations? Where people wouldn't go in in good faith to use the coupon and only then discover that the bill of goods you sold them was useless.”

“Well, I wanted to wait until I had some good news to tell people.”

“That has been three months. How many people do you think have gone there and discovered this on their own in the past three months. And then gotten really angry. First at De Falco's and then at you. I know that you and I would not be having this call right now if you had given me a courtesy heads-up call.”

I reminded him about the not expiring part and the satisfaction guaranteed bit, and that I didn't care what his deal with De Falco's was that all I remembered was shaking his hand (that's a real honor-burner for a northerner) and handing HIM the money and mentioned that myself and the 300 other card holders probably had a pretty legitimate class actionable situation here. But it was obvious I was talking to a beaten man. He couldn't fix the problem. Well, I guess I could drive my vans over to his house and make him change the oil. But then it would just be an angry, spiteful oil change and no good ever comes of that. And, seriously, for the $100 we spent, I think we got like 5 oil changes so at worst we probably broke even. And now a blog, so, really, you're all the winners. Sadly, it all just makes me *seriously* reconsider whether those paintings I bought really are actual original Dali's and exactly what kind of animal produced all those truck meats I've been eating...

Reply Lbgpneut
8:16 AM on January 29, 2021
buying viagra without perscription viagra alternatives where can i buy viagra with out a prescriptrion

Reply Fjjudiese
12:44 PM on March 1, 2021
how much icariin equals viagra how to buy viagra viagra meaning

url=https://papersonlinebox.com/ says...
write my paper for me fast

Reply BbshReet
4:25 AM on May 13, 2021
vietnamese viagra https://loxviagra.com/ what happens when a woman takes viagra

Reply Lbsodiese
8:26 AM on May 21, 2021
online generic cialis https://ucialisdas.com/ canadian cialis no prescription