Survivor: I vote you BACK on the island!

Confession: I love Survivor. You don’t’ need to make any comments about how lame it is or how reality TV is contributing to the downward spiral of our generation. I don’t care. To date, I have missed a SINGLE episode...Season 1, Ep 1. From Ep 2 on, I have been there for every immunity challenge, tribal council, lie, backstab and player meltdown. Even during that strange and cruel season when my DVR tried to bone me out episodes week after week, I’d find another way. Like a cockroach, I would scurry to another platform – Internets, On Demands, a friend’s house -- and get my Probst on.

And sure, some seasons are better than others. You can’t expect a nice guy, soccer-star Ethan, or a cute and quirky and feisty Courtney every year, but you can usually count on Mark Burnett of doing a pretty great job of casting interesting personalities and Probst bringing it all together in a mélange of interestingness.

But, last season left me a little…wanting. It very well could have been that topping the double-whammy which was Survivor Samoa – aka the Russell show – and Suvivor Heroes vs Villians (likely the GREATEST season of Survivor to date) was just setting viewers up for a disappointment. Sure, I tuned in week after week, but the show didn’t really hit its stride until the final few episodes. (Here’s a link to my recap of last season's finale.)

So, last night was the start of a new season, Survivor: Redemption Island. Was this redemption for the lackluster previous season? Redemption for Boston Rob and Russell, back for a 4th and 3rd go round? Redemption for the viewers who have stayed with the show for so long? Don’t know, don’t care. New Survivor was on, and I was tuning in drink in hand! 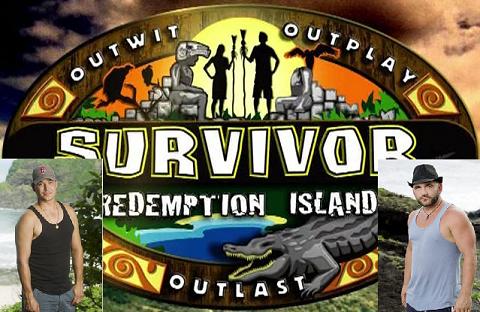 And I have to say, Pow! What a great opener! Arguably one of the BEST Tribal Councils...ever! And this was only the first, typically “honeymoon phase” episode where everyone is supposed to be all nicey and sweety and not-pissing-everybody-offey. And even though you really only got to know half of the players – the episode seemed to focus a vast amount of time on Boston Rob’s tribe, only showing a couple of “We need to vote Russell off immediately!” “He’s a cancer and can’t be trusted!” shots of the other group – the people we’ve met so far seem like they’re going to make for a great ride. Plus, while Russell makes for great TV, I would much prefer to watch – and root – for Rob. He seems like the kind of cool guy you could actually hang out with.

So, my highlight reel recap of the season opener...

Probst mentions that this is going to be a rainy season and apparently Survivor crew is taking mercy on these poor souls by providing them with hammers and nails to help build their shelter. Definitely a Survivor first which will probably foreshadow some hellish living conditions for the contestants. Delicious!

Rob starts bonding with the younger members of his tribe right from the get go who seem to be a bit in awe of him. He is taking a more, wizened, elder statesman, let’s-all-work-together-and-win-this-wicked-bitch approach that is making him a leader in a non-jerk kind of way. This semi-alienates the three older people on the tribe, Francesca, Philip and Kristina, who see Rob as the total threat that he really is and think that he should be voted out immediately. Except for Philip who turns this conversation about voting out Rob into some kind of interrogation where he is questioning everything and coming off like a condescending psycho. Philip, buddy, it is DAY ONE! You are already pouring gas and throwing matches on the bridge!

Philip might seriously be crazy, and while his dialog makes me cringe and look away in general embarrassment for the shared human experience, if you can just listen to the dribble coming out of his mouth, you can find the humor. Funny in the Robert DeNiro laughing in Cape Fear kind of funny. Philip opens almost every statement with, “I am a formal Federal Agent! I’ve worked for multiple Federal Agencies! So you can trust what I say!” And you HAVE to love the gravitas of, “You know, I’ve been thinking it over whether or not to tell you people this, so I’ve just decided to come out and say it…I used to be a Federal Agent.” Who cares?! Plus, you’ve been weighing it over for what, like the whole 15 minutes you were at camp? Glad you kept up the fine fight as long as you did!

Then he tells the whole group that he can read people and he knows who is lying and he’ll be useful in the merge because all his years of Federal Agentness will help him to know who they can trust and blah, blah, blah!

Rob, who is wicked-smaht and wicked-clevah and wicked-good at reading the competition, sees immediately that Kristina is a player. He says to the others, “Did you see the way she went right to that basket? She knew to go and look for a clue to the immunity idol. We need to watch out for her, and I wouldn’t be surprised if they had the idol already.” Bingo!

Kristina finds the idol, proving that the person that can REALLY read people is Rob. So, Kristina decides to tell Francesca that she has the idol in a random beach walk talk that goes something like, “Look, I found the idol, so we need to vote off Rob.”

“Where was the clue?”

Then when she is trying to convince Philip again to vote Rob and he is having some kind of internal struggle with the whole thing she finally just grabs his hand and drags him over to her idol hiding hole and says, “Look, I have the idol! Vote off Rob!” Philip seems to be on the trolley with this, but it is just SO clear that these women know that they have already decided to join forces with El Grande Loco and yet they are powerless to get out of it. The true awesome-level of his crazy was yet to be revealed...

Rob’s team loses the really physical immunity challenge – which is kind of surprising because they looked to be the younger, stronger team – which was pushing these giant stone blocks across a track and even though Rob appeared to be making a heroic puzzle-challenge comeback at the very end they lost. So, they head to Tribal and this is where it just gets ramped up to a new level of “Oh, no, he di’nt!” crazy-awesome!

Probst starts out with his typical round of probing questions – how’s life at camp, who’s the leader, how does everyone feel about Rob, etc. – and it comes up that a weak player will probably be voted off to keep the tribe strong, so the men are basically getting a free pass except for Rob who has an asterisk on his back (according to Probst) then Francesca says something like, Rob shouldn’t worry about getting voted off. Then Crazy Town population Philip pipes up and says, “Uh, excuse me! Excuse me! I’m a Federal Agent! And you and Kristina came to me and said we are voting Rob off tonight!”

This of course starts the awesomeness where Philips – who LITERALLY cannot pronounce Francesca’s name; is it Frachessqua, Frankwessqua, Frankwa, Fran2%xq&a, Frangelica, each time it is something newer and better! And he apologizes because he is taking some mouth dryness medication medicine or something; a medicine that apparently ONLY affects his ability to say the word “Francesca” – and Francesca and Kristina totally get into it. Then Philip blurts out something like, “Kristina, you showed me your immunity idol. Did you not say that we were going to get them to vote for you, you would play the idol and then we would vote for Rob? And, I remind you, I WAS a Federal Agent!”

Kristina and Francesca are basically melting at this point and look like they would rather be sitting IN the fire than anywhere even close to Philip. Rob then makes Kristina show him the idol and then demands that she give it to him or get voted out! It was a classic Boston Rob, “I’m not tellin’ you what ta do, but if you want me ta believe ya, you know...” Great stuff! She keeps the idol and they go to vote and since “I was a Federal Agent!” Philips said he WAS going to now vote for Franzia, she is the first to get voted off and sent to Redemption Island.

Still not even sure what Redemption Island is totally all about, but this season is already kicking last season’s butt and looks like it will only get stronger. I'm only hoping that both Russell and Rob last long enough to have some kind of head-on altercation or -- sweet Lord, let it happen! -- a team up where the work together and run the show! Either way, this season is off to a killer start. Game On!