My Plasma TV, the 9G swan-song Kuro – “Deep, Black, and Penetrating” a tag-phrase that is just BEGGING to have a lewd joke made about it. However, I caution that even*suggesting* that it lends itself to a lewd joke to Pioneer’s female PR rep while at CEDIA might just return you a really awkward and uncomfortable silence followed by several moments when you wish that you’d just saved your little comment for yourself or for someone who would really appreciate its lewd nature, like say a Darryl Wilkinson, Geoff Morrison or Dennis Burger; any of those gentleman would favor any number of punchlines that included a “Deep, Black and Penetrating” setup. – from Pioneer Elite is still regarded as the best TV ever made. Amazing, hole-in-deepest-darkest-space blacks, terrific color reproduction, stellar video circuitry, the whole magilla.

Except the thing sold for like $6500.  And at a time where people were buying $1000 55-inch Vizios, losing jobs by the tens of thousands and watching the Dow drop 500 points a day for sport, it was tough to move people up to the Bentley of TVs. Usually the comment was, “Yeah, sure, it looks great! But in my house, when I don’t have THAT hanging on the wall right next to THIS, it will look pretty good. And save me like $4000. So, wrap up the cheap one, sonny!”

So, Pioneer made the crushing decision to exit the TV display market. A market that they had totally pwned ever since creating their first big screen rear pro (in a totally bizarre, we can because we SAY we can, 16 x 10 aspect ratio that didn’t really fit anything perfect, but probably has voluminous tomes of white papers written on WHY the world should be watching 16 x 10 aspect ratio. I digress...) straight up through the introduction of their Plasma set and culminating with the 9G Kuro. Even right before they ceased production, Elite wowed the press corps at CEDIA with a closed door demo of what was promised to be the next-gen of the Kuro something called Project Kuro that would have an INFINITE black level. I remember seeing the demo and gasping. In a pitch black room the image just appeared from nowhere. It was stunning and beautiful in a way that only the most crazy-sick-cool tech can be.

And then with all of this frothy buzz and excitement and "Oh, God! I'd kill someone to get my hands on that set. Seriously. You tell me who to kill, and I will do it."...they went out of business. Pioneer ceased production on all flat panel displays. For a brief time there was some talk about having Panasonic make the panels to Pioneer's spec but then that sputtered and died. Kuro was dead. Long live something else! It was a flag-at-half-mast kind of day for the entire CE industry. (And I gave myself big-ups for picking up a 9G set while I still had the chance!)

And I have it on good authority – as in straight from Pioneer – that Panasonic was literally standing outside of Pioneer’s gates snatching up Kuro engineers as fast as they could get their names to dry on new work contracts. "Sir! You look like an engineer! You've got the, umm, glasses and the, uh, protractor thingy and that pasty work-inside-all-day-skin-lit-by-cathode-and-fluorescent-look and just kind of exude an eau de awkwardness with the ladies. How'd you like to come to the Panny team?" And now, Panasonic Plasmas are, in essence, the next gen Kuro panels. (I'll say it. If my Kuro broke today, I'd buy a VT series Panasonic. I'd be sad, sure, buy mostly because of all the money I'd have to shell out. Messing with my money is like messing with my emotions.) Sure, I’ve no doubt that Pioneer still retains some of secret-ingredient-Black-X-Kuro-sauce but for the most part, Panasonic already made a good panel, now they make a DAMN good panel.

But way-back machine it to 2007, where you probably don’t recall that Sharp purchased a significant stake in Pioneer; giving Pioneer some much needed payola and leaving people to wonder exactly what it would all mean. The speculation always centered around a Pioneer branded LCD using Sharp’s manufacturing and production and a Sharp optical disc – aka “Blu-ray” – player using Pioneer mojo. The announcement called “for Sharp to take a majority 14.3 percent stake in Pioneer for $357.3 million, and for the manufacturers to combine their expertise to jointly develop products in audio, car electronics, displays, next-generation DVDs and network-related in-home electronics applications.” But this was all prior to Pioneer taking a powder on the display biz. 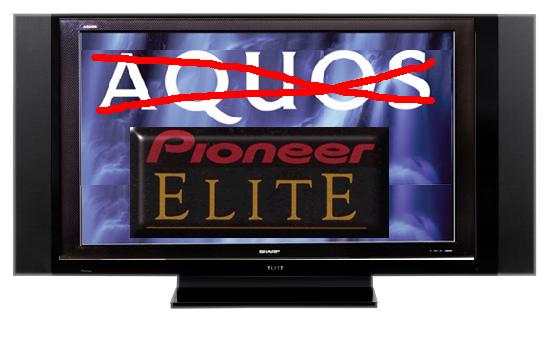 Well, last month it was announced that Sharp was going to resurrect the Elite name and start producing a new premium, more exclusively distributed set branded, once-again, as...wait for it...Elite. From the press release: "Sharp Electronics Corporation, the U.S. subsidiary of Japan’s Sharp Corporation, and Pioneer Electronics (USA) Inc. today announced that Sharp will be granted license of Pioneer’s 'Elite' brand for a line of high-end flat panel displays to be introduced in the U.S. and Canada this year." At this point, details are pretty limited, as in to say, completely unknown. Screen size: Unknown! Refresh: Unknown! Number of Ds: Unknown! Price: Unknown! Availability date: Unknown!

Now, it’s probably not unreasonable to assume that it will be a flagship offering, mirroring whatever Sharp’s current top-of-the-line model is. But what I’m guessing is that you will essentially end up with a top-of-the-line Sharp QUATTRON set merely covered – aka “rebadged” – with a nice, new shiny black bezel that says “Elite.” Oh, and PS: rebadged with a nice, new shiny price premium. So basically a prettier looking frame. (Though, to be fair, it isn’t like Sharp makes ugly TVs. But SOMETHING is going to have to differentiate these sets other than, “This one was says Elite. And costs a lot more.")

My old Pioneer distributor called me today. He wanted me to get on the trolley with the new Pioneer branded sets. And to do so, he informed me that I need to start buying Pioneer receivers and disc players because Pioneer is going to see who their friends are before choosing who to allow to purchase the new set. Except, hold-up just a minute. A) I’m not even sure that I’m interested in a more expensive, rebadged and glossier Sharp TV. These TVs are a totally unknown entity and last time I checked, Pioneer was king-of-the-world great at making PLASMA TVs but these are not going to BE Plasma TVs. They are going to be LCD TVs. Which Pioneer knows nothing about. How big, how much, how good? Unknown. B) I’m already a direct Sharp dealer, so if I want to buy Pioneer Elite QUATTRON TVs, I already can. They’re called Sharp QUATTRON. C) I don’t like the “buy some stuff now so you might be allowed to maybe buy some more stuff you might not even want to buy later.” Yeah, no thanks. Something tells me that if I decide I want to be a “new” Pio-Sharp dealer, I’ll call them with an order and they’ll be like, “Super awesome! How many do you want?!” “One.” “Great!” “And maybe I’ll buy more later. And maybe I won’t.” “Yeah! Right! Outstanding! One it is!!!”

Now, maybe I’ll be wrong. Maybe Sharp has been holding out on their own technology for all these years. You know, throttling back everything they know about LCDs, and putting out a 90% product just waiting for the day when they could help maybe manufacture a rebadged Elite. And then, and ONLY then, will we see the full 100% power of QUATTRON, or possibly something even more awesome like QUINTTRON! Adding a new FIFTH LCD color like vermilion or cerulean to really bring out the deep, ugly purple shade you’ve always been missing when viewing eggplants on the cooking channel or more realistic deep-tissue bruise-shading for your UFC pay-per-views.

Now, I’ve no doubt that these will be a fine looking TVs. Because Sharp knows how to make fine looking TVs. So, if you you’ve got some kind of tech-grudge on a TV that says “Sharp” on the front, or just made some death bed promise to your father to only buy “Elite,” then great. But if the industry – or TV buying public -- is holding its breath for this to be the next chapter in the Kuro saga, I think they are setting themselves up for disappointment. Deep, black and penetrating disappointment. (Zing!)