Give me a heaping bowl of Survivor Sundae!

As you all know, I love me some Survivor. Even after 21 Seasons – we’re midway into number 22 right now – it seems to stay fresh, new and original. And if there was an All-Survivor, all-the-time cable channel, I would probably find a way to fuze my cable box to it. It would have behind the scenes at the Ponderosa, crazy deleted scenes from confessional footage, and come with a personalized buff smelling of Probst's unique musk and wit. And after all of this time, necromancer and all-around TV programming warlock, Mark Burnett, has developed a magical recipe filled that makes the show work time and time again.   The recipe is really pretty simple, with nothing so exotic as ground up rainbows, angel smiles, unicorn horn or Kim Jong Il chin stubble. And what you get when finished is a delicious Survivor Sundae. It takes a village to raise a child; and it takes all kinds of personalities to fill out the melange of awesome that is Survivor.

Step 1: Grab your bestest, most awesomest, most witty and charming and laser-insightful bowl. Every awesome sundae needs a foundation to serve as the bedrock for all that sweet, sugarey goodness. In Survivor, this is The Probst, who is without a doubt the most important ingredient of the whole show. While Jeff Probst’s previous resume highpoint might have been his short tenure as host of VH1’s Rock and Roll Jeopardy, those days are LONG behind him now and Probst and Survivor are now forever inexorably intertwined as Probst *owns* Survivor in a way that few hosts can even dream of. You can tell that he’s in his element and that he is loving every minute of it. And while he used to sit back and ask vague, open-ended questions – How’s life around camp? Has anyone proclaimed themselves Captain Douche? Is the one scoop of rice enough to eat? – now he asks probing, needling, jamming-the-branch-DEEP-into-the-hornet’s-nest and then violently wrenching it around while setting the tip on fire questions that quickly turn friends into enemies and shred alliances. He is SO good that I sometimes wonder if perhaps he has a tiny ear receiver – no doubt supplied by Phillip’s Formal Federal Agent(?) covert military contacts – where an entire team of producers sit off camera feeding him lines. But, no. I think that Jeff is JUST that good. Some of the best moments of the show are Probst-isms; either during challenges, at Tribal or the wrap-up. Worth playing for? Abso-frickin-lutely!

Step 2: The casting. Year after year, the Survivor casting team manages to unearth people that are mostly fun and interesting to watch. But when you put it all together, what you get is a Probst-bowl loaded down with crazy-delicious. 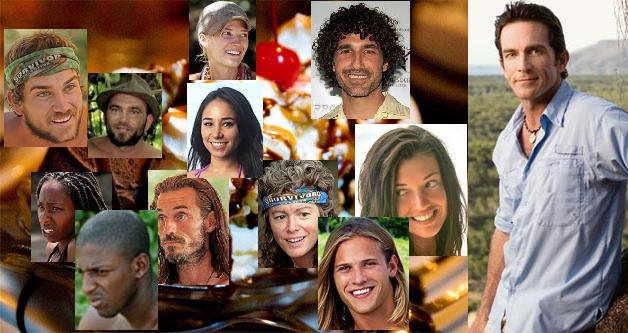 Of course, every sundae has those occasional boring scoops of vanilla. And I’m not talking something fancy like a French Vanilla, or Vanilla Bean, or slow-churned, double-cream, old-fashioned vanilla. I’m talking ice milk vanilla. Thin, watery, plain and non-descript. These are the people that just seem to blandly roam about, occasionally standing there in the midst of a conversation, or seen in the background of a shot looking absently into the weeds or sitting mindlessly by the fire, not really contributing anything. These people play the so-called fly-below-the-radar “strategy” if doing absolutely nothing can be a strategy. Vanilla is fine. Vanilla is nice. But vanilla is just there to make the other flavors even more standout. You don’t win friends with vanilla. (Note: That is unless you want to be friends with Lauryn. In which case, vanilla is the surest way to starting a friendship. Just be sure to bring a cone.)

Fortunately, alongside vanilla comes, those thick, delicious, rich and creamy scoops of some chunk-filled Ben & Jerry's that makes the plain vanilla just seem even more plainer and even more vanilla-er. These are the beautiful people that are there to pretty up the fact that people are sleeping outside with little or no shelter and almost nothing to eat for 39 days; these are usually women – OK, usually young women – who start the show wearing like the skimpiest piece of clothing they could find, or just ditch their own clothes all together and try and find some “modest” way to wrap themselves in their team buff – “Oh, whoops! My boobie fell out again! Uh-oh! He-he!” And at some point they give up the little charade and decide, “Ahhh, what the hell? Might as well take off my clothes and go nude sunbathing!” or decide to gallivant around in shorts that would be considered risqué even at a bachelor’s party. Or, say, go totally naked for some chocolate and peanut butter. The Survivor editors would club a baby seal for a well-placed, oh-so-teasing-taunting camera blur.

Then comes that occasional, but totally unwelcomed and weird chunk of pineapple or some other random unwelcome fruit. Sundaes are no place for you, fruit compote. These are the unwanteds. The “IF ALL YOU ARE GOING TO DO IS COMPLAIN, THEN WHY DID YOU SIGN UP FOR SURVIVOR IN THE FIRST PLACE?” people. These people are lame, and – thankfully – usually don’t last long. Yes, it’s hot. Yes, you’re hungry. Yes the bugs are biting you in a way that makes it disturbing for us to even look at you – even more so now that CBS finally got on the HD trolley. Come on! THIS IS SURVIVOR! If you wanted to play “lay about at the spa” then you should have tried to become a real housewife of something!

Then there is the thick, hot vein of rich chocolate. These strong, tough guys – or the I don’t care how married  you say you are, Sham-lesbos – who preen around with giant, glistening muscles waiting for the physical challenges where they can justify their Alpha-male roles in the tribes. “I’m gonna go cut down a few trees with my bare hands and then punch a lion in the neck and then swim back to the mainland for a quick cardio surge before the challenge!" Generally these are the first guys to say, "I just...can't believe...how hard...this is." They gasp and they choke and the usually can't swim for a damn or outrun that free scooter thing at Wal-Mart, but when it comes to throwing someone out of the way in a challenge, you can usually count on them to get the job done in a spectacular, rage-fueled way.

Then there are bright-red, ruby-delicious, Red Cancer #5 cherries on top. These are the stars. The players that just seem to do it all right. They play hard, they work hard, they’re into team building and remote synergy. They know how to strategize but don’t come off like megalomaniacs. Or they are just super cute, and snarky and sparkle on camera and call Probst “Jeffrey” and things like that. These are the I'm such a nice guy and I'll still win and take THAT cancer! Ethans, the yes I may be the baddest-ass girl ever on this show Stephenie Lagrossas, the swims like a dolphin, climbs like a monkey Ozzy, the so thin she's barely there but strong with the Snark Courtneys, the how does he just keep getting better? Boston Robs, the I'm going to smile and wink and tell you how long I've been on Survivor while I'm stabbing you in the back Parvatis, the carved from a single, solid gleaming mass of obsidian James...

Then you have the sweet and creamy whipped cream. It's light, it's airy, it's fluffy, it coats your mouth with delicious. These are the players that come on to just "play a fair and honest game." These are the people that say things like, "Come on, team! Let's all work together!" and then when they get voted out, "I'm happy with the way I played the game. I never lied, cheated or back-stabbed anybody, so I'm the real winner." Sadly, this game isn't called Friends: The one where they all get back together on the island and don't have to vote anybody off. You may like whipped cream; heck, you may even LOVE whipped cream. But it never wins.

And then...we have the nuts. And the nuts can be the most delicious and interesting part of the Survivor sundae. They add the rich, crunchy texture, the smoky, nutty goodness that helps to tie the whole package together. The Russells and their  "Are you with me or are you against me?" and I'm gonna sabotage my own tribe. The Johnnie Fairplays and his dead grandmother. The Coaches and his daily Tai-Chi ritual and sailing down the Amazon, avoiding cannibals that want to turn his head into a soup bowl. The I think he *really* thinks he IS a pirate, Ruperts. Or the I'm just so angy and ghetto and no I din't take that rice! OK I DID take that rice, but only sos I could buries it and keeps you peoples from eating all of it for your own good, NaOnka.

And this year, we have possibly the nuttiest-nut in the history of Survivor...EVER! His name is Phillip Sheppard and I want to devote an entire separate blog to him. It seems the gallantryly thing to do. Survivors ready? Go! So get your spoons ready, Survivor fans! I plan a big dish of Sheppard tomorrow that I hope you'll enjoy!