Very few trades illicit the reaction the custom installers receive. A plumber could visit a thousand jobs and probably never receive a single ounce of the excitement that our arrival can produce. Sure, there may be some of the urgency and, “Oh, thank God you’re here!” upon his arrival, but it is usually related to something dire. A broken pipe, a clogged sink or…worse. Far, far worse. Because ultimately, at the end of his visit, “Fixed your toilet, ma’am” will just never have the magic ring that, “You want to watch a movie now?” has.

That is our gift. We make magic. We bring happiness. Not every day, and not on every job, but there are many opportunities throughout our careers where we have the ability to literally produce excited gasps of pleasure, awe and wonder. And, there are few aspects of what we do that have more magical potential than installing a new home theater system. Even in my personal home theater – years after its install – when I press a button on the remote to raise the masking on my screen and engage my anamorphic lens, I am immediately a smiling, happy client amazed that this...this...awesomeness is happening in my own room.

But like any magician, our “tricks” work best and have the greatest impact when we preserve and protect the great reveal. 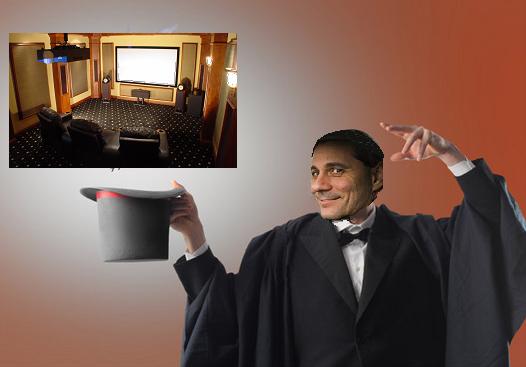 Generally our “Pledge” is the promise to do something amazing. The family has either decided to upgrade something existing or to add something new entirely. Now, clearly, the level of “Wow!” is in part dictated by how much work we’re doing. And I’m not implying that you should expect to be rewarded with a standing ovation for swapping out a DVD player for a new Blu-ray. But when the job is of significant scale – let’s say a completely new system in the family’s newly renovated room over the garage – the stage is set for you to literally perform magic!

In the case of our business, we are often literally “Turn”ing something from one thing into something else. And most definitely taking “the ordinary something” – a previously unused room, a boring living room, a poorly installed system – and making “it into something extraordinary.” But “The Turn” is the part where I think most installers blow their biggest making magic opportunity. Sure, they might do a bang-up install, using wonderful equipment and correctly positioning and calibrating everything and hand over a wonderfully working system. They might do ALL of that right, but still miss the moment that is my very favorite on the project…the reveal!

Most installers allow the client full access to them and the room during all phases of the setup, installation, calibration and optimization of the system. The client stands there and watches the wire being retro’d in the wall. Walks away and comes back to watch you unboxing all the gear. Walks away and comes back to see the screen going up. Returns to watch test patterns on the screen or whatever lame disc is on hand and hear test tones or some music playing out of their new speakers. When it comes time for “The Prestige” – or the big reveal – the moment is lost.

They’ve seen all the magic. They’ve already watched you practicing your big saw-the-lady-in-half trick and now there is nothing special to it. Sure, the trick might still be interesting to watch, but once you’ve seen all of the behind-the-curtain goings-on, it doesn’t have any magic left. They’ve seen the big screen; they’ve heard the sounds coming from all around the room; they’ve heard the pounding of the sub. Sure, it isn’t the same as watching the movie, but they’ve thrown the lights on inside of Space Mountain and seen that it’s really just a basic roller coaster that twists and turns in the dark.

To continue reading about The Prestige, follow this link to Residential Systems...