Everyone loves a puppy!

Growing up, I never really got to have a puppy; my dad wasn't exactly a “pet” person and definitely did not want to have anything that either A) came in and risked messing up the house or B) stayed outside and risked messing up the lawn or C) was a non-contributing member to the household. Thus, over the span of my childhood, I had the requisite smattering of goldfish won by tossing ping-pong balls into glass bowls of water which served as an indoor pet, and a bunny and a kitty or two which served as outdoor pets. (In what turned out to be a horrible idea by my dad, the bunny was not kept in a cage, but rather had a collar and rope to let him roam and hop around freely. This worked wonderfully for a few days until the bunny, Henry, wrapped himself around a tree and died in the scorching southern California sun. Oh, the tears that were shed over that childhood tragedy!)

The closest that we ever came to puppy ownership was years later when my younger brother, Adam, finally wore my dad down to the point where we were able to TRY to have a dog. We had a fenced in area that was all pine needles and leaves and dirt (and a horribly un-environmental area in the WAY back corner where my dad would dump used motor oil; look it was the crazy 80s, people were practically having used motor oil fights in the street!) beyond our grass that was deemed appropriate for a dog to go forth and be doggy. So we brought home a yellow lab that immediately started jumping the fence in the “dog sanctioned” area and gallivanting recklessly on the "dogs forbidden" grass area like it was some kind of person. After the weekend, we had to return him. Or her. I honestly can’t remember. (The gender of puppy-long-gone is irrelevant to this tale.)

But a weekend is enough time to find out that you fall in love with a puppy. So cuddly and lovable and excited to see you. You bring a puppy into your home, you’re probably gonna keep it. (Unless your father happens to be one John Sciacca and then, well, I’m here to empathize with you and your puppy-less upbringing. I’m also happy to discuss the yard work and dime-a-day allowances.)

So, a few posts back I wrote asking why it is so hard to understand luxury A/V products versus other luxury lifestyle choices. Specifically, I compared flying First Class – and actually *paying* for it – to owning a Kaleidescape system. They are both luxury decisions, but people seem so willing to make the one – be it travel, or jewelry or automobiles or sweet-sweet single-malted liquor – while horrified at the idea of making the other.

And it isn’t even necessarily about not having the money. I mean, yes, if you are down to making a decision between paying the mortgage or springing for that movie server -- or crazy-expensive power cabling -- I am going to strongly urge that you go for the option that keeps a roof over your head. But when it's not about money, why not? A commenter over at Kaleidescape’s owners forum (oh, yeah, we definitely have a club, and we'd love to have you as a member. The dues are surprisingly reasonable) posted, “I see this all the time, John. Some folks just don't enjoy the movie watching experience as much as others, or even when they do they don't see the added value to a K system. Two of my better friends have no interest in K and have shared a response similar to the article you point to in the post. One is actually a Billionaire, thought nothing of looking at a $7 million home here in Honolulu, walking around the house for 20 minutes, then asking his wife for the checkbook and stopped at a table to write the check at full asking price, but he could not be convinced to buy into a K system, and he liked mine. The other friend also approaches a billion, and same response (he also bought a $5.2 mil property with a check last year).”

(We then went on to exchange several posts regarding the AmEx Black Card which he said wasn’t really all that special, that he and all of his friends had them, to which I said, “Yes, maybe they aren’t all that special but you also just called those two friends BILLIONAIRES!” Clearly I have the wrong set of friends.)

Kaleidescape’s co-founder, Cheena Srinivasan, read my post and offered a further explanation. “The reason it is such a hard concept to get across is because much like the old-days of selling two-channel products, ours is an experiential sale. Unless people experience it and use it every day, they just fail to get it.”

And I have to agree. I mean, I don’t HAVE to agree; I’m not contractually bound to agreeing with Cheena or risk having my Kaleidescape service cut off or anything. I guess I mean I DO agree. Explaining the power and the “magic” of Kaleidescape to people is difficult.

“It sorts, categorizes and manages all of your movies for you.”

“Yes, but Kaleidescape is totally different. It stores all of the movie data on a hard drive."

"Well, yes, but more accurately, no. It's all about the presentation, the way it instantly starts, the way it skips all of the trailers and warning and ads...”

And even if you demonstrate it to them -- as I have many, MANY times – they still *kinda* get it but not totally. It’s usually a “Well, yeah, that’s nice, but I don’t really need it” kind of a response. And, yeah, well, your Viking range and Sub-Zero fridge are nice too, but somehow you DID need them. The difference is, because it is experiential like Cheena said, you have to *live* with it to immerse in the experience and the lifestyle.

But that’s not always the easiest thing to do. Like, I’m sure I like some of you, but I don’t want you all coming over and hanging out on my couch all weekend long, eating my food, telling me the inadequacies of my Manhattan making technique (yeah, it's kinda my new drink) and grabbing my remote, and racing through my movie collection like a pre-teen amped up on Twizzlers and Mountain Dew. Also, I’m not gonna pack up MY Kaleidescape and let you borrow it. Are you insane? Then what am I gonna watch?

But, Kaleidescape has the perfect solution. It’s called the “In Home Puppy Dog Demo Audition Program.” (See now how puppies tie-in to this? I know, I’m brilliant.) 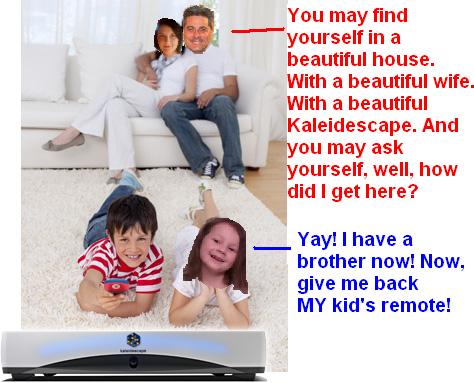 According to Kaleidescape, “Why is it called the Puppy Dog sales program? As you will see, it is a demo program that is likely to result in a sale, in that the Kaleidescape System will be so well regarded for what it has to offer that, like a new puppy dog, the family will simply not want to be without it.”

“The Puppy Dog sales program is designed to help dealers showcase the benefits of the Kaleidescape System to families with children in the convenience of their own home. The program offers a demo system pre-loaded with a diverse mix of content (click that link to see what’s loaded on your Puppy) on loan for in-home audition. The dealer and Kaleidescape Account Manager visit the qualified prospect, connect the Kaleidescape Cinema One to their television or entertainment system, and perform a compelling demonstration. Then, the family gets to use the system for a few days to fully realize the system benefits.”

So, I’ve posted a lot about how much I love my Kaleidescape. I’ve even posted about how much Lauryn likes Kaleidescape. (Dana has been less forthcoming with her Kaleidescape affections, preferring to play it cool and force Kaleidescape to come to her and make the first move.) Even when renting a movie, the playback experience is so much nicer. But it’s when you start re-discovering and browsing your own existing collection of movies or turning the reigns over to a 4-year old and watching her develop a love for movies that the system’s true power shines. But you no longer have to just take my word for it. Now, you can experience the awesomeness which is the Kaleidescape system for a long weekend in your own home! You'll get to play with the Cinema One, which I discussed here. (This also *might* have been a post that Kaleidescape's head honcho, Michael Malcolm, called "the best article on Kaleidescape to date!"

Click on this link and on the right side is a form to request an in-home audition. Fill it out and Kaleidescape will get in touch with you to set up a demo. Just be warned...it’s awfully hard to give this Puppy back! And if you should happen to drop my name when they ask how you heard about it, well, that’d be OK I guess.