HDMI not immune to Force Lightning!

OK, I don’t technically know that for an absolute fact. I mean, I haven't actually been able to witness any Dark Lords that have had so much fear over the switch from analog to digital that the fear led to anger, the anger to hate and the hate led to a massive Force Lightning suffering-attack onto a rack of HDMI cabling. Then, when tempers and the associated Force Lightning fires had cooled, had the chance to go in with the proper test equipment and actually confirm that the HDMI cabling in question had indeed had the Midichlorians blasted clean out of them. No. I haven’t been able to do that. Yet.

But I have recently discovered that HDMI is not only not immune to REGULAR electrical issues, rather it seems like a conduit for Force-multiplying their effects throughout a system. So I’m just assuming that would also encompass any rogue Sith Force Lightning attacks as well. 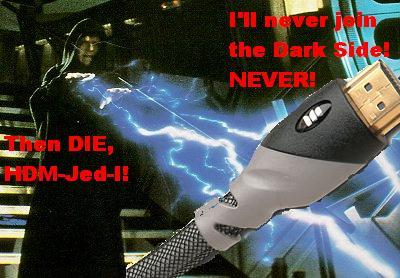 You see we get a lot of lightning storms this time of year in these here parts. Generally my partner and I look out our showroom’s window, rubbing our hands together, hopping back and forth like little boys doing the pee-dance, all the while grinning wickedly and saying, “Yes, my pretties! Yes! Go forth and do your evil bidding!” as each massive, horribly beautiful ground strike offers another opportunity for a full system replacement service call. Cruel thinking? Perhaps. But hey, these economic times are tough, and a boy’s got to do what a boy’s got to do. And if that means hoping that your Vizio takes a 1-million volt surge and has all of its silicon boards fused into pieces of low-end, no-discrete-code-having crystal meth, well, you’ll have to forgive me. (Or, you can thwart the attack by buying a SurgeX panel protector from me. That thing might be the best line of defense I’ve seen for stopping electrical surges. Pay me now or pay me later. I takes the money the same either way.)

So apparently we had a major storm a few nights back. I was away at URC in New York – probably debating the potential ills and hazards of mixing absinthe with all manner of household items -- bleach, Pine-Sol, Colonel Ichabod Conk’s Moustache Wax -- with Darryl Wilkinson – but when I got home Dana said there was a massive electrical storm that woke her up at 3 AM. And then back at work the calls started rolling in...

“I think this remote you sold me is broken.” (“Oh. Why’s that?” “It won’t turn my system on.” “Will it turn on if you walk up to it and press power?” “I didn’t know I could do that.” “You didn’t know you could walk up to your TV and try and turn it on?” “You said to use this remote.” “Yes, but if it isn’t working, then it’s OK to go up to the system.” “I didn’t think it would work anymore if I didn’t use the remote.” “Uh, well, pressing the buttons on the unit will definitely still work. So, can you try that for me.” “What do you want me to do?” “Walk up to your TV. Find the button that says Power. Press it. Tell me if anything happens.” “OK. I did. It turned on, but I don’t have a picture. So you think my remote is broken?” [Shoots self in head.])

One guy actually did the right thing, the SMART thing before calling. He went totally contrary to all popular thought and belief; he swam against the tidal stream; he spat into the face of logic and then held logic down and gave it the mother of all titty-twisters. He called his cable company first because he assumed that it was his box that was to blame! Yes! Finally! It has only taken 13 years but I’ve made a convert! Can the congregation give me a “Hallelujah!” and an “Amen!”? So the cable company came out and testy-test, unpluggy-plug, determines that their box IS working and that something else is awry. Now, I’m still not totally convinced, but my man has done his due diligence by calling Cable Town before me, so I am going to give him extra gold stars and a “Always Plan Ahead!” badge. See, I trust the cable company about as much as I trust that former Iraqi Information Minister. You remember the guy from the Gulf Wars, Baghdad Bob? The guy who would say things like, "There are no American infidels in Baghdad. Never!" and "My feelings - as usual - we will slaughter them all" or cheery predictions like "God will roast their stomachs in hell at the hands of Iraqis." Yeah. He was probably a cable guy before being promoted. Probably told Saddam his box was fine.

But, something was clearly up. The lightning seeds of destruction had been planted in rich, fertile soil. They have been carefully watered and protected from the harmful effect of surge protection and metal oxide varistors. And now they have blossomed into the fruits of multiple service calls. It’s time to go forth and reap the rich bounty! Some call it a Sling Blade, but I, I call it a Kaiser Blade!

So we sent out our service call minions to check the various jobs and we get not one, not two but THREE separate jobs where there have been massive and total HDMI failures. And I’m sorry, cable installer guy, you were right (this time)! It WASN’T your box! In what is possible a first for cable installer-kind everywhere, they were able to proudly raise their head and say, “Sir, I cain’t rightly say I know what y’er problem is, but it ain’t this ‘ere box and that's a fact!”

And I mean not just a simple “well your amp is broken” problem but systemic failures ALL through the HDMI signal chain. Like the HDMI was a length of Det Cord that just went through torching everything in its path.

Grand total of destruction (so far):

Four receivers had their HDMI switching totally smoked. The HDMI, she goes in, but she no comes out.

Five HDMI inputs cooked on TVs. Any input that had an HDMI cable connected, gone, daddy, gone. Black screen of, well, death seems a little extreme, but black screen of nothingness for sure.

Now, I’ve seen lots of lightning damaged stuff in the past. I saw a surge protector that looked like it had been twisted into a macaroni shape by an angry giant. I’ve seen plastic that looked like it had been pulled out of the fires of Mordor.  I’ve seen things where you can hear transistors and stuff all rattling around inside and there are visible soot marks on the outside. I’ve *smelled* lots of gear that now makes me unable to drink heavily peated scotch. I’ve seen a telephone actually BLOWN off the wall and across a room. (FYI: Lightning seems to be especially prone to coming into your home on the telephone and cable lines. Just a little heads-up. So, uh, yeah, don’t do anything about that. Just call me when something stops working...) But I don’t think I’ve *ever* seen a cable fried. And that not only fried itself but that took out everything on both sides of it. Ka-CHOW! 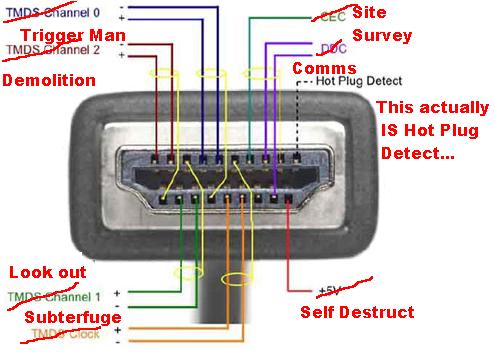 Is this a new phenomena? Is the many stranded cabling of an HDMI cable really just an elaborate sleeper cell of Al Qaeda A/V suicide bombers ready to wreak havoc on the HD viewing habits of The Great Infidel? Any other installers run across weird HDMI path-of-destruction issues?

Reply prentiss gray
4:50 PM on July 3, 2012
As it turns out HDMI cables are particularly susceptible to Lightnings EMP, so Surge suppressors are not much good in protecting devices connected with HDMI cables. Google "Lightning and HDMI", the big AV forums are full of sad stories, I myself have been hit twice, loosing all sorts of equipment. I think th real remedy is to stick with coaxial connections, like component video and older RCA connector audio cabling. They seem to be much tougher when it comes to surges.

Reply Franklin Thomas
2:07 AM on March 8, 2016
I have serviced a high number of equipment failures involving HDMI failures that were confirmed to be the result of lightning intrusion. I find that most the cases were associated with IMPROPERLY GROUNDED RECEPTION SYSTEMS. Your cable/antenna / satellite antenna/ land line phone system/ etc. must be grounded to your BUILDING SYSTEM GROUND ( AC POWER METER GROUND). If the reception systems associated with the home theater components are grounded to a separate grounding system, ( the AC powered equipment being connected to the building system ground AND the reception system connected to a separate grounding rod - - either at your house or ULTIMATELY at your neighbor's house etc. ) , when lightning strikes the earth, the resulting "voltage gradient", as electrons flow through the earth,causes the two separately grounded systems to be charged at a difference of thousands of volts typically. THIS VOLTAGE DIFFERENCE DISCHARGES BETWEEN THE TV EQUIPMENT AND THE RECEPTION SYSTEM THROUGH THE INTERCONNECTING SIGNAL LINE. The sensitive components of HDMI signal delivery SYSTEM ARE PARTICULARLY VULNERABLE TO THIS DISCHARGE accordingly. Up to a point, other signal connection methods will often "survive" 'low level" intrusions while HDMI connections easily fail accordingly.
Summary:
I find the following preventative measures to be helpful, (UNLESS THERE IS A "DIRECT HIT" LIGHTNING STRIKE): (1) Reception Systems must be grounded to the building system ground
( see the National Electrical Code sections 820 and250.94 .) ( Note: If you use an ethernet connection etc. served by a system that delivers the data from an outdoor line feed, that system must also be grounded accordingly ) (2) Feed AC power to all of the components of the home theater / TV reception system with the same "breaker" / AC circuit - - and, at this "common supply point",(3) use a high quality surge suppressor unit ( one designed in a way that not only allows the AC power to pass through it, but all of the serving signals also). (4) If you are not using 1080P, (especially 4K ultra HD ), it would definitely be better to use COMPONENT signal delivery if possible. (5) Try not to use unnecessarily excessive signal line lengths.