So, on to the unboxing!

Today’s episode finds us opening some packages from PS Audio, their PerfectWave Transport (PWT) and PerfectWave Bridge (PWB). I am actually quite familiar with PS Audio, as we do some business with them at CTA. As you may or may not recall, they are the cable manufacturer that Mr. Cooper is oh-so fond of, and make the cables will probably one day be used to tie down all of his belongings to the shopping cart and he wanders the streets jobless and without a home to put all of his $1000 power cabling. So, here are the two boxes: 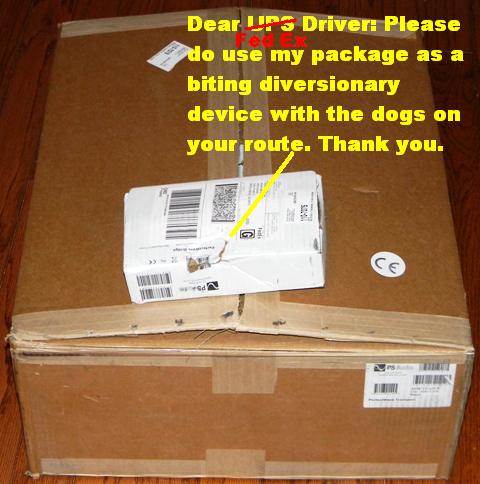 The smaller box has a serious gash in it that looks like it went a few rounds with some Doberman or someone got bored and played a game of knifey-knifey, jabby-jabby on the delivery route. Usually small boxes arrive in pristine condition because they kind of just shuck-and-jive through the delivery chain, but this little fella, he’s been through hell. 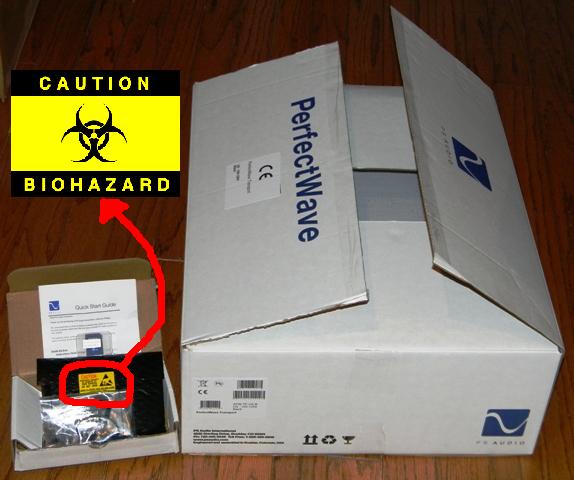 Here’s the gear out of their protective boxes. The first thing I see is this bright yellow sticker. And, well, it reminded me of something. I always knew that reviewing A/V gear was a thrilling and dangerous job! So dangerous that now the gear is coming packed in with yellow safety warnings! Take that, all you people that said I had a wuss job! Sadly, it wasn’t a BioHazard warning. Well, maybe not sadly. I was sorely underdressed for any actual living room, Bio-Level 4 Ebola encounters. And Dana is rusty on her epi-pen to heart jab. 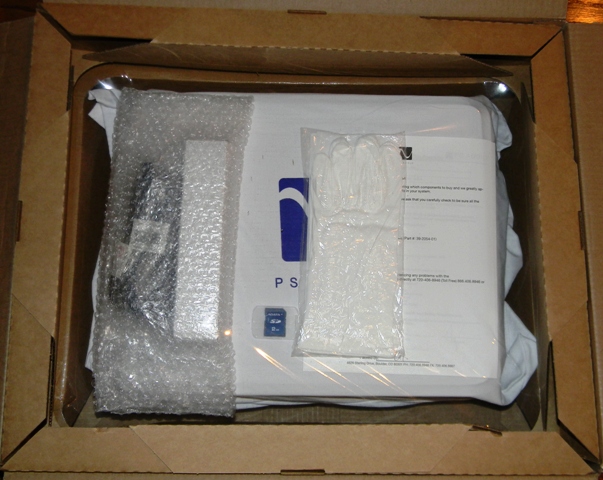 The gear was like Saran-wrap, Han Solo in Carbonite sealed to perfection inside of the box. It was floating in this cushion of wrapping and air and wonder. It was really quite beautiful, like angels dancing on clouds or a perfect memory floating in Lucite. My picture can in no way do it justice, but just imagine a beautiful piece of high-end electronics frozen mid-air in a perfect moment and then vacuum-freshness locked between two, taut, clear trampolines of love and protection.

Of course, I took a long pause to drink in the beauty of the packaging. Then I took another, slightly longer pause to take in the beauty of this 12 year old barrel-aged GlenMorangie that I recently purchased. I’ll not share this unboxing, suffice to say it was amazing and I have continued to unbox it over and over again. Here's my friend Glen and my other friend Glen. 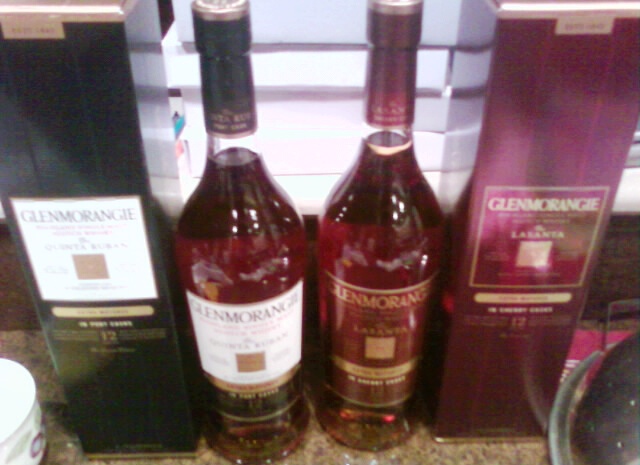 After I’d suitably regained my composure, I went on to removing the wrappings and, pretty typical, remote control, power cord, 2 Gig SD memory card and…wait! What the?! What have we here? 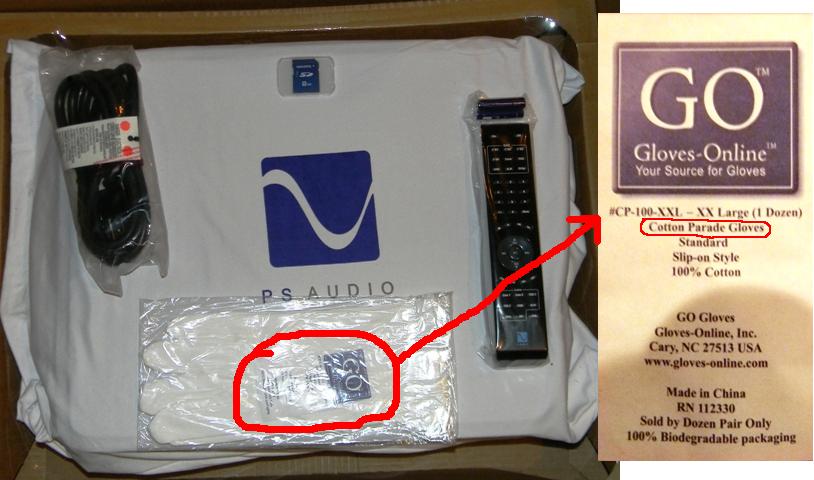 Gloves? White gloves?! Is this literally a white glove delivery! Oh the awesomeness! Oh the sublime perfection! Of course there is just NO WAY that I am going to be able to receive a pair of Cotton Parade Gloves inside of a package and not *immediately* put them on. I instantly felt more dignified and like I should be wearing a uniform or twirling a baton or carrying a rifle at port arms. I might have started speaking in French, I don’t know, time kind of got weird for a second. You wouldn’t understand if you’ve never been living on glove time. Seriously, EVERYTHING is better when wearing parade gloves. I want to walk around finger-glove dust testing things. But in your house, not mine. I want to look at the glove finger and make a disappointed “tsk-tsk-tsk” sound. I want to open the door for people and say, “I’m sorry, the master is unable to see you right now. May I invite you to wait in the parlour?” I want to be on the streets of Paris doing mime. I want to be waving my hands over fabulous cash and prizes on The Price is Right. I want to lay in the snow for hours, covered in a Ghillie suit, looking through a Bausch & Lomb 10x Elite 4000 Tactical waiting for the moment to take the shot. These white gloves have made me want to be a better me!  Also, Darryl Wilkinson wanted me to mention that Go Gloves-Online is a wonderful resource for any recreational medical needs latex gloves as well. He says they are some of the most durable and puncture resistant and lube friendly he’s ever tried. So, thanks for the heads-up, Darryl! 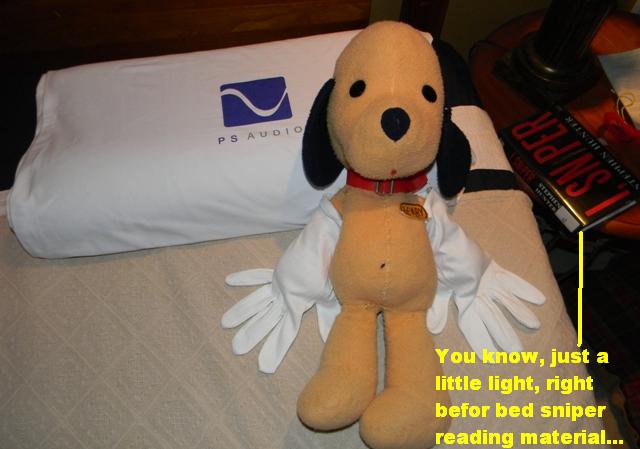 So, of course I removed the cotton cover from the unit and immediately used it as a pillow case – the one on my Tempur Pedic pillow is *really* starting to show its age – and then put the gloves onto my old stuffed animal, Henry. 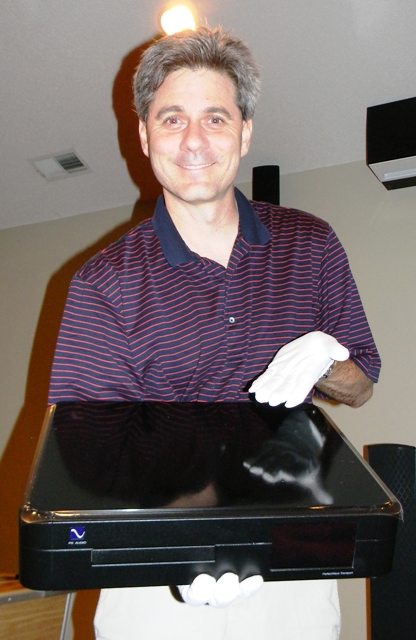 Here’s a picture of me holding the front of the unit. Yes. I realize I look awesome in the gloves. And, yes, I do realize that with these gloves I probably would have been dancing with Pippa at the wedding.

Here’s a picture of the rear of the unit. See how tightly the gloves fit my hands and caress my skin? They are soft yet strong; firm but fair, smooth but powerful. PS Audio, you probably won’t be getting these gloves back. And, um, by the time I finish with them, you probably won’t, uh, want them back... Just sayin'... 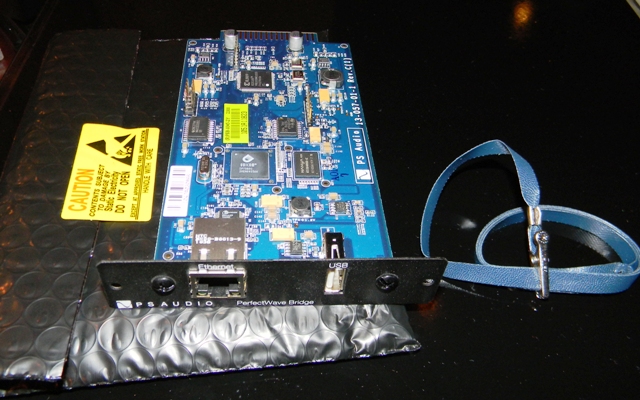 Once everything was unboxed, it was time for the highly technical, potentially dangerous, electro-shock hazardous element of installing the PWB into the PWT. This involved removing the stock, non-streaming card and sliding the new-fangled one in its place. Wearing white gloves, with the anti-static wrist strap and bright yellow WARNING stickers and several glasses of scotch under my belt, I’m not gonna lie...I was feeling pretty much like a total bad-ass at this point. I got the screws out of and had to use the pliers end of my trusty Leatherman to yoink the old card out. Slid the new card in, screwed her down and was ready to rock! (Unfortunately, I totally forgot to clip the alligator clip to the ground post on the chassis, so I was just wearing the wrist strap like a white gloved, semi-tossed jack ass.) 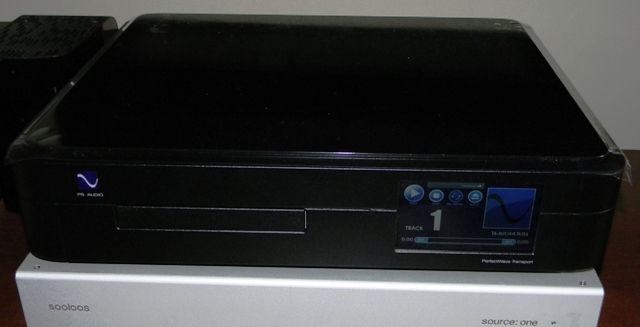 Here’s the finished product. Threw in some Harry Connick Jr. and I must say, my initial take is that this is one sweet sounding transport. Not nearly as rough edged and face-punchy as The Transporter, but more of a sparkly and velvet smooth chauffer driven Bentley ride to sweet audiosville.

Update: So, the system wasn't working right. I plugged a USB drive into the back slot of the PWB that was clearly labeled USB and yet it didn't recognize any of the files. There was no menu or options or choices for selecting anything other than the internal CD player. It wasn't recognizing any of the files on my network hard drives either. No streaming no nothing. So I called PS Audio for a little one-on-one help time. So I'm talking to Alex, the tech support guy, and I'm describing my issues and he says, "So, let's see, you have the Transport and the Bridge and the DAC?"

"No. I don't have the DAC. Just the Transport and the Bridge."

"Wait. You can't install the Bridge into the Transport."

"Yeah you can. I did. I took the two screws out and the card slid out." I left out the part about not connecting the grounding strap and using the pliers.

"Oh, I can assure you that it fits. I pulled the old card out and slid this one in."

"Wow. I mean, it might fits, but it isn't compatible. The Bridge is only designed to work with the DAC. I can't believe that it didn't totally lock the system up."

So, looks like I've got a new DAC coming my way! Anyone know where I can get a new pair of white, unpackin' gloves?

Decided to go get a quick sensual massage the other day. Paid my $110 at one of those cheaper Chinese joints here in Auckland and prepared for my normal session.

What happened next scared and excited me.

One thing led to another and then I found myself massaging and playing with the lady instead. After all if she is enjoying it who am I to stop.
However part way thru this lady went all weird, her face changed , her whole body started shivering badly

Best $110 and one hour ever. But the way the lady went emotional and jumped me was freaky. Wish I could do this everytime with all the girls.