Holy Crap! I think I actually fixed it!

We got a call the other day from a guy that was having some computer network issues. (OK, apparently we got a couple of calls from him. Turns out that one of my guys took down his initial message from the answering machine and then either A) never called him back (the customer’s story) or B) was called back and no one answered (my employee’s story) or C) called back again and got me on the phone and left a message with me to have my employee call him back and my guy never got around to doing it (my story). Either way, a clear breakdown in Custom Theater phone messaging procedure. I know, I know...but I’ve already told you people how I have a love/hate with that stupid phone. Gar! That blasted thing only brings me pain and heartache!)

Anyhow, fortunately he called back again and after we got past the initial, “You people never returned my call!” I decided to have the old, “I’m really sorry about that, but let’s just start fresh all over. Hi. I’m John. How can I help you?” relationship reboot. After a little telephone chit-chat it comes out that this guy is pretty well connected in the industry. (Making the whole phone debacle that much more, um, debacle-ing and embarrassmentish.) He owns a string of Blockbuster franchises, founded a successful custom install company and now runs a pretty major custom A/V distribution company. He says that his old company wired this house and there are some things that have been plaguing him for a while now and he wants to find a reliable, local AV contractor that he can get with that can take the project over and make it all lovey-dovey, and basically start to build a relationship where if something goes wrong, he has a person to call. (A person that will hopefully write down the message and actually call him back. Damn you, phone!)

But the crux of his problem is his Internet. She comes and she goes. One minute she’s working, the next minute she’s not. He’s had Verizon out. They’ve looked at it. They’ve checked the wiring. They’ve checked the connections. They’ve scratched their heads. They’ve changed the modem. And yet, the Internet, she’s still a fickle mistress. One minute she’s wearing a sexy little black dress, sidled up to you, draped over your arm, smiling and whispering dirty little secrets in your ear; the next she’s downed several Cosmos on your tab, taken a bunch of cash out of your wallet and left the building with some other dude. That’s his Internet.

So I explain that Networking is not really my forte, not my bailiwick, not our strong suit, not in our wheelhouse. Pretty much every “the computers aren’t my best thing” line I can think up. And that I would love to be his new AV resource, but if he is looking for someone to *guarantee* that his Internet will constantly be up and running, well, then, I’m not gonna give out that kinda paper. (There are two things I’ve learned to never, ever, NEVER guarantee. Thing 1: Radio reception. Inevitably, you will not be able to get the one station the client cares about. You can build an antenna that is an affront to God, and still they won’t get that one station. And I understand that you get it in your car and on your Bose Wave Radio, and no, I don’t know why this isn’t picking it up. Thank goodness that radio’s popularity is really on the wane. Thing 2: Internet. I can lay the infrastructure, I can have all the wires properly terminated and connected and install and configure a stable network, but some outside source – a solar flare, a chunk of a polar icecap breaking off, some car plowing into a node somewhere – can spring up that can bring your Internets down. I can’t guarantee that MY OWN Internet will work and I’m right there living with it most of the time, so I’m definitely not gonna do the same for yours. In fact, literally while I was writing this, Dana called to tell me our system isn't working; sounds like a major power piece just went to its great reward, taking down like 10 connected components in its wake. So, there you go...)

So I offer him this as a smoke ‘em peace pipe. I’ll come out. I’ll look around. I’ll see what you’ve got. And I will give you a totally honest, no BS assessment if I think my company can make this problem go away. He agrees to the fairness of my terms, and we set the meet for 9 AM this morning.

So I drive out to his house – which is located ever-ever so close to Mr. Brain by the way; like I had to drive past Brain's house to get to this guy's. And I got those watery chills in my stomach like right before you need – NEED – to find a toilet imminently – and he shows me the lay of his land. His structured wiring panel is a mess. It is in bad need of some tear down and rebuild love time. But I start looking through his wire chain and it appears that the DSL lines are wired correctly. They are coming in on separate pairs they are routed correctly through the chain, they go to the modem and then out to his Apple Airport and then hopefully to the WiFis. He is sitting there with his laptop and the Internet is working. Then...it stops. “See! This is what I’m talking about. Why did it just stop? Why?!”

My man is tense with lack of Internets. And I can feel his pain. He says he’s down here just a few weeks a year, and inevitably when he arrives into town, the Internet isn’t working and then he is forced to dealing with some non working Internet issue. “I spent 6 hours – SIX HOURS – with Verizon last time I was here waiting in line at their store to try and get this resolved. That’s an entire day. I just want to pay someone to fix this. I will pay you $100 an hour to handle this for me. Meet with Verizon or Time Warner or whoever, I'll pay you. I just want someone else to deal with this so I can enjoy myself while I’m here.”

While I DO like the sound of $100 an hour for dealing with Verizon or Time Warner – and I can assure you, that is money well earned if you’ve ever had the displeasure of doing it yourself – I want make sure that in doing so I can actually rectify his problem. Plus he’s holding out the carrot of more work – lighting control, house audio fixing, theater work, etc. – if I can pull off the network fix. “I know you can do that other part of it, but I want to find someone that can handle the whole thing.” It’s an all or nothing enchilada covered in spicy green money sauce, and Johnnie is hungry! Ole!

But Johnnie is also careful. How long has that enchilada been sitting out and did they wash their hands when returning from el bano? This is the kind of situation that one can *easily* become married to, and not in that good married way. More like a Britney/K-Fed marriage. And I don’t want to get an 11 PM, “My daughter is at the house and says her iPad isn’t connecting to the Internet and there is some new meme on YouTube of a monkey urinating on itself that she HAS to watch! I need you to FIX THIS!” No. That I don’t want.

So I decide to explore a bit, to gently pull back the veil of his network to have a little look-see. So I have him pull up the available networks and what appears is one called Verizon. And yet, he says that he is connecting to the Apple Airport WiFis. So I disconnect the Airport and power it off. And the Verizon WiFi is still there. But no worky. Curious. So I ask him to connect directly to a port on the Verizon modem/router. And, no joke, he pulls out this piece of Cat5 cabling that is like 12-inches long. It is like the smallest Cat5 jumper ever. Oh, and did I mention that the modem/router is just lying on the floor? No? Well it is. So he plugs it into his router and sets his computer on the floor directly next to it as dictated by the world’s smallest cable and he goes about working on his computer in a position that would be totally sexy if he were, say, a woman, but which is just kind of totally uncomfortable since I am standing behind him looking down over his shoulder at the screen.

Anywho... With the computer connected directly to the router, the Internets come back on line. Disconnect, they go away. I have a theory, a hunch, a niggling of an idea. I’m like Columbo working a case. I want to walk towards the door and then spin around and say, “Oh…there is just one...more...question...” right before I drop the atomic bomb bit of evidence on him. My theory is that the WiFi part of the Verizon router is bad; it appears as a Network with all the bars and everything, but it’s gone insane. But since the Apple WiFi Network is under the same name, the computer occasionally hops back and forth between them. They’re so close together in physical space, maybe one is a micro-decibel stronger or whatever. (Look, this is a hunch I’m working.) When it’s on the Apple WiFi, Internet worky. When it jumps to the Verizon WiFi, Internet no worky. It feels right, though, right? 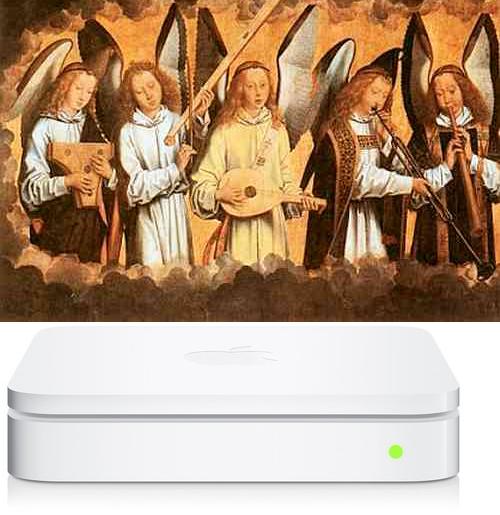 So we log into the Apple, give it a different name, reboot the Network, connect to the new Apple WiFi and...by God, I think I’ve actually done it! A chorus of angels might have burst into song! I’m trying to act cool like, “Yeah, fixing things that have baffled others for years in under an hour...it’s just kinda how I do,” but on the inside I’m all jumping up and down. My inner Rocky is giving out a serious, “Yo, Adrian! I did it!” I could see serious conflict on my man’s face as well. On the one hand, I think he wanted to hug me and just hold me for a bit and then open up some sweet and rare bottle of scotch he’d been saving for some momentous occasion and possibly even setup a backyard luau – with WiFi – to celebrate my accomplishment. On the other, he had the wary look of someone who’s loved and lost, who’s been promised the world only to see it disappear...only time and days of working WiFis were going to fully heal this wound.

But, it was enough to prove my mettle and get us a date to come back and do some more work on the house, which is nice. And, as I mentioned at the front, this is the kind of connected guy that would be a real snap to know! #Success