There is magic. Just no Magicians

One of my great, lasting takeaways from living at the Parker House in Berkeley – a large home not far from the Cal campus, within short-short walking distance of Telegraph and its steady stream of panhandlers and cool clothing/book/music/food shops to the north and Shattuck to the south that had 8 rooms plus a top-floor loft that served as communal housing for multiple college kids and my friend Dan – besides being the place I lived where I met Dana and had our first date (and actually got into a car wreck about two blocks from my house on the prophetically named Dana Street) and where I learned that pretty much all of the Hamburger Helper’s taste the same and that Tuna Helper is only going to produce a horrible smell that will then alienate your other housemates was a love for independent and foreign films.

Every Tuesday night, all of the campus-area theaters -- like 10 of them -- would run $2 Tuesday and you could see nearly any film for $2. It was a great way to experiment with some choices that you would normally take a pass on and I stumbled across some great movies that I probably would have never given at chance at $8 a go. Films like Flirting – where Thandie Newton is just oh-so-perfect! And if you ever wanted Mr. Keeting to be your teacher in Dead Poet’s, then you every bit as much wanted Thandie to be the one waiting for you at the girl’s boarding school across the lake – Indian Summer, The Player, A Midnight Clear and countless others. (Of course, I also saw more than my fair share of celluloid atrocities; movies that were not just bad but damaging on a moral and spiritual and possible even genetic level, several of which you can read about here in my 10 Worst Films list.)

One of the movies that I remember talking my faithful $2 Tuesday companion, Pierre, into seeing was a French film titled Tous les Matins du Monde, which sounds a lot like Too-lay maTAY do-Moan-duh and translates to All the Mornings of the World. (Pierre was a great and mostly willing companion and, because at some point we developed this pre-movie tradition of having a putting-green putt-off prior to the film where the loser had to pay, and, well, since I WAS a golf pro, it pretty much meant that I never had to pay. And then the one time he did beat me – at darts or shuffleboard, I can’t remember – and I had to buy – drinks this time, not a movie – I went up to the bar, ordered two I-don’t-care-how-gay-it-sounds-'cause-they’re-so-totally-delicious Dry Pear Ciders, slapped down a $10 and then took back my two drinks along with the two $5s the bartender gave me in return. I remember Pierre saying, “It’s just not fair; even when you lose you win!” Ah, good times...) The wanna-be civilized, inspired to seek culture from my nuts-and-berry-and-granola eating and soy drinking housemates was attracted to the baroque style, cello music and I can totally remember the dramatic, movie-voiceover preview guy talking during the multiple previews that we saw leading up to it. “Starring Gérard Depardieu as Marin Marais. And for the first time, introducing his son, Guillaume Depardieu as the young Marin Marais...”

Couple this with Amelie – possibly my favorite foreign film at this point, maybe like 60% because it has a very quirky, cool style, 76% because it was a really good movie but like 114% because Audrey Tatou is just oh-so-perfect; quirky, smart, funny, clever, and with the cutest short-haircut and mischievous smile – and it is fair to say that I have a soft spot in my heart for French films.

One studio that seems to consistently put out quality independent films is Sony Classics. In the past we’ve enjoyed The Counterfeiters (based on the true story of Nazi prisoners forced to counterfeit foreign currency during the war), Coco Before Chanel, Crouching Tiger, Hidden Dragon, An Education (with a Carey Mulligan in her absolutely deserved career launching role) and Run Lola Run. And already delivered and waiting from the Netflix queue is Another Year, a British film that promises to be filled with terrible teeth and awkward Weetabix dry humour. So when you combine foreign, independent, French, Sony Classics, Netflix and Blu-ray, throw it into a box, jumble it all together and then dump it out, what you get is...The Illusionist. 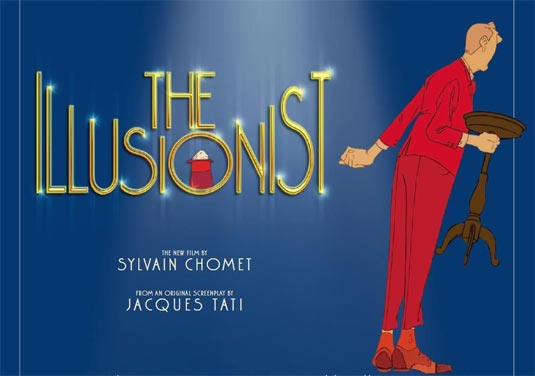 Even more intriguing was that The Illusionist was nominated for both the Oscar and Golden Globe – among other foreign nominations – in the category of Best Animated Feature, and it had a really cool, hand-drawn animation style. Plus, I like magic, so it seemed like a win all around. Now normally I find that I’m only setting myself up for disappointment when viewing some major studio’s latest animated attempts because they all come up so far short of what Pixar has to offer and more seem to pander to double entendre humor that is just outside the bounds of children’s understanding while simultaneously catering up their fair share of fart and poop jokes. (And with none of the class and style of, say, a Dumb and Dumber.) Dreamworks has had a couple of decent efforts, and Disney, of course, is a staple, but Pixar has established the benchmark and every film just continues to be a graduate school level event in what not only an animated movie should be, but just what makes a great film period.

So we start watching and the first odd thing is that the subtitles just don't seem to be working correctly. There is the subtitled for the hearing impaired titles which have these constant pop-ups like “Music is playing,” “Sounds of a car driving over gravel,” “A man is whistling.” You know, things that would be great if you were deaf but which are otherwise just megalo distracting. The other set of subtitles – which we were hoping would translate the French and Gaelic dialog for us – actually ONLY print the English words. And, uh, little piece of advice here, Sony Classics. I don’t need you to tell me what “Hello” translates to. I’m squared away on that. Fortunately there is very little dialog in the movie, and since the two principal characters can’t actually communicate with one another, they do a lot of pointing and gesturing and so it isn’t too difficult to figure out what is being implied.

(Some Illusionist spoilers coming if you care to see the movie and you’re sensitive to being spoilered...)

While the movie is visually interesting, and the animation style is cool and kind of a refreshing break from all of the photo-realistic computer animation in every other animated title these days, the story was pretty slow and plodding and just fraught with hurt and despair and depressingness.

First, the Illusionist is an older guy at the final stages of what appears to have been a pretty disappointing and lackluster career even though he is obviously a pretty awesome sleight-of-hand magician. He’s ended up performing in small, dead-end venues to crowds of just a few people that are wholly disinterested in his act. So the movie follows him around as he gets fired or flops at venue after venue while he is wandering about looking for that next job and meager paycheck. His only companion during all of this is a borderline vicious rabbit that seems less like a willing accomplice during performances and more like prisoner that looks for any opportunity to try and bite and escape.

Our man makes it to Scotland where he is a giant hit with the locals. But instead of savoring in the success and staying and rocking it out like a superstar, he decides to leave and return to the nothingness of his life. Except this young girl that was the housekeeper or something where he was staying follows him and attaches herself to him even. She doesn’t seem to have any family and where this could have turned out to be a Natalie Portman The Professional situation – except without the weird milk drinking fetish, killing, the crazed Gary Oldman dirty cop and the totally uncomfortable and creepy and sexually disturbing and I-know-she’s-only-like-11-and-totally-not-supposed-to-be-sexy-but-dammit-man-she’s-STILL-Natalie-Portman! dance scene – it doesn’t. Instead the girl just basically gets the magician to buy her all kinds of clothes and stuff all the while he is struggling and sleeping on a couch and whatnot.

Throw in some other vaudeville type performers – clown, hobo, ventriloquist – whose lives are falling apart, contemplate suicide, pawn their goods, go without food and live on the street, etc. Our magician is forced to take menial jobs like working in a car garage or performing in store windows and other stuff to try and make extra money to continue buying baubles for the girl.  The movie concludes with the guy seeing the girl out on a date with some young man on the street, he goes up into the hills and releases his rabbit, and then he leaves a note on the table for the girl and he just disappears. We see her open the note and it says, “There are no magicians.” And...Fin!

Yeah. Kind of a giant let-down bummer. Maybe that’s life, but it certainly wasn’t entertainment. Foreign films can definitely be like a box of chocolates; and sometimes you get that weird, fruit and nut filled one.