Damn! We've been robbed! And the DVR says...

You want to know the call that you DON’T want to get at 7:56 in the morning on your day off? When you went to bed late after drinking that I-know-I-shouldn’t-but-I’m-going-to-anyhow second Manhattan? It’s the one where your installer blurts into the phone, “Dude! We got robbed! The back windows are smashed out of both the vans!”

“Yeah. I just got here. Both the back windows are busted out, there’s a big hole cut in the fence. We’ve already called the police.”

“A bunch of tools and drills and one of the laptops.”

Damn! And just like that your day is simultaneously started AND ruined!

Getting broken into just sucks! I mean, beyond the time and hassle and obvious loss, it is just the whole violation thing that someone was going through your stuff. Second, forget the tools; that laptop has information that is likely FAR more precious. Our laptops have HUNDREDS of client remote programming files on them that represent YEARS worth of invested time and effort. And we have like 300-plus hours of programming from this one on-going Crestron job one of our laptops and I don’t know its current state of backed-up-ness. Short of knowing that one of the laptops has been given the primary mission in life of making this system work, I’m fairly removed from the loop on that project. But this is potentially catastrophically bad news.

In our store’s history this is the second time that we’ve been broken into. (Third if you count our mentally challenged ex-employee that stole a Pronto from our back room and then went down to a pawnshop to pawn it without realizing that the pawnshop owner was a long time customer of ours. Who immediately us. “Ya’ll got one of yer employees here tryin’ to sell me a remote control.”  You really-really dumb. For real.) The first time was a about 5 years ago and was a total smash and grab affair; they busted out the glass of our front door, ran in and grabbed a 37-inch Sharp TV (yet neglected to grab the accompanying control/scaler/tuner box needed to make the TV actually function) and a Bose Lifestyle 38 head unit, but not the speakers that go with it. They also broke into the vans that were parked out in the front of the store and stole a bunch of tools. They also cut themselves and bled on our carpet, leaving behind DNA evidence that ultimately helped to convict them! CSI-Myrtle Beach, baby! 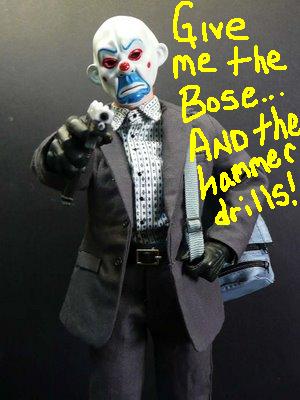 When the cops came, they saw a bullet camera on the wall pointing at the front door and turned to us hopefully. “You have a camera, huh? Great. Let’s take a look at the footage.”

Except, well, not at all great. The camera was just part of our store’s video distribution system and was only used to put an image on our touchpanels to display what a camera at your front door *could* do. Nice. And totally useless.

So following that little debacle we decided to get more serious with our security. We installed a chain link fenced-in area behind our store that had a padlocked rolling gate where we parked the work vans. We put barbed-wire atop this gate. We put floodlights out there on motion sensors, and two video cameras. We added other cameras around our store and a DVR to record all of the action.

And we told all of our employees: DO NOT LEAVE ANYTHING IN THE WORK VANS!

And now we have a monitor in our office that constantly displays four images from our camera system. At any given second in time I can glance up and see the side of our building, our back room, the front door and the front of our parking lot. What I CAN’T see is the cameras that cover the van area. Cause, well, I don’t need to see that during the day and it’s just generally like staring out into a gravel pit when the vans are out working. Except less exciting than an actual gravel pit.

What this means was that since I never have reason to flip the monitor over to look at the van storage area cams, I DIDN’T know that one of the cameras had stopped working at some point. Isn’t that awesome? Bad power supply? Ruined by the weather? Shot out on the high seas by a team of SEAL 6 snipers? Who knows! Just know that when we went to recall the video for the cops, what we saw instead of an unfolding real-life crime drama was just a big, black block on the screen.

No problem though, right? We’ve got another camera out there covering the van parking from a different angle. Go over to that feed and watch a slow-moving nature drama of a spider spinning a web right in front of the camera. There’s little Charlotte, working away, spinning out “Some Pig!” and “Terrific” and “Hey! You’re being robbed!” All we can see is the movement of flashlights and the knowledge that we got robbed from 2:26 AM to 2:58 AM. And it is all grey and murky like trying to look through a glass of milk-residue-water. Perhaps that is beneficial from an instructional perspective, say, if you are doing a thesis paper and needed some hard research figures on robbery start times and durations. Otherwise, pretty frickin’ useless!

This isn’t the first time I’ve been foiled by a DVR system. Long-term readers may recall (or click on the link...) that I once drove up to a business to help the police retrieve some video of a parking lot break-in from a DVR that we installed at a high-rise complex. Got there to discover that the DVR had locked up some months earlier and hadn’t been recording a damn thing. Which is just what you want to tell the HOA manager and Johnny Law. (This actually did ultimately have a happy ending; they learned to monitor the system and check to make sure that it was actually recording and months later we returned to help them retrieve some video of a drunk and belligerent woman spraying the building president in the face over and over with a hose!)

Ultimately we lost what we think is around $8500 in stuff. Drill bit bags filled with tons of drill bits (the expensive, weird stuff you accumulate for those odd jobs like, say, drilling out highly-pressurized concrete at Fort Bragg), two hammer drills, right-angle drill, several handheld cordless drills, flashlights, batteries, walky-talkies, plus the computer and laptop bag filled with all manner of miscellany. (But, thank God, NOT the Crestron program!) Not to mention the time and soul withering aggravation of dealing with insurance and having to go buy all new stuff. Plus do you have any idea how impossibly hard it is to find a laptop with an actual DB9 serial connection any more?!

The takeaway? Back your laptop up. Even if it doesn’t take a dump on you, you never know when all of your stuff might vanish. Check your cameras on a regular basis; even the ones you think you don’t need to monitor. Check them in different lighting conditions too. Just because they look good at high noon – statistically what I’m guessing is the least likely time for a robbery – doesn’t mean they’ll get the goods when the sun goes down. If you see cobwebs around your cameras, clean them up and give a liberal dose of Raid to the infected area. Regularly check that your DVR is on and actually recording. AND FRICKIN’ DON’T LEAVE ANYTHING ON THE WORK VANS!