Warning: Your system is in danger!

Usually, when you get a warning, you, like, I don’t know, follow it or something, right? Like the train crossing thing is all going ding-ding-ding or the weatherman saying that you shouldn’t go outside today because of heightened chances of radioactive acid rain or that weird writing that is on the fogged up mirror when you get out of the shower. Whatever.

But, if someone called you up and said, “I’ve been monitoring your computer, and your hard drive is about ready to go AWOL. And it’s gonna take all of your data with it. Just a friendly little heads up! And it will cost you like 3.5% of your original purchase to make sure you don’t lose anything. Cool?” Chances are you’d probably be all, “Oh, sweet! Thank you SO much! If I lost all of my data I’d die, I’d just…DIE!”

So, I got the equivalent of this Minority Report pre-crime warning in the form of an e-mail from Kaleidescape’s tech support on Monday. 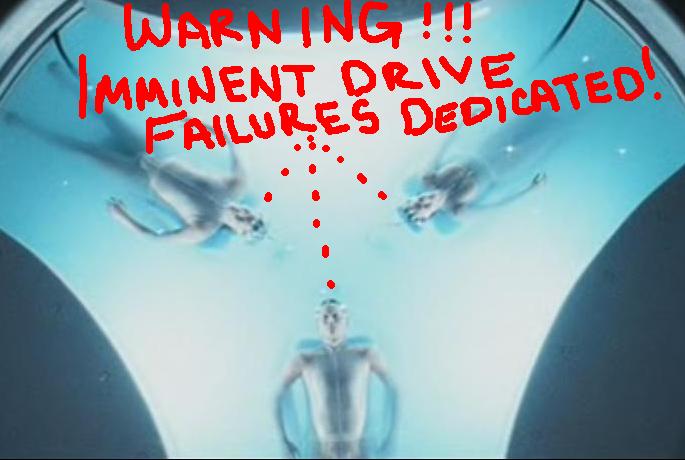 The message said that one of our client’s systems was showing abnormally high errors on not one but TWO of his hard drives. Kaleidescape monitors their systems for optimal performance because generally in-ALL-cases people that have purchased Kaleidescape systems have a SIGNIFICANT amount invested; not only money invested in the components but -- most importantly – the precious-ness which is the data that is ON those drives. So when an anomaly is noticed – running too hot, a system that stops reporting in, or a disk drive that exceeds error thresholds – and flagged by the Mother Ship, Big K reaches out to a dealer to get the situation handled before the situation turns into a problem which can then turn into a crisis. You know, the whole Fear leads to anger, Anger leads to hate,  Hate leads to suffering shame spiral.

Now, because the Kaleidescape system use a RAID (Redundant Array of Independent Disks) storage system, that means that ALL of your data is striped across the drives and if a single drive is lost, it’s no problem; because those other drives are gonna just keep on chooglin’ like Proud Mary. (I’m sure I’m greatly simplifying this and somewhere a storage engineer just had a small bloody-nose-rage-stroke, and I apologize.) (Also, I should point out that on bigger Kaleidescape systems, you can lose up to THREE drives! So, see, I was paying attention during all of those product briefings!) Because the chances of two drives failing simultaneously is probably just as statistically unlikely as me ordering something from a telemarketer.

But, oh, sweet baby Jesus, IF you’ve got the kind of luck that has that chunk of Space Station falling from the sky and landing on your head and you should lose not one but TWO drives! Oh, lord up in heaven, looking down on your children, so foolish and wandering about all lost and water-headed and not knowin’ which way to turn, should you lose TWO drives, well, it’s game over. All hope is lost. And, along with the hope, so is your data. And it’s not gonna be gentle like you lose just your collection of Ronco Disco Classics from the 70s, or your wives entire list of British Period Films. Oh no. And it won’t be like you lose a third or a half and you can still salvage *something*. No, baby. You lose both drives, now you got pain in your life, cause you lose the whole shootin’ match.

So, as you can imagine, losing two drives is the worst case, to be avoided at all costs, nightmare scenario.

Now, keep in mind that we are talking about a system that this client originally spent $22,250 on. So, you know, keep that figure in the back of your mind. So I reach out to my customer. I explain the situation about the drives failing and the concern and how we’re trying to head it off and all this and he asks what his options are. I start with what I feel is the most sensible option; replace and upgrade.

“Well, we can replace all of your drives with newer, larger ones that will almost double your storage capacity – you are at 99% full now and can only add like one more movie – and this will give you the ability to add more to your collection and have a year warranty. They offer an upgrade promotion on replacing a defective drive and the new drives would be $800 each and you’d need three of them.”

“Well, we could replace all your drives for similarly sized refurbished drives. You don’t gain anything but you get another year warranty. Those drives are $200 a piece and you’d need four of them.”

“Hmmm. My circumstances have changed and now that’s still too much. What else.”

“Well, what if I just do nothing?”

“Yeah. Like just wait and see what happens. What will happen then?”

“Well, the drives will eventually fail and then you’ll lose all of your data. All of it.”

“When will that be?”

“There is really no way of knowing. The goal is to always try and head that off before it happens.”

To me, this just SCREAMS of driving your new Ferrari around, watching that needle just climbing up into the red zone, hearing all those sweetly-tuned valves and cylinders singing their beautiful, sonorous chorus, all-the-while knowing that it desperately needs an oil change. But instead just deciding to put it off until that one eventual day that the motor blows up. Except the mechanic is pleading with you to, “Please-a! Bring-a in-a the Ferrari! Let-a me-a repair-a my baby! She-a needs-a me!”

So I tell him that I understand but as a general CYA, I tell him that I’m going to send him an e-mail re-explaining everything I just said and ask him to respond to my message saying he understands the eventuality of his decision.

“John, what if I do nothing, and the worst happens and lose everything. What are options then?”

“Thanks John. I understand the options, but I will see how long things last. If and when the hard disc faults, I will do something then.”

Reply frobnitz
9:06 PM on August 1, 2011
Wait a second... this 'precious data' you are referring to is just hard disc copies of movies and CDs so the user doesn't have to load discs? Hahahahahahaha.... I thought it was something _important_, like WORK. Couldn't the end-user revert to manually loading media? It's so 20th century, I know... but it would save him $1000. Where I come from, that still a lot of money.