As I mentioned over the weekend, I succumbed to the subtle yet insistent pressure of not owning the most up-to-date, latest-greatest version of the Star Wars films and I broke down and contributed another $80 to what I like to think of as “The George Fund.”

Honestly, though, I don’t begrudge George this money. Star Wars played such a massive part of my life growing up, from viewing the first film – back when it was just Star Wars and none of this Episode IV stuff -- in Carmel in 1977, to breaking down and throwing a crying jag in 1980 when my dad said that we wouldn’t be going to Empire on opening day, to leaving school early in 1983 to watch Jedi with my best friend at the time, Scott Gaede. To seeing all of the original Trilogy re-releases as well as the new films on opening day. This doesn’t count the collecting of figures, the rooting through trashcans outside of stores to get more Proofs-of-Purchase to scam more free Bobba Fetts, or all the hours of  playing “Star Wars” with the huge collection of figures, or then later riding over and jumping same figures on my bike. (If only 41 year old John could talk some sense and proper long-term toy preservation care into 10-13 year old John...)

So, I don’t begrudge George his money or his success. In my opinion, I can afford to give it, his movies have given me years of pleasure and memories, and he has fully earned it.

One thing though that I can recall in all of the episodes and editions and versions of Star Wars that I’ve purchased…I often find that I am eager to BUY them, but then don’t often get around to actually WATCHING them. I know I watched A New Hope from my Laser Disc collection, and I think I watched several scenes from Empire, but don’t know that I ever even spun up Jedi. Ditto with the DVD discs. Up until I imported them into my Kaleidescape server, I’m not sure that they ever even left their protective cases.

Frankly, that’s pretty sad. Why go to the time and expense of buying it and owning it if you never actually bother to view it? So, the first thing that I did when getting the new discs home – after I imported ALL NINE of them into my Kaleidescape; a process that took like 12 hours – was to sit down, fire up my 60-inch Elite and take a look.  And here are my initial thoughts... 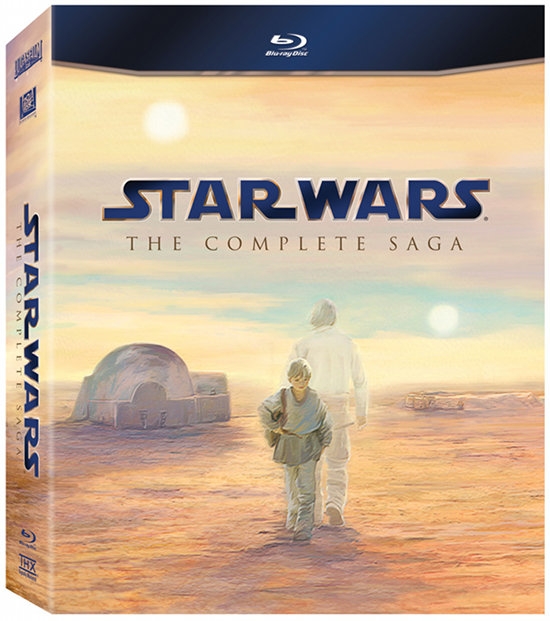 First, visually the original Trilogy looks simply stunning. Yes, the prequel Trilogy also looks great, but the improvement in quality there isn’t nearly as dramatic. These films were also basically pristine digital copies to begin with, so they don’t have the night-and-day quality improvements of the 30-plus year old titles. The picture quality on these original titles is SO good that it is seriously better than many modern Blu-ray titles. This is without a doubt the BEST that Star Wars has EVER looked. I would say the best it probably WILL EVER look (I’m sure he’ll re-release the Blu-rays in 3D format, but I can’t see that improving the picture quality), but I have NO DOUBT that if 4K catches on, George will be there with a new pressing. And, well let’s not kid ourselves; I’ll be there too. Detail is so good that you can clearly see the texturing in the stormtrooper’s and Vader’s helmets and lots of fine detail in cloth and in the actor’s faces, scratches on the lightsabers, etc.

The Cantina scene appears to have been restored/trimmed so that Han shoots at exactly the same time as Greedo. It is no longer a lame, shoots back, reactionary shot, but that they both shoot at the same time. This should pacify some viewers from the SE changes.

One of my VFX peeves was always Obi-Wan’s lightsaber in the end fight scene with Vader. His saber appeared to flicker in-and-out like it was losing electricity or crystal power or Force juice whatever. They corrected some of this, so it looks more saber-ly throughout the fight, but it’s still not perfect. His saber looks more animated in parts, but still better.

The turret cannons and close-ups of the Death Star in the trench approach of EP IV show an amazing amount of detail. You can practically tell which division of the Empire Steel Welders Union installed the rivets.

R2-D2 still looks black in the X-wing fighter in space battles at end of EP IV. Maybe George has explained the reason for this, but it still seems like a continuity error and I’m surprised they didn’t blue-him.

The Death Star blowing up has terrific audio with deep, powerful low bass and an explosion ring/shockwave that travels back the entire left side of the room.

The single largest blasphemy of the entire Trilogy – Bobba Fett screaming as he falls into the Sarlacc pit – has still not been rectified. Neither has the slap-in-the-face burp that follows. I hated this part in 1983, and have hated it in every release ever since. I really hoped that George would go back and right this – Bobba should go off to death, stoically, fighting the whole way, not screaming like a woman! -- now that it is clear what a GIANT fan favorite Bobba is but, no.

I’m not sure if they changed it or if it is just the higher resolution, but I noticed that the Sarlacc mouth/head/biting thing looks almost EXACTLY like the Audrey II plant from Little Shop of Horrors. And, I don’t mean that in a good way.

Another example of the greatly improved, high-res audio is the clearly audible Foley and other small sound effects hears throughout the Obi-Wan and Jango Fett fight in Episode II. All the little metal-on-metal and grabbing and running sounds are far more identifiable.

There was always this weird, totally distracting black spot, chunk of digital noise on the Emperor’s hood when he was sitting in the spaceship at the end of Jedi. This has been cleaned up and corrected.

While I can see how whole addition of Vader’s “No…NOOOOOOOO!” to Vader’s climactic chucking the Emperor down the chute thing would add some full-circleness to his whole “NOOOOOO!” yell when he found out that Amidala died, I still think it is totally unnecessary and just SO un-Vaderlike. Especially the first, “No,” as it is a quieter, more pensive, thoughtful tone that just sounds weird.

While there are 3 discs full of supplemental materials – and while that sounds like A LOT – there is still a TON of stuff missing from prior releases. I had thought that this would be the definitive version of Star Wars, including the most comprehensive special materials and documentaries and fluff pieces ever, allowing owners to ditch all of their other versions in favor of sweet-sweet Blu. But, no. In actuality, it doesn’t appear to include ANY of the previously released Special Edition special-ness. Basically, it looks like all of the bonus disc stuff from all of the other releases has been completely left off, meaning that if you like watching docs and like to get your full, many-hour, Star Wars freak on, don’t ditch your old double-disc sets.  It doesn’t have the “Within a Minute,” “The Chosen One” or “Stunts of Episode III” docs from the Ep III's second disc. Doesn’t have “Puppets to Pixels: Digital Characters in Episode II,” or the “Films Are Not Released: They Escape” sound doc from Ep II. Or the hour long “The Beginning: Making Episode I” doc. Or the terrific “Empire of Dreams: The Story of the Star Wars Trilogy” or “The Birth of the Lightsaber” docs from the original Trilogy release. Or a bunch of the other little featurettes from these previous releases. Now, maybe these are Easter Egg’d somewhere on the discs, but they aren’t readily apparent or mentioned.

If you’ve made the plunge and had a chance to view any of the discs, love to hear your thoughts. What changes do you love, and which ones do you loathe?

Loading...
Reply Richard Fregosa
3:55 PM on September 21, 2011
I plunked down my 80 bucks yesterday, and will be ingesting the entire blu-ray awesomeness this weekend. Additionally, I'll be holding on to them until my 1 year old son is ready to be indoctrinated into the tribe, I'm giving him 2 years tops before we have our man moments.

I'm glad that it's somewhat been modified to a quick draw shootout in the Cantina, but I will in my own Zapruder-esque fashion pull out my VHS copy of Episode 4 to teach my son the important lesson that Han shot first...

These are the important lessons to teach our children.... screw that readin', writin', rithmatic' crap...