I love watching movies. Dramas, action, suspense, sci-fi, comedies, animation, romantic, foreign...really, pretty much anything. And I truly believe that nothing improves the movie watching experience like having a home theater system. We (OK, this must be the “royal We” because Dana really had NOTHING to do with driving this decision) made a big upgrade to our system a few years ago, and I still love and enjoy it every time we turn it on. We use our front projection system (Marantz projector with Panamorph anamorphic lens and Draper dual aspect/masking motorized screen) about 2-3 times per week watching Blu-rays that we rent from Netflix. (At least for now. I’m watching you, Reed Hastings! One more e-mail misstep and I’m seriously going to jump ship. You’re just lucky you’ve got the best Blu-ray selection around and that I have a blood oath to never go back to Blockbuster! Tread lightly, sir. Tread very lightly...)

And while I proudly proclaim that I am a home theater snob, and that my system is admittedly pretty frickin’ state-of-the-art with 9 audio channels (surround back AND front height, thank  you very much!), a Def Tech subwoofer originally designed for a church cathedral that takes bass to the very limits of bowel liquefaction (but, you know, in a good way), and a Kaleidescape movie server it doesn’t HAVE to be that high-end to make movie watching more enjoyable.

As with many things in life, home theater is one of those things where you both A) get what you pay for and B) SOMETHING is better than NOTHING. Get yourself a decent-sized (50-inch plus, but bigger and better. And NO, you can NOT go too large. In the YEARS that I have been doing this, I have never, ever, NEVER had a client say, “Gee, I really wish that we’d gone with something smaller…” When in doubt, get the bigger one. In fact, scratch that. Just get the bigger one.) screen and even a modest surround receiver and speaker package and enjoy movie watching like never before. Seriously, make a $2-3000 investment in your entertainment system and you’ll never regret it.

But, let’s say that you really don’t care that much about movies. Like at all. And you think that surround sound is just a bunch of loud noise and racket and that if you could wrap up all the bass into a big ball, you’d laugh a pleasant little laugh while you chucked it straight into an incinerator. All you really want to do is hear your weather channel forecast on the 8’s and your Matlock dialog. But lately you’ve noticed that that isn’t getting any easier. The answer? 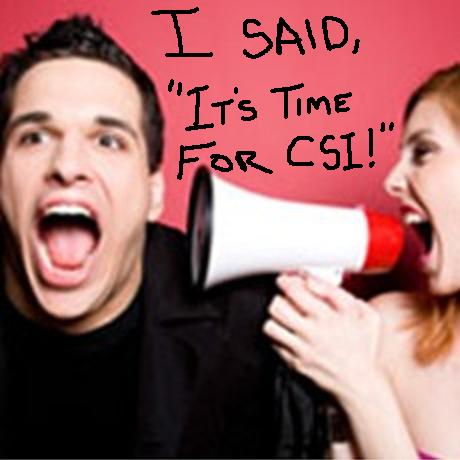 With three exceptions, when you are buying a TV, you’re buying it for the picture, not the sound. (Exception 1: Certain Bang & Olufsen TVs. These things have some real audio. Of course, paying for this is going to feel like passing a money kidney stone. Exception 2: The Mitsubishi Unisen models. These are one of the RARE sets that were actually built with improved audio in mind. Paired with a subwoofer, they have some amazing TV audio. Exception 3: The Bose Video Wave. Again, a TV built around better sound. Granted, an incredibly, mega, super overpriced TV with way underperforming video specs and a fair audio system with a bizarre, proprietary remote control that could all be purchased cheaper – and WAY better – by going a la carte with different brands, but a decent sounding TV nonetheless.) So, barring those three things, TV = sucky sound.

2    Modern TVs have even suckier sound.

It’s true! As TVs have gotten thinner and thinner, the speakers and amplifiers have had to get smaller and smaller. Now many sets actually have speakers in the BACK of the TV firing sound AWAY from you and often straight into a wall! It’s true! And in case it needed saying, that ain’t a good thing!

This is especially true for movies, be also for almost all big TV shows (think primetime) and network/ESPN sporting events (think crowd noise). When all of these multi-channel elements are mixed back into two-channels, the levels can often be weird, meaning that these noises that should be ambient sounds behind you or off to the side can drown out the dialog.

So, here's a true story. A few days ago an elderly woman called our store. She said that her husband’s hearing is totally shot but he won’t admit he has a problem, refuses to get hearing aids, and all he does is complain about how he can’t understand CSI. (Which CSI, I’m not sure. I understand there are like 64 different CSIs on at any given time, and maybe some are recorded worse than others. Don't worry, the exact CSI will not play a bearing on our story.) So she wants to know if she can come into our “audio lab” to see if we can test his hearing. I explain that we don’t have an audio lab per se, but that if they will come in, I can demonstrate a few systems and some options that I think might be very helpful.

So they come in and I can see that Mr. Deaf is REALLY not down with this whole experiment. He is not engaging me, he won’t sit down when I offer him a seat, he is standing back behind his wife looking at the floor. Pretty much all of the classic, “I’m totally not interested in you, John. In fact, if I were smoking, I’d think about walking over and butting my smoke out right on your chest!” signs that I have become quite adept at recognizing over the years.

I finally get them to sit and ask him to describe what his listening difficulties are. He says that the background noises in shows are too loud. Things like cheering crowds when he is trying to watch football, or birds chirping during golf, and that infernal dialog on CSI when people are trying to carry on a conversation while other people are shooting and car chasing and otherwise carrying on! And raising the volume to understand the dialog just makes it worse, because everything else becomes louder as well, just exacerbating the problem. But now everything is louder so that it pisses the wife off.

The wife says, "If we can't hear what they're saying, why are we even bothering to watch at all?" It's a compelling argument to be sure, but I decide to let it be. I am not here to discourage TV viewing. No, sir. People don't come into my Custom Theater and Audio showroom for the villification of TV or to hear me espouse the benefits of things like reading and not TV watching. Not on my watch they don't!

I explain the three problems with TV audio I listed above, then tell them that I want to play a movie clip for them – a dining room scene that is heavy on dialog but with a lot of little, ambient background chatter, from My Best Friend’s Wedding – a few times, changing the playback system each time. (Hey, maybe I do have an audio lab after all! If anyone wants to call me doctor, I’ll allow it.)

First, I play it through just two speakers. Like his TV audio, I explain, but better because the speakers we're using are better. “How was that?”

“Not good. Could barely understand what they were saying.”

Next I played the same clip again, same volume but this time with surround processing engaged and playing through 5.1 speakers. “How was that?”

“A little better. But all of that background noise is still there. Hard to hear what they're saying.”

Next I played the same clip again, this time with the surround processing engaged and with the rear speakers off. “How was that?”

“Better. I could actually hear what they were saying that time.”

Finally I played the same clip again, this time with the center channel volume turned way up, the front left and right volumes turned way down and the sub off. “How was that?”

They actually turned to each other. Mr. Deaf smiled. Mrs. Deaf smiled. My heart grew two sizes larger. A unicorn grew its horn and a leprechaun found a lost pot of gold! “That was MUCH better. I could understand everything that time!”

Like some kind of shaman, I had restored the man's hearing! I hadn't unstopped deaf ears! I had returned sound to where there was none! I had... OK, not really any of that, but I HAD given back his ability to watch and enjoy CSI again. (OK, maybe I shouldn't be so proud of that...)

The great thing about a surround system is that it isolates the majority of the dialog into the center channel speaker. And once the dialog is there, you can individually raise the volume of just THAT speaker, making dialog louder without raising the volume of anything else. And if other sounds are still too prevalent, you can turn those channels down, and with bass management, pretty much eliminate bass altogether.

Is it still a home theater experience? No, of course not. Are you missing out on some sounds that the director intended? Absolutely! Will you be able to relive the Jurassic Park foot stomp? Totally not at all! But, if all you want to do is to be able to hear Jim Nantz say, “Tiger is on the tee at seven...” or CSI explain exactly what kind of flesh-eating bacterium was used or that the weather today is going to be humid and awful, then a surround sound system might be exactly the solution. Even if you could care less about surround.

Been reading your blog off and on for a while now. Since you brought up seniors and their challenges with technology. I was wondering what do you think would be a good senior friendly remote control? It ideally should have macros/activities and yet still have decent sized buttons. I've not yet come across anything like it.