AKA: Why Sony is uniquely positioned to deliver the next level of home entertainment.

Some of the biggest news out of CEDIA this past September was talk of higher resolution – 4K – projectors; namely the new model from Sony and the four offerings from JVC.  And whether you like the idea of 4K or not, think it is stupid and pointless and beyond the ability of most people’s eyes to resolve image detail that small, or would prefer other improvements like more color bit-depth or higher frame rates, the truth is, you, dear member of the buying public, do not get a say.

Just as with 3D, 4K shall be coming whether you want it to or not. (Fortunately, from everything that I can tell, 3D will not make you go blind or feel like clawing your eyes out of your very skull. So there’s that. And while you can argue that there is no real UPSIDE to moving to 4K for most people, I also can’t discern any DOWNSIDE to it either. It’s not like a sharper, higher resolution image is likely to case anyone any viewing discomfort.) And to look at this chart, you would think that your life has been a giant, low-resolution mess up to this point with all the extra detail that you’ve been missing. 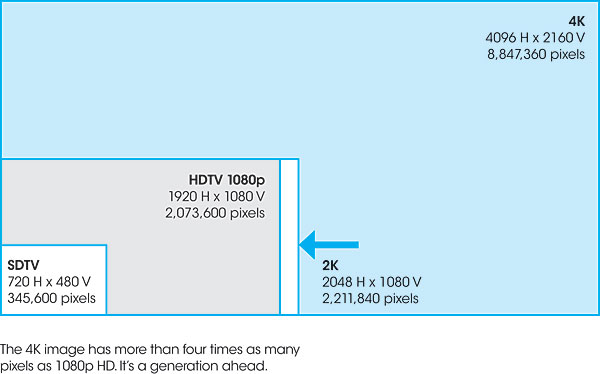 You see, it appears that Japan has already decided that 4K will be the next video craze to sweep the marketing departments. To go along with flat-flatter-flattest, bright-brighter-brightest, dark,-darker-darkest and, umm, 3D. They can go no thinner, brighter, darker or 3D-ier. But they can add more resolution. And, so Sony and JVC are. And that means that everyone else will follow. And I fully expect CES 2012 to be the year of 4K, and think we’ll see 4K flat panels from more than one manufacturer. (Check back in a few weeks to see if my prediction was on the money or not.)

In fact even YouTube has jumped on the “We can handle 4K!” bandwagon. Surely *exactly* what this country has been missing when it comes to viewing vomiting babies or monkeys licking themselves. And what better way is there to watch the highest resolution of someone’s emotional breakdown being autotuned than on a 120-plus inch screen in full 8 million pixel glory?

But there is one giant thing that separates Sony and JVC’s approaches to 4K projection. (OK, two giant things. One is undeniably the price; the Sony model is clocking in just shy of $25,000 while the JVC option starts at $8,000.) But the REAL difference between these two approaches is the JVC is using some pseudo-tech sleight-of-eye trickery to achieve a quasi-on-screen 4K resolution (eShift) from a 2K chip. Sony’s 4K is the real, 4,096 x 2,160, 8.8-million-pixel-delivering, D-cinema deal.

Now I’m not going to discuss the merits of these two approaches – though I think that the JVC approach will be far more commercially successful due to its far more consumer-friendly price point – or my opinion on 4K in general – I could barely see a difference in moving video, but did notice some real improvement in still, high-res photographs, especially around the edges and in fine-detail area like, say, a lace doily  – but rather why I think that Sony is uniquely poised to deliver and dominate the 4K viewing experience.

Let’s start with the biggest elephant in the room: Content. Here’s a quote from Shane Buettner from cable manufacturer, AudioQuest, in response to a question I posed to him about HDMI cabling for my latest column on 4K:

“Before talking about the HDMI cable requirements for 4K video, let's note that there are no 4K consumer video formats currently available and a 4K source is not required to drive the (very) few 4K displays that will be introduced to the market this year. In fact, our understanding is that at least one manufacturer's 4K displays are not capable of accepting a 4K source of any kind. Typically, the 4K display will upconvert the incoming source material to 4K internally, which, for the foreseeable future, will be 1080p at most.”

Yep, you read that correctly. There is currently is NO 4K content. That’s right. None. Nor will there likely be any “for the foreseeable future.” (OK, there IS YouTube. And for all of you people screaming about the death of physical media, I hope you got that dedicated T1 pipeline installed in your home or *really* enjoy watching that spinning "buffering" wheel.) Or unless buy your own 4K camera and create your own 4K movie and then stream it from a hard drive to the projector, you are not going to get anything in native 4K resolution. But that’s OK. If you jump into the time machine and set it for just a few years ago you’ll remember that when the industry moved to 1080p, there was no native 1920x1080 content either; everything was either 720p or 1080i. But that didn’t stop TV companies from the shift to 1080p, nor did it stop you from having to buy the higher resolution set. And then Blu-ray (and HD-DVD) arrived and 1080p content was in abundance to feed the hungry mouths of all those waiting pixels. The tech world has always had a very chicken-and-egg, if you build it, they will come mentality.

So, how is Sony poised to overcome this? Well, they just happen to OWN a movie studio. Yep. A pretty giant one called Sony Pictures.  (Maybe you’ve heard of some of their films; like James Bond or Spider Man?) And they OWN a movie post-production facility. (You can see my behind the scenes tour of it here.) Think that JVC, Samsung, LG, Sharp, Panasonic or (shudder) Vizio can say either of those things? Nope. And Sony is already doing all mastering work on their lot at 4K. So Sony not only can they, they literally ARE creating AND mastering their films in 4K resolution. The content is there, waiting. And Sony is in the *totally* unique position of being able to ensure that 4K gets a big push from the content side.

And, Buettner's “one manufacturer's 4K displays are not capable of accepting a 4K source of any kind” comment points out another big difference between the Sony and JVC offerings; while the JVC can conjure and eShift the arguable visual equivalent of 4K on the screen, it can’t accept it as an input. Sony’s can. Via HDMI. And if the video Nazis of the world have taught us anything, it’s that the best kind of scaling is none at all. And if you are buying a home theater projector with the future in mind – and like it or lump it, 4K appears to be our future -- the Sony is clearly the way to go.

But even if there is a 4K master, you would possibly/probably need some special disc pressing plant to create the new discs. Maybe some new manufacturing technique or quality control or even disc formulation with multiple layers. Look, I’m no scientist. But with the size of a 4K movie file being somewhere around 6-10 Terabytes before compression, you can assume that after compression it will be somewhere around 100 Gigs on a disc and *that* will probably mean some kind of new disc design. (PS: Note to Kaleidescape: Get to work on that new Petabyte movie server, stat!)

No worries for Sony, because it is also one of the world’s leaders in Blu-ray disc manufacturing. According to its DADC Website:  “With 15 manufacturing, 18 distribution sites and 11 digital service centers around the globe, Sony DADC offers the highest capacities in media production and distribution.” So, they have the plants ready to manufacture a 4K disc. With their own theatrical 4K content.

But, your current Blu-ray player isn’t going to play any of these new 4K discs. When I posed this question to Sony execs at CEDIA, they responded that moving to 4K is beyond a simple firmware kick-in-the-pants upgrade but rather will require getting a new player; just as when someone wanted to add 3D enjoyment capability.

Gee. I wonder who could make a new player capable of playing some new disc with some new compression that may or may not even exist yet? If only there was some one. Oh, wait. Yeah. Sony. Being a founding member of the Blu-ray Association, they could build this player. They would have a giant head start too, because, well, they would be making the discs to play in this player and would then know *exactly* what such a machine would need to be capable of doing.

So, in Sony, you’ve got a company that is totally positioned from the “lens to the living room” to deliver 4K into our homes. From creating 4K content, to mastering 4K content, to replicating Blu-ray discs, to manufacturing Blu-ray players, to building a projector that is designed to play native 4K material.

Sounds like a perfect readymade purchase-bundle opportunity that ONLY Sony could offer: Buy our new 4K projector with our new 4K player and get 6 Sony 4K Blu-ray titles.

Sony, the 4K ball is totally in your court. This is a “format” war that you are in a unique position to dominate should you choose to. And, you know, not totally Betamax, DAT-tape, Minidisc, or MemoryStick this thing up.

Reply Anthony Ramos
11:54 AM on December 29, 2011
As with 3D, the best 4K delivery solution for the home is likely to be Blu-ray Disc. ?The physical format can do it,? declares Don Eklund, executive VP of technologies at Sony Pictures Technologies, thanks to new compression algorithms. Most notable is HEVC, or High Efficiency Video Codec, which is now in advanced development. It?s considerably more efficient than the AVC codec now commonly used on Blu-rays while remaining similarly free of artifacts, and it will allow a 4K film to fit on a mass-replicated 50-gigabyte, two-layer Blu-ray Disc. ?I?ve seen samples of what that codec can do with 4K at a 30-megabit-per-second bitrate compared to what AVC can do at 50 Mb per second, and it actually looks a little bit better at 30 than AVC looks at 50,? Eklund says.