A little over four months ago, Kaleidescape unveiled an industry leading download store that offers Kaleidescape owners a revolutionary way to add content to their systems, by easily browsing and purchasing movies that automatically downloaded to their systems. Kaleidescape installed a fiber link between its Sunnyvale facility and its data center and can support download speeds in excess of 60 Mbps, meaning that you can often download a movie more quickly than you can get into the car to drive down to Redbox, Wal-Mart or Best Buy and days faster than waiting for the Netflix or Amazon.com discs to arrive in the mail!

The biggest hurdle that downloading has faced amongst movie collectors has been the choice of quality (disc) over convenience (download/streaming). With other download/streaming options (Apple, Netflix, Vudu, Amazon, etc.), movies are not in the same quality as the disc, and also don’t feature any of the additional bonus content. Kaleidescape completely addressed this qualm by eliminating any differences between a digital and physical version. This means that not only are sound and picture quality exactly the same between the digital and disc versions, but downloaded titles also include all of the extras on the physical disc: bonus features, making of documentaries, deleted scenes, alternate endings, commentaries, subtitles and language tracks. If it was on the disc, it will be included with the download.

Kaleidescape’s download store has been in Beta for the past four months while Kaleidescape monitored member feedback and response, and continued adding titles to the service, and there have been more than 12,000 downloads in that time. Today the store breaks out of Beta and into full operation, and now it is time to witness the download power of this fully armed and operational battle sta… I mean, as of immediately, the download store is offering the only way for people to legally purchase and download movies in full Blu-ray disc quality including all supplements, extras, language and subtitle tracks! (Insert GIF of fireworks exploding!)

Within minutes of the store opening, one exuberant owner purchased nearly 30 HD-quality downloads, and the first title purchased by a non-Kaleidescape tester in Blu-ray quality was The Dark Knight. I downloaded the HD version of The Hobbit: An Unexpected Journey, and the 53.1 Gig title took 8 hours and 13 minutes downloading at approximately 14.4 Mbps in two parts, the main feature and the supplements. The HD version of Inception was 55.4 Gigs and took 10 hours and 23 minutes at approximately 11.3 Mbps. Obviously, results will vary based on your Internet speeds, and according to one user on the Kaleidescape Owners Forum, he was able to download The Hobbit at 52 Mbps in just over 90 minutes.

Once downloaded, the films assimilated into my collection and then played back in stunning quality; performing exactly as I’d expect a full 1080p/24 film to look and sound. Rich, deep blacks of the golblin's caves in the Misty Mountains, tons of detail in the Shire and Rivendell, and all the troll-smashing, axe-crashing surround and bombast you’d expect from a DTS-HD 7.1 channel soundtrack!

I also watched quite a few of  the extras on both discs -- the filming techniques from Inception being fasinating, by the way --  which are all clearly listed on the store for viewing prior to purchase. In fact, one of the big improvements to the download store is that it now shows much more detailed information about the film, similar to the on-screen Kaleidescape GUI. The store lists all of the special features, scenes, songs, Rotten Tomatoes rating, and audio and subtitle tracks. There is also a link to instantly search more about the movie on Google. 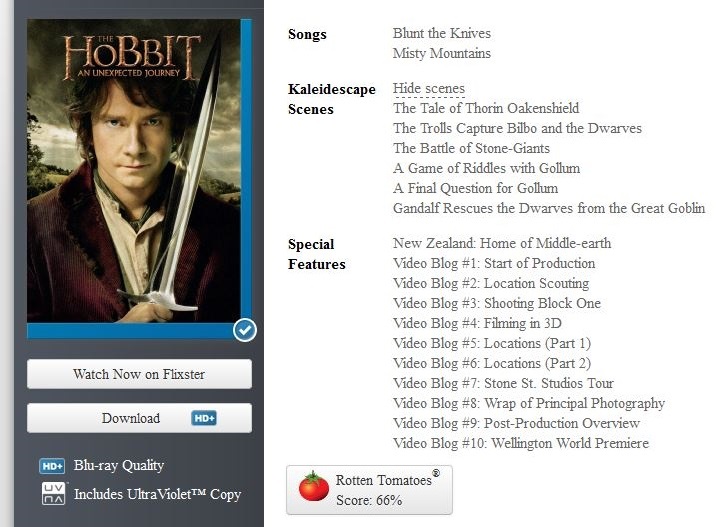 If drive space is a concern – and I’ll take this opportunity to mention that Kaleidescape now supports 4 Terabyte disk cartridges, meaning a single 1U Server can store up to 325 Blu-ray or 1,800 DVD titles – users can elect not to download the supplementary material. Once you’ve downloaded the title – with the supplements – you can delete it and then re-download it without the supplements if you want. (Kaleidescape plans to make it possible to delete just the supplements in a future update to its operating system, now called the much hipper kOS.)

Kaleidescape also plans to add Common Sense Media integration – currently incorporated in its iPad app that you can read about here – which is a perfect resource to check out a movie before purchasing it to see if it will be audience appropriate.

With the download store’s “Buy All” button – and the store “knowing” the content each owner already owns in their collection – it makes it easy to quickly build or flesh-out a collection, such as purchasing all “Academy Award Nominees for Best Picture.” 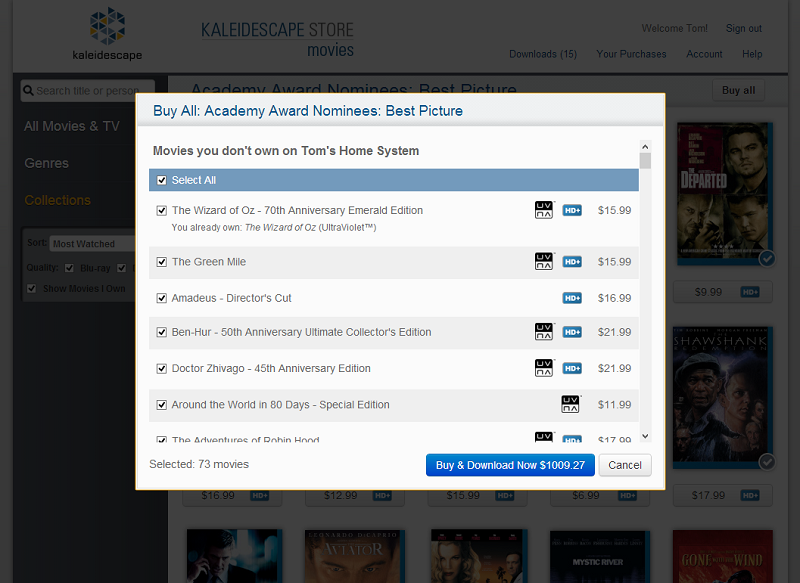 Also cool is that HD downloads also include the rights to download the DVD-quality version. This is crucial for owners that have systems with both new, M-class, and older, non-Blu-ray capable players. (And, yes, you need to have an M-class player to be able to download HD content.) This ensures that they will be able to view any title purchased on all of their systems.

Downloaded titles also avoid the disc-in-drive requirement of Blu-ray discs, meaning users that are reaching the limit on their disc vaults, could continue to adding titles without needing to delete/remove content or purchase a new Vault. (My review of the M700 Disc Vault here.)

Titles are very reasonably priced, ranging from $9.99 for catalog titles, to $19.99 for The Hobbit, to $24.99 for the 70th Anniversary of Citizen Kane. These prices are comparable – and often cheaper – than purchasing the disc. For instance, the features laden, 3-disc Emerald Edition, 70th Anniversary of The Wizard of Oz is $67.97 on Amazon and only $15.99 from Kaleidescape. Kaleidescape’s strategy is to keep pricing as close to the street price of the disc as possible, eliminating any reason not to embrace downloading.

Kaleidescape is also now fully supporting UltraViolet for portable viewing. Any movie that is downloaded that has UltraViolet rights – which is the lion’s share of titles available; including “almost all of the movies you’ve heard of and almost no TV shows at this point,” according to Kaleidescape’s Tom Barnett – will be instantly available in your UltraViolet digital locker. Activating this involves a one-time, three-step process where you link your Kaleidescape account to your UltraViolet account. 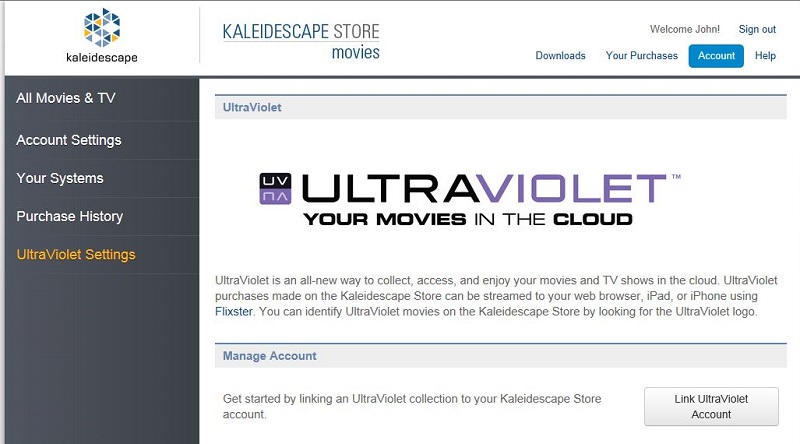 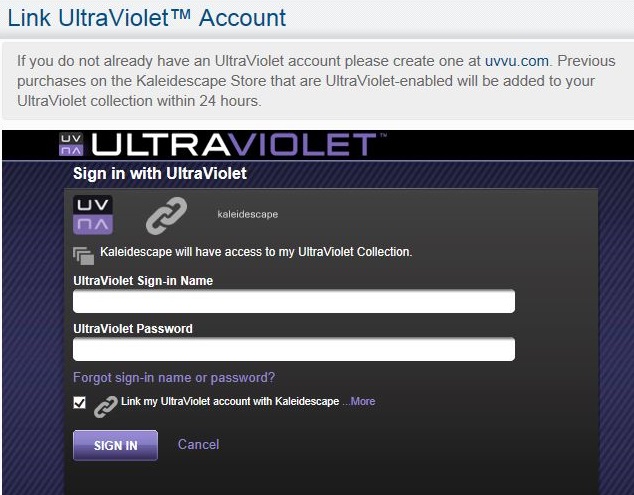 Once linked, all of my previously downloaded titles appeared in my “Movies I Own” collection and were available for downloading or streaming to my computer, iPad and iPhone using the Flixster app. If you own the Blu-ray version of the film, you will be able to watch the HDX version – proving the best streaming quality available – when viewing via Vudu. This gives Kaleidescape owners an excellent option to expand their system by purchasing a low cost Roku, PS3, Blu-ray – or any device that supports Vudu – in other rooms, allowing them to stream their purchased content in high quality.

Along with the high-definition downloads, Kaleidescape has given the store’s look a facelift; taking customer feedback and improving the browsing/shopping experience.

For myself, I often felt like I was always seeing the same 50 or so titles whenever I visited the store based on the way the site was organized by “shelves” of different collections. The old layout required a lot of clicking and made it difficult to tell how many movies were available for download. Now the default view shows all titles (currently 100 per page), and the initial reaction will likely be, “Wow! They added a bunch of new movies!”

The home page features new sort options – by Title, Top Sellers, Most Watched or release year – allowing individuals to browse movies in the way that suits them. 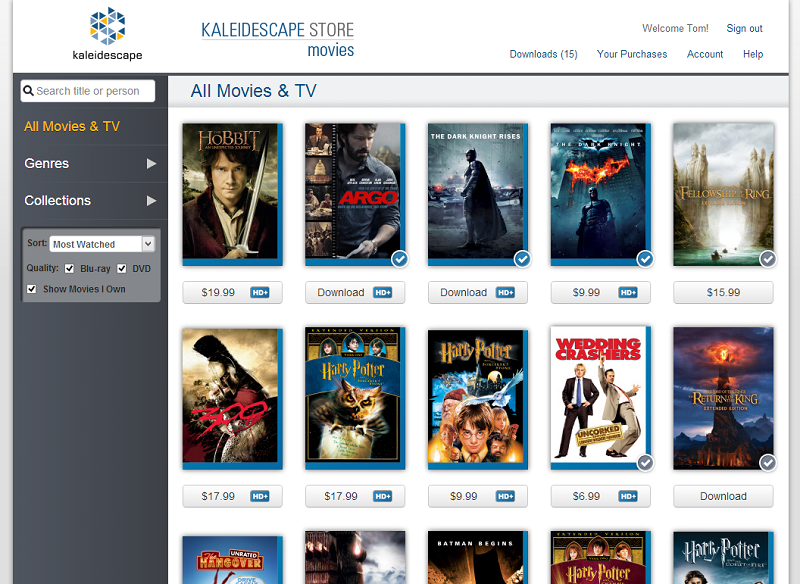 You can also easily filter the titles displayed, showing just Blu-ray titles (currently 516), whether or not to include titles you already own (useful to know if you would like to upgrade from a DVD to an HD version) or see all 2634 titles. Kaleidescape also cleaned up the look of the graphics, going to a more subtle checkmark to identical if you owned a film already; blue for the HD version and grey for the DVD version.

A genre and collections tab allows another option for browsing, and both include the same sorting options and filtering options as well. Of course, you can also search either by movie title or person’s name. 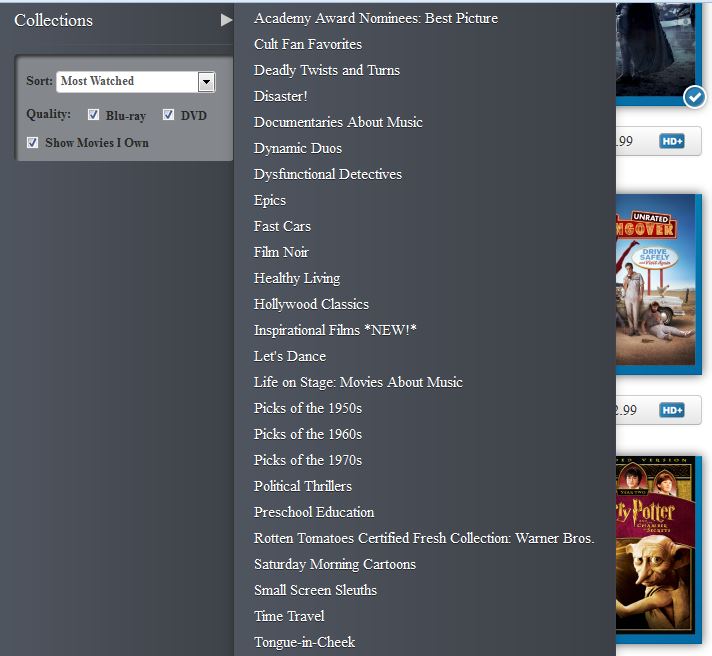 Way cool is the ability to upgrade films you already own in DVD to Blu-ray quality for a very reasonable $6.99.

Currently, the $6.99 upgrade pricing is only available on titles that you previously downloaded, but shortly – wink-wink, nudge-nudge, maybe wait a couple of weeks – Kaleidescape plans to offer this upgrade deal for any DVD in your collection to Blu-ray quality (provided one is available at the store) for the same low-low price. When this becomes available, Kaleidescape plans a feature that will enable users to sort the movie list to see only movies that are available for HD upgrade. Nice! I’m standing-by to bring my non-HD Lord of the Rings and Matrix films up to date, and already upgraded my previously downloaded version of Inception!

To support the new HD quality downloads, all Kaleidescape systems will automatically upgrade to the latest version of the Kaleidescape operating system, kOS 5.1. This latest update also includes some cool new features, including a much richer information bar when pressing “Info” while watching a title. One cool feature will be a list of all songs available in concert or musical titles, with the current title being highlighted and the ability to easily select and jump to another song. 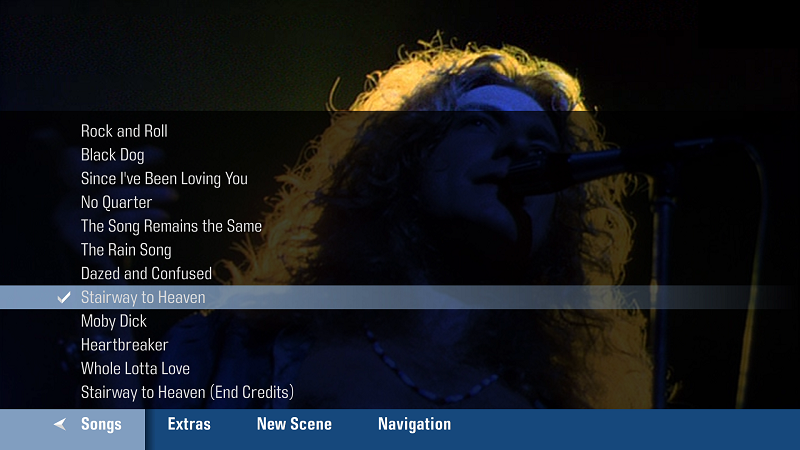 (Though, seriously, if you have to call up Led Zep to find out that Stairway is playing, you should probably just stop listening to music and go read a book or something.)

This will also work for browsing Extras, letting users view all of the title’s additional content to be able to jump to a favorite short, documentary or featurette. In a multi-disc collection, extra content is blended together into one list so you can see all of the additional features in one easy to navigate list. 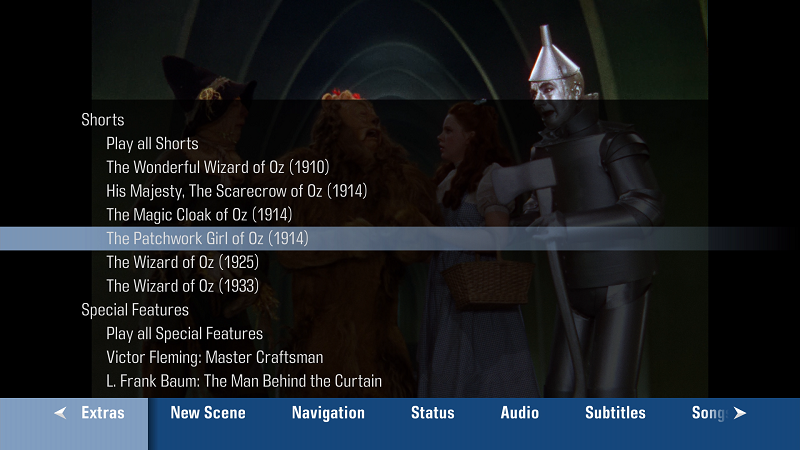 Selecting Audio will also display more information such as, “Commentary by Roger Ebert.” 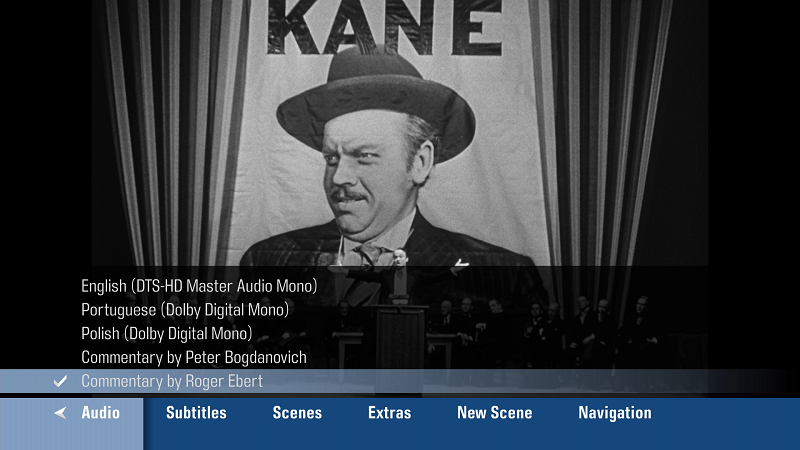 While the Kaleidescape Movie Guide team has hand-selected and bookmarked thousands of the funniest, scariest, most action packed, and emotionally charged scenes from the most popular movies of all time, the “New Scene” option enables users to easily bookmark their favorite scenes for easy recall.

With the download store now fully operational, Kaleidescape has once again proven why they are the industry leading video server provider. Kaleidescape has expanded an already awesome system and now offers owners an easy – and less expensive—way to upgrade DVD content to Blu-ray quality, provides automatic UltraViolet rights for easy mobile playback, and delivers a single, easily managed library for aggregating and viewing their entire collection of existing DVD, Blu-ray and downloaded titles. For movie lovers, there is still no better solution.

Reply Jim Z
7:51 PM on April 25, 2013
Is UltraViolet the only way to upgrade to Blu-ray quality? Even if the original download was from the Kaleidescape store? I would rather just buy it again and delete the SD version.

Reply eztv proxy list
10:12 AM on July 18, 2020
Hello, I have browsed most of your posts. This post is where I got the most useful information for my research. Thanks for posting, maybe we can see more on this. Are you aware of any other websites on this subject.
https://limitlessreferrals.info/eztv-proxy-list-unblock-torrent/