Tired of eating it

You might be surprised to find out that a large portion of my job at CTA is surprisingly UN blogging related. Oh, it’s true! I actually have a whole host of other things that I do here “at work” that don’t involve me blogging at all. There’s payroll, there’s entering bills and paying them, there’s scheduling, there’s ordering, there’s meeting with clients, there’s the times when I’m actually being a custom installer and installering things, there’s that blasted infernal phone that won’t stop ringing, there’s throwing away all of those faxes for “DO YOU WANT LOW COST HEALTH CARE!” (which is technically a question, not an exclamation) or “LOW COST CANADIAN PHARMACIES!” or “YOU’VE BEEN AUTHORIZED FOR A FREE 3 DAY MEXICAN VACATION!” Considering that the cost of ink for our printer is just slightly less than processed unobtanium,  I actually wish that these people would get with the 21st Century and just spam my AOL account like every other Pen1s enlargement firm does. (Also, when you reply to the “Call this number to have your number removed from our list” don’t you just feel like you are *totally* setting off a flashing red light in the “Hey! This number’s a hot lead! Make sure you put a star next to it!” department?)

So, I’m going through a pile of worksheets, which I enter into the computer to generate bills that I send out that in turn generate checks that I deposit, that in turn generates the weekly gots-to-gets-my-paper that keeps me coming back for more. This, Simba, is the REAL Circle of Life, Hakuna Matata very much. But I find that I am writing a big “N/C” on many of the worksheets lately. “N/C” is my little script for No Charge. Or “Lost Money.” Or “No can bill customer for this.” N/C does not make me happy. N/C does not make me forget that I have a Lady Phone. N/C does not get me any closer to laying by my pool all day fanning myself with an iPad as I listen to music on another iPad while surfing the Web on a third iPad.

So, why the N/Cs? They are all for BS service calls that are due to stuff breaking that I can’t justify billing the customer for. Let’s start with the first one shall we? Did a dental office where we installed an XM receiver. Connected, activated, worky worky, leavey leavey. Except the next day, no worky worky. “Check Antenna.” Brokey brokey. So we had to drive up to the office, do some troubleshooting, confirm the antenna is good, retrieve the unit, order a new one and then return to the office to install it. This whole slow dance in a burning room took about 5 hours of time. Can’t really bill the dentist. I mean, he wanted a working XM radio. Not his fault that it broke. So we are out about 5 hours of labor due to the fault of a $79 radio. And to really boot grind some depleted uranium into this wound even further, we bought the frickin’ radio at Best Buy AT RETAIL because it was just faster than ordering it and waiting for it to ship in to make an extra $14. So, this job is really a massive red gash in the loss column since we didn’t even have ANY profit in the product that broke to fall back on.  Huzzah!

OK. The next one. Ahhh, yes. A part of a customer’s remote that broke. After it was installed for ten days. Not broke like he dropped it on his tile floor, but broke like the RF receiver just locked up. And because when the customer sprang for a $650 remote, I’m sure in his mind that meant working beyond the first 14 day usage period. This only took an hour and a half because it was nearer, but that’s still 90 minutes of billing that I’m eating. And it tastes like a crap sandwich. And not even like free range cow crap. These are shot up with hormone cows. And the hormones taste bitter.

Here’s another. Repairing a customer’s speaker.  (You can read more of this story here… ) So far, we’ve been out to his house for two N/C visits for this problem with – hopefully only one – another trip remaining. Trip one, “Yes, something is wrong. Definitely hear that distortion. Looks like a bad bass driver. Let’s get you a new one.” Second trip. “Well, we’ve taken your speaker apart, installed the new driver, totally put it back together, now let’s take a listen and Oh F---! That wasn’t the problem!  Looks like we need to order an amp. See you next week…” How can I bill my customer for this? He’s barely had the speaker a month, plus he’s been a good customer. Just cost of doing business, I guess.  N/C and into the pile. And meanwhile I’m binging on another junk meal of lost revenue.

Here’s another that I guess I *could* bill for, but its’ just easier to file under “customer incompetence” or probably more accurately “poor installer/client education.” Guy bought a new Control 4 system. Then said it wasn’t changing his radio channels. (Really? You actually listen to FM radio? You know we only get like 2 stations here, right?) Send a tech. Guy is pushing the up/down buttons. Not the skip forward and back buttons. Only 15 minutes in the house, but there’s the drive there and back and the stress of cramming it into the schedule’s cram hole.

So, what to do? Are these things that just have to be chocked up as the cost of doing business when you are selling service as much as anything else? But, really, I can’t think of too many other trades that are forced to eat what we do. The usual answer amongst other retailers is, “OK, bring it in and we’ll take a look.” Well, that don’t work with our stuff now does it? Which of your customer’s could possibly bring in any of your gear and then, oh, here’s a laugher, actually REINSTALL it! Ha! I can’t get my people to change batteries in their remotes with any level of confidence.  And most customers want to COMPARE you to Best Buy and Costco – especially when they are pricing things – but they sure don’t remember you matched that low-low price when the stuff breaks and now they want Tiffany’s service. I really want to say, “Uh, yeah, well the thing about your broken part is, you had us match BB’s price. So, we’re also matching their service. So, just bring that 52-incher on in here and we’ll take a look. Thanks and ba-bye!” 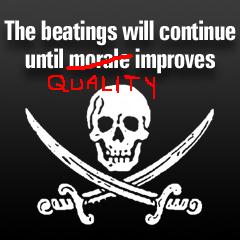 It just doesn’t seem fair that I am always the one that should have to pay to absorb these things. I mean, I did my job. I sold it to the customer. I ordered it. I installed it correctly. And I paid my invoice on time. Why do I have to also shoulder the burden when it breaks almost straight out of the box? Shouldn’t manufacturers share any of the burden of these types of service calls when it is their stuff that is making you go back? (For the right way to rub a sweet, cooling balm on my razor –chaffed anger burn, see how Niles handled some service call issues. Note: You want me to NOT be pissed about fixing your problem, give me an $800 touchsccreen. ) If I billed Company X $60 plus travel every time I had to go and fix or retrieve or service their product while it was under warranty would this make them start beating those assembly line workers into tighter production standards? (OK, maybe not *beating* per se, but maybe turning off the air recirculators or making them use a smaller pee bucket or making them listen to Justin Bieber all day. Something.) The suggestion box is now open...