OK. Maybe they need to convene an ecumenical council or something, but I am DONE trying to convince Mr. Cooper not to buy things. So when he called yesterday and said that it was time, I knew what he meant. It was time to buy *another* $1000 power cable. And you know what? The only thing I asked was how long (1 meter) and whether he wanted it next-day delivery or regular. (Next day, of course.)

Yes, I will fully cop to the fact that by not putting up a fight or trying to tell him what else he could be spending his upgrades moneys on that I am now guilty of helping to enable his mania. And if this makes me the audio equivalent of the guy that stuck the last needle into Belushi’s arm, well then I can’t help it. I’m done feeling guilty. Like that guy, at least I know that I’m selling Mr. Cooper the good sh—at a good price. When you tell someone straight up, “Do NOT buy that. It is NOT going to help you. Please do NOT make me order that for you” and they tell you they don’t care they “gots to try somethin’,” well, I’m absolving myself of any guilt.

You can read my previous struggles against the madness here:

The Customer’s always right even when he’s crazy

Mr. Cooper: No, you can’t buy that

The part that has taken the longest for me to just “Let go, Luke!” is that I am selling him products that I truly feel in my heart-of-hearts will NOT help him or his system one audible dB. Now, that doesn’t mean I don’t believe that he isn’t buying some fantasmagorifficly awesome stuff. He is. I mean, I would LOVE to have the stuff he is buying. But a $1000 power cord is SO far down the list of upgrade spending in my future, I can’t even see it on the list. (What is on my upgrade list is a new multi-port pool filter valve and chlorinator. And what a *fun* $169 upgrade that is!) And I think if Mr. Cooper owned a Krell this or a Wilson that or lived in a house that didn’t share three common walls and have horribly dirty power and he had upgraded that 34-inch CRT TV like we talked about or bought the PS Audio Power Regenerator that I actually DO think will solve his problem; if he did that and like 100 other upgrades, then sure; knock your bank account out with some cable purchases.

So, his new cable just arrived. And instead of talking him out of it, I thought I’d share a few pictures of it for you to enjoy and tell you a bit about the cable. You know in case any of you are harboring latent cable upgrade-itis. Look, I've embraced my role as a pusher now. I gotta find that next junkie...

You might think that this cable was straight from Valhalla or the Mines of Mordor or packed with enough Dilithium Crystals to reach a previously unheard of warp factor or woven from crystalized strands of angel tears. And they might be. But they are even more filled with copper. Sweet, pure, never been minted into a penny, copper. 8 Gauge, pure PCOCC copper in multiple gauges and shapes to be exact. From PS Audio’s site: Inside the AC12 are four hollow PCOCC conductors for the treble regions, one massive PCOCC rectangular conductor for the midrange, multiple gauges of PCOCC bundled together for the bass. And believe me, it’s the mo-better bass that gets Mr. Cooper’s cable spending moneys excited! In fact, if there was an AC-14 "Now with even more expensiver bass!" I already have their first customer ready to go!

“The PerfectWave AC Series represents our crowning achievement in the art of power cable construction and the PerfectWave AC12 is the king of the entire series. This is one killer sounding power cable and for those lucky enough to own a few, (I love how they say “own a few.” And, well, I think this is Mr. Cooper’s fourth one so, well, I guess he IS that guy!) stand back and prepare to be amazed.

One listen to the AC12 and you'll wonder why you ever tolerated anything else. (Funny story. He tried a lower series, the AC10. And by lower, I mean it was like $700 instead of $1000. Had it for a day, and then decided he couldn’t tolerate anything less. Returned and upgraded to the 12.) Openness, purity, killer imaging, transparency, slam - this cable has it all.

Use the AC12 in your most demanding audio situations. Between the wall or Power Plant Premier and your power amplifier, preamplifier, DAC or even the phono preamplifier. Whatever this cable connects to, the sound is jaw dropping. The soundstage opening up in ways perhaps you didn't even realize your system was capable of. (Even when your system is made up of a PlayStation 3, a generations old Pioneer receiver, and bookshelf speakers!) It's all there, and with the AC12 you get every bit of sound. It is our finest power cable ever and we absolutely guarantee one listen is all you need to hear what we're writing about. The AC12 is that good.”

This first picture is from the PS Audio Website:

Now while that is a beautiful picture, it doesn’t really do the cable justice or show it in any kind of scale. Here is Mr. Cooper's cable next to a 3/4 inch piece of conduit, a typical power cable, an HDMI cable, a King Size Sharpie and a banana. (Note: price of all other items is less than the sales tax on the power cable... Including the banana. Which I bought at Super Wal-Mart.) 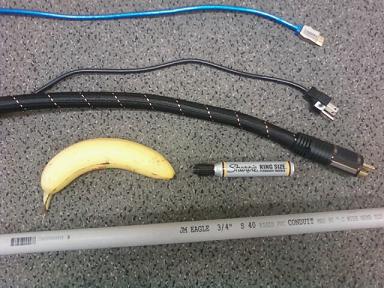 If you still need to know more about the magic which is the AC-12 power cable, then click over to PS Audio's site and enjoy their thorough description of just what makes this cable the possible harbinger of world peace.