We installed a Control4 system on Monday and Tuesday for what would be considered a “local celebrity.” This entertainer was really into the idea of controlling his house with his iPad and being able to  have remote access to check on his home from anywhere in the world, etc. And during our initial meeting he whipped out his iPad and showed me the Control4 demo software app he’d downloaded.

“See this? I can control everything with this. This is great! I want to get something exactly like it. You ever heard of this system before?”

“Control4? Why yes. In fact we’re a dealer. You can come by our store and see that iPad control actually working. It does our lights, our thermostat, automated door lock, audio/video control. It’s great.”

“Perfect. I want it. Let’s do it. My assistant will bring you a check.”

So I worked up a quote to redo his house; replacing his old 2-channel amplifier and 10-pair speaker selector with a 16-channel Control4 amp; replacing a dozen of his totally bizarre and nougat light switches (like these things were ca-RAZY weird! And I know what you’re thinking; "John, how weird can a light switch be? Light goes on, light goes off. It's not brain surgery." But no, these things were like miniature Mind Traps. And it seemed like every switch worked differently – tap here; push there; push and hold here; double tap here; Morse code tap the word l-i-g-h-t here – to get it to work, and turning on a light was akin to a secret IQ test where the results were immediately demonstrated to the entire world in pass=lights, fail=no lights format) with new Control4 automated switches; wire in some new in-wall rear speakers; add a touchpanel controller in the kitchen; add control for his new living room TV and surround system (a pretty cool install, I must admit; where the TV stores VERTICALLY in the taller-than-it-is-wide cabinet because he wanted a 52-inch TV in a space for a 42-inch set; then the set pulls out on an arm and swivels 90-degrees to horizontal for viewing. We also attached a Monitor Audio all-in-one left/center/right speaker that handles his front channel theater sound, tracking the movement of the TV position). All of which is, of course, controlled by his and her iPads.

So we do the majority of the wiring and retrofitting on Monday. And I have to say, it has been a while since I’ve been out in the trenches and in the field of install. I’ve grown used to sitting in my comfy chair, rolling around in the eternally light, 70-degree warmth of office living, writing checks and ordering product. When I first started, I would have been out there, bundled in a jacket and gloves, pulling wire and cutting holes, installering stuff and programmering systems. Now I’m more manager-type. Well, Monday I was back to blue collar, installer work. Literally. As in I wore a blue collar work shirt. So one of the things I did was retro the wiring to the rear speakers and then measure and cut out the new surrounds. And I have to say, when you’ve been away from “the game” for a while, that first move when you jab a drywall saw straight into a guy’s perfectly virgin, smooth and just-been-painted wall, that is a real gut-check moment. “Did I measure correctly? Are my lines level? Are my speakers symmetrical? Am I sure there’s no hidden stud here?” But, that part went fine. I’d say like riding a bike, but unlike riding a bike, I’m just as likely to cut into a water pipe or electrical line my next go round... (Also, I found that sitting all day on a hardwood floor identifying, labeling and terminating speaker wiring is not as good for my back as it used to be. I heard a low, pained cry in the not-so-far-off distance, which at first I mistook to be The Peat Monster coming to seek his smokey, peat-ey revenge. But then I realized it was just my back; crying out for some liquid, high-alcohol-content medication and a nice warm bath.)

So we have had some fits with the Control4 thermostat before. As in, for weeks our store was like 85 degrees plus in the summer because it didn’t cool correctly. Everyone blamed me because I tried to be green-ish by putting in a schedule that cut the A/C at 6 PM (when we close the store) and didn’t run it all night until we opened the store at 10 the next morning. “It’s getting too hot,” they said. “The system can’t recover,” they whined. "You're taxing the A/C by letting it get too high," they opined. Then we got that fixed and that was fine until November. When it went from hot to cold. And then we had to endure several weeks of low-60s temp this winter when the heater part didn’t seem to be heatering. So, we updated firmware and software and changed some programming settings -- none of which made sense but hey, gotta try somethin' -- and we finally SEEM to have our heating-cooling situations ironed out. But having been stung by the harsh reality of working on the Rebel Ice Planet, Hoth, for several days -- where we literally warmed our back office to a livable temp with a portable kerosene heater that kinda/sorta looks like a Top Gun jet on afterburner -- I can see how a local celebrity would be, say, less than patient over waking up and finding out that his home had tried to silently kill him by plummeting to 60 degrees while he was sleeping.

So, to stave off any of these little buggly boos before the homeowners returned from their vacation, my programmer added in a little “safety net” line of code to their programming. Essentially an if/then statement that said, “Yo, Control4! If you see that the temp in here has done something crazy, like, say drop below 65, let us know. Stat!” Specifially let ME know by sending me an e-mail. So, I wake up this morning to see this in my e-mail in box: 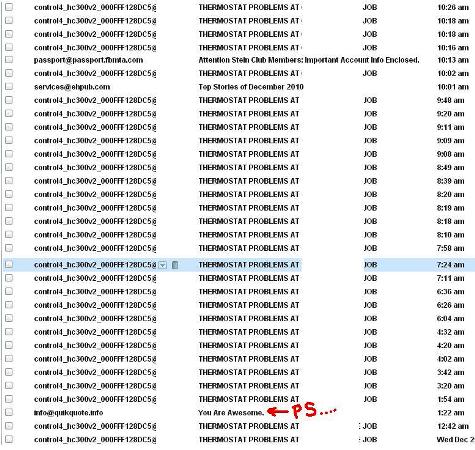 Hmmm, says I again. The living room hallway sensor is reading 60 degrees and the master bed hall is reading 63. Well that just doesn't seem right. No, not right at all. In fact that seems like EXACTLY the kind of thing a home owner is apt to notice. Inside of his house. That he is expecting to be warm and cozy. Because he's kind of a somebody in this town. So I’m racking my head-brain trying to figure out what in the hell I’m going to do to resolve this issue before the homeowner gets home...tomorrow.

So I’m going over the hook-up with my installer and I keep saying “The white wire to W1” and he keeps saying, “Yeah, white wire to W2,” and this is going on for a bit Three Stooges style, until I think, “Hey, wise guy! White wire to W-wub-wub-wub-wub-1 not W2, right?” Then he says no, he hooked it up just like I said, wire for wire like the old Honeywell system. Which was W2. Right like the picture on Lady Phone shows. Right like the e-mail that I sent him says. (Damn! I checked. And he's right. DAMN!) Then I pull up the Control4 t’stat install guide with a big X on W2 saying “Heat Pump – not used” right next to W1 where it says “Heat Pump – auxiliary heat relay”. (I’m saying all this stuff like I understand what the hell I’m talking about. You can either A) Be impressed at my immense level of HVAC system installation knowledge or B) Know that I’m just reading random words and symbols out of a manual and using the full focus of my frontal lobe to try and match up wire color for color.)

So now I’m off to rush over to the home to switch all the W2’s to W1’s and hopefully bring a little heat into this house before the homeowner arrives to discover that I’ve turned his million dollar casa into the most expensive meat locker in the entire state of South Carolina...